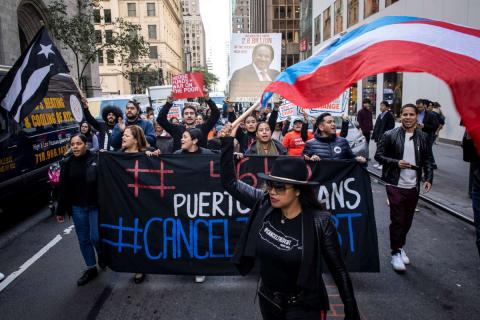 Activists and Puerto Rican community members protest against Steven Tananbaum, a board member of the Museum of Modern Art (MOMA), for his involvement in a hedge fund that owns over $2 billion of Puerto Rico's debt, outside of the newly renovated and reopened MOMA in Midtown Manhattan on October 21, 2019, in New York City. Drew Angerer / Getty Images

Since its announcement, the POA has been touted as putting an end to five years of brutal structural adjustment. For instance, Natalie Jaresko, executive director of the unelected Financial Oversight Board that has dictated Puerto Rico’s finances since 2016, celebrated the POA as a “new chapter in Puerto Rico’s history.” Gov. Pedro Pierluisi suggested that while the POA is “not perfect,” it ultimately protects Puerto Rico’s vulnerable public sector. In contrast, a multisectoral coalition of teachers, labor, pensioners, students and activists expressed immediate rejection of what they call the “plan del tumbe” (the shakedown plan). These groups have long been demanding a comprehensive debt audit, calling attention to the POA’s everyday implications, and resisting its confirmation by mobilizing online, in the streets, the legislature and the courts.

Rather than a “new chapter,” the POA affirms a debt that has not been meaningfully audited and that forecloses the pursuit of legal action against banks and underwriters as well as debt illegalities that the Financial Oversight Board itself previously challenged in court. Despite rhetoric from powerful political and financial elites in Puerto Rico and the United States, the POA will bring little relief to Puerto Ricans struggling under the weight of crushing austerity in an archipelago that is increasingly geared towards attracting foreign capital and incentivizing the settlement of wealthy North Americans in Puerto Rico as a means of boosting an anemic local economy while Puerto Ricans are increasing forced to migrate in search of economic stability.

As a result of persistent public pressure, the confirmed POA does not cut public retirees’ pensions as earlier versions had proposed, but it does freeze defined benefit pensions for active public school teachers and judges. Additionally, despite Governor Pierluisi’s comments that the POA protects the public sector, there is no doubt that since the passage of PROMESA, Puerto Rico’s public sector has been significantly scaled back and weakened in order to service the debt in a process that the POA upholds and enshrines. Hundreds of the archipelago’s public schools have been closed and the public university’s future remains uncertain, while teachers, police, doctors and nurses have been leaving in record numbers for the continental U.S. due to stagnant wages, cuts to benefits and dwindling resources. For example, in Puerto Rico lost nearly 12 percent of its population between 2010-2020. The slow-motion collapse of the public sector certainly predates the POA and even PROMESA, but it is important to note that the POA does nothing to rebuild or stabilize the public sector. The gutting of the public sector and the failure to address it once again reveals that the POA is not about improving everyday life for Puerto Ricans by protecting them from the effects of predatory debt or austerity. Rather, it is about protecting Puerto Rico’s profit-generating capacity (mostly for those outside of the archipelago and a small class of Puerto Rican elites — the “criollo bloc”) and (eventually) restoring its ability to borrow unencumbered.

Many on the ground question the feasibility of fulfilling an estimated $3.4 billion in annual debt service and pension obligations in the midst of overlapping climate, economic and public health crises that render daily life a struggle for working people. As the new year begins and the POA is set to take effect in March, Puerto Ricans are facing ongoing precarity, including a potential additional wave of public school closures, a 16.8 percent hike in domestic electric bills and an increase in road tolls. An influx of wealthy investors — particularly cryptocurrency enthusiasts — have contributed to local displacement and real estate speculation as they acquire property and use Puerto Rico as a tax haven facilitated by incentives such as Acts 20, 22 and 60.

Debt service projections rely upon a mix of structural and fiscal reforms (austerity) and an economy propped up by the anticipated disbursement of federal funds to address the hurricanes, earthquakes and the pandemic that the Puerto Rican government does not control. Furthermore, economic indicators point to Puerto Rico returning to budgetary deficits by 2036. All this throws into question the sustainability of a POA projected 25 years into the future and Puerto Rico’s ability to fulfill basic public services. Nonetheless, mainstream media portrayals present the POA as a necessary “resolution” to the bankruptcy and a step toward Puerto Rico’s recovery. A quick search of news related to the POA will show headlines peppered with laudatory phrases proclaiming the imminent end of Puerto Rico’s financial woes. It has even been framed as a crucial step towards Puerto Rico’s political and financial sovereignty.

The POA will bring little relief to Puerto Ricans struggling under the weight of crushing austerity in an archipelago that is increasingly geared towards attracting foreign capital.

In an op-ed for the Wall Street Journal, Natalie Jaresko and David Skeel, the executive director and chairman of the Financial Oversight Board, position the POA not only as a resolution to Puerto Rico’s bankruptcy but also its indeterminate political status. According to Jaresko and Skeel, “Congress is unlikely to step in to make a determination on status until Puerto Rico gets its financial house back in order. Puerto Rico’s crushing debt load has been one of the biggest obstacles to achieving this. That obstacle now has been removed.” Behind the façade of benevolent concern, Jaresko and Skeel’s op-ed makes clear the POA is part of a colonial infrastructure that simply hands down decisions that shape Puerto Rico’s future seeks to strip Puerto Ricans of their political agency. The imposition of mechanisms for financial capture and debt coercion is not a way of resolving Puerto Rico’s colonial status — it is its continuation.

Perhaps the greatest issue with the POA that should not be lost in discussions about whether the plan will lead to a financial recovery for Puerto Rico is that the POA charts a future largely absent the input of the Puerto Ricans who will be most impacted by its devastating effects for generations to come. The POA was conceptualized by the Financial Oversight Board, or “La Junta” as locals call it, and facilitated by the Puerto Rican legislature.

The POA contradicts everything that Puerto Rico’s most vulnerable populations — those most likely to be affected by austerity related to debt servicing — have demanded in order to make life more livable, healthy and safe in Puerto Rico. And this has been made clear during the countless protests that have often accompanied La Junta’s meetings in both Puerto Rico and the diaspora where Puerto Ricans and others in solidarity have attempted to make their voices heard in the rooms where Puerto Ricans’ futures are being decided without them. Additionally, Judge Swain was appointed to oversee the debt restructuring process despite having no experience with Puerto Rico and has shown little willingness to take seriously the concerns being expressed by Puerto Ricans about debt restructuring process.

Every step in the path to the POA’s confirmation has functioned to further remove decision-making power from the hands of Puerto Ricans. The POA’s failure to listen to, let alone address, Puerto Ricans’ very real concerns contributes to the feelings expressed by many that the debt, the failed disaster recovery and all of the financial chicanery devised to lure millionaires to the archipelago have seemingly combined to create a Puerto Rico without Puerto Ricans. In other words, the POA helps bring into being a future where if Puerto Ricans aren’t actually absent, their ability to have a say politically has been severely curtailed.

The Plan of Adjustment provides Puerto Ricans with more uncertainty than resolution, especially since the temporality of debt does not resolve — but rather complicates — the relationship between past, present and future obligations. The POA renders impossible a comprehensive debt audit or an economic plan that responds to working people’s needs, all while endorsing illegal debt and failing to hold the individuals and institutions responsible for indebting the public accountable. Ultimately, the POA leaves colonial, social and environmental debts unresolved and fails to bring a true people’s “resolution” to the debt crisis. Rather than technical solutions adjudicated in the courts among consultants, unelected overseers and lawyers, real resolution might take shape through a reckoning process that interrogates what is owed to whom and the United States’ debt to Puerto Ricans for more than a century of colonial violence and exploitation. A true resolution to Puerto Rico’s so-called debt crisis would include debt cancelation and reparations for historical harms, not payouts for Wall Street vultures who treated the archipelago like a casino.

Sarah Molinari is an anthropologist and Postdoctoral Research Associate at Florida International University. Her research focuses on the lived experiences of debt and disaster recovery processes in Puerto Rico. She is also a co-creator of the Puerto Rico Syllabus, a digital humanities project about the Puerto Rican debt crisis.

More by this author…
Marisol LeBrón

Marisol LeBrón is associate professor in Feminist Studies and Critical Race and Ethnic Studies at the University of California, Santa Cruz. She is author of Against Muerto Rico: Lessons from the Verano Boricua (Editora Educación Emergente, 2021) and Policing Life and Death: Race, Violence, and Resistance in Puerto Rico (University of California Press, 2019). Along with Yarimar Bonilla she is the co-editor of Aftershocks of Disaster: Puerto Rico Before and After the Storm (Haymarket Books, 2019). She is also one of the co-creators of the Puerto Rico Syllabus, a digital humanities project about the Puerto Rican debt crisis.