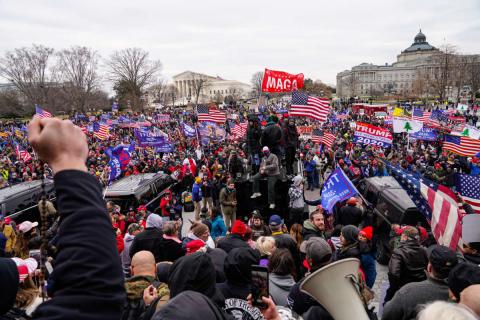 Trump loyalists gather outside the U.S. Capitol for the "Stop the Steal" rally on January 6, 2021, in Washington, D.C.

The United States is continuing its reactionary response to the 2020 uprisings for Black lives. Republican representatives have increased efforts at redistricting, escalated draconian targeting of reproductive rights, and continue to attack education and books on racism, slavery and white supremacy; LGBTQ issues; and content depicting miscarriages, hysterectomies and pain during labor.

These right-wing efforts are fueled by social media and a rising embrace of conspiracy theories. Unfortunately, though perhaps predictably, the Democratic Party has been unable or unwilling to mount a progressive retort.

Truthout spoke with Anthony DiMaggio, associate professor of political science at Lehigh University, about the infiltration of fascism into contemporary political and media landscapes in the U.S. as outlined in his new book, Rising Fascism in America: It Can Happen Here (Routledge; 2022).

Anthony DiMaggio: By losing in 2020, Trump learned from his mistakes. Trump really didn’t focus heavily on the (fictitious) voter fraud issue until after the election, meaning there was only a couple of months for him to try and mobilize his coup. Not enough pressure could be built up in that time to compel state legislators and other officials to embrace his “Big Lie.” People like Brad Raffensperger, the Georgia secretary of state, and other officials certifying the election did not feel the sort of pressure from the base that state and national partisans are now feeling to fall in line behind Trump’s propaganda. Plus, there will be many more true believers in his lie come 2024, after four years of pushing this fraud. Many of those candidates are running for office as we speak, raising the prospect that these true believers could monkey wrench the 2024 results if they do not cut toward Trump when it comes to certifying a winner.

If Trump runs in 2024, we are opening ourselves up to a world of danger. The Republican Party is setting up a paradigm where if they win, they deem the election as legitimate, and if they lose, they refuse to certify for the Democratic candidate in swing states, offering up bogus voter fraud claims. We see polls now where a third to almost half of Republicans believe violence may be needed to save the country from a corrupt system, and I don’t know how one can realistically divorce that rage from Big Lie voter fraud claims that are driving right-wing outrage today. If even a small fraction of these people is serious and take to the streets after Trump calls on them in 2024 to “fight like hell, or you won’t have a country anymore,” we will be on the precipice of a crisis. And this, coupled with swing states refusing to certify a legitimate Democratic winner in multiple states — or even the precedent of one state refusing to certify — may be enough to provoke a full-on constitutional crisis. Simply put, this is not where we want to be as a country. It’s playing with fire and could lead to the emergence of a de facto dictatorship under Trump, or to a constitutional crisis and national implosion and collapse.

So, are we witnessing the full embrace of fascism in the United States?

The Republican base understands the extremism Trump embodies, and they have supported him throughout it.

The whole “is it fascism or not” discussion is no longer helpful — quite the contrary. Discussing the U.S. as if there must be a fully consolidated fascist governing apparatus misses the main point that fascist movements and ideology are being mainstreamed, making U.S. politics more susceptible to extremism, even as the government is not today the functional equivalent of the Third Reich.

How does the rise of neofascism reconcile with Trump’s promise of “ending the era of endless wars”?

In contrast to his rhetoric, Trump continued and expanded the U.S. commitment to militarism and empire, allocating hundreds of billions to military spending, expanding the war in Afghanistan, keeping massive concentrations of U.S. troops in the Middle East, escalating a military confrontation with Iran, threatening to wipe North Korea off the map, increasing the risk of nuclear war with Russia, and demonizing China and Chinese immigrants, all while imposing a white supremacist, Islamophobic travel ban and halving immigration to the U.S. during his term.

Do Republicans overlook Trump’s racism due to growing economic anxiety in the U.S.?

The Republican base understands the extremism Trump embodies, and they have supported him throughout it. One of the most shameful lies in recent years is the effort of pundits, some academics, and others to write off support from his base as simply due to economic insecurity. There is little evidence that Trump’s supporters are more financially insecure than anyone else. His base knows his beliefs on sociocultural political issues, particularly regarding his opposition to Black Lives Matter (BLM) and immigration, and his consequent targeting of people of color. In fact, my research shows it is the main reason they support him, so downplaying this reality is dangerous and irresponsible.

What has been the role of conspiracy theories and social media in the reactionary response we’re witnessing?

Republicans now deal with conspiracy as their currency, with social media as a primary method of dissemination that pushes people to the right. For a political party which champions deregulation, it makes sense to sow distrust in government. Further, conspiracies are the venue through which Trump scapegoats ominous “others” who he can then rail against to maintain the support of his base and try to suppress his political adversaries.

The Democratic Party is a huge part of the problem via its embrace of neoliberalism, which has demobilized working-class Americans who could oppose fascism.

Trump seeks to demonize the Democratic Party and any critics or perceived opponents, including immigrants and progressive social movements such as BLM, #MeToo and anti-fascists. If you equate immigration with crime, despite the complete lack of evidence for such a simplistic connection, and then link those things to Democrats by calling them “the party of immigration” and “the party of crime,” you can construct an image of a threat from the “other,” which needs to be stomped out. This is an eliminationist program, seeking to depict the Democratic Party and people of color as an existential threat to national security.

Trump’s claims of voter fraud, directed toward cities with heavy populations of people of color, such as Philadelphia and Detroit, are another example of racialized conspiracy theory implicitly portraying people of color as an existential threat.

We indulge in these efforts and play down the risks at our own peril.

Why has rejection of so-called critical race theory (CRT) become a rallying point for Republicans?

The anti-CRT campaign is part of a movement to reestablish white supremacist politics and must be opposed with all our strength. It is a dystopian effort to police classrooms and introduce big brother-style suppression, stifling any serious pedagogical campaign to sensitize the public to the problem of structural racism. Republican state officials want gestapo-style tactics in classes, telling professors and students they are not allowed to talk about race or racism, informing teachers they will be fired if they do not suppress these discussions, and imposing a surveillance state for compliance. This does not happen in a legit democracy, but in an emerging police state.

Is the Democratic Party going to save us?

The Democratic Party is a huge part of the problem via its embrace of neoliberalism, which has demobilized working-class Americans who could oppose fascism, and because it refuses to hold Republicans and Trump accountable for their efforts to derail American elections, and for his efforts to subvert the 2020 results through stoking the events of January 6 and trying to extort a victory in Georgia. The Republicans are setting the stage for a successful coup in 2024, and Democrats are sleepwalking through the threat.

Trump showed how dangerous he is in his messaging and politics. He drew on themes trying to dehumanize immigrants of color by referring to them as “animals” and “nested infestations,” a theme repeated by his foot soldiers in right-wing media. A second Trump administration would go much further if untethered from the rule of law. Especially if he takes power through a coup and seeks to suppress opposition to it. This is an incredibly dangerous scenario. And to downplay it suggests one is part of the problem of fascism denialism, or an active collaborator with it.

What has been the role of anti-fascist groups? What else needs to be done?

We aren’t going to punch our way out of this crisis through street fights with Richard Spencer and his followers. Antifa has had an important role in sensitizing the public, or at least a solid quarter of it, to the dangers of fascism. Yet the target of street fascists has been much too narrow. We need a larger movement based in alternative and mainstream media, in addition to schools and the education system, flooding it with confirmed truths about our history of capitalist oppression and spotlighting the rising threat of right-wing extremism and fascist politics.

Yoav Litvin is an Israeli-American doctor of psychology, a writer and photographer.