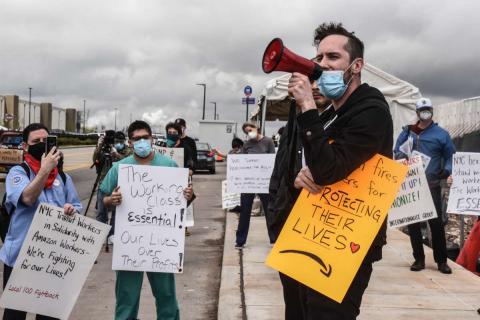 Recently, Amazon won a closely watched National Labor Relations Board (NLRB) election against the Retail Wholesale and Department Store Union (RWDSU) at a warehouse in Bessemer, Alabama. But it did so only after spending millions of dollars on harassing and intimidating its workers for two months before the vote. Now, the company is using the same strategy to bust a new independent union drive at its Staten Island facility in New York.

Unions and worker rights advocates are pushing for legislation that would protect against these types of actions. The Protecting the Right to Organize (PRO) Act, which has passed the House and is currently pending before the Senate, would limit the ability of corporate bullies like Amazon to interfere with workers’ choice to form a union.

The anti-union campaign at Bessemer provided a stark lesson on why change is desperately needed. Powerful corporations such as Amazon must no longer be allowed to bully with impunity when their employees try to improve working conditions.

When she testified before the Senate Budget Committee in March, Amazon worker Jennifer Bates described the anti-union campaign at Bessemer as a form of “stalking.” Workers couldn’t escape Amazon’s anti-union message, even when they were in the stalls of the restrooms, where the company had displayed anti-union handbills. In addition to its high-paid union avoidance law firm, Morgan Lewis, Amazon spent millions of dollars on at least three different anti-union consultant firms whose job was to dissuade the Bessemer employees from supporting the RWDSU.

Weak reporting rules for anti-union consultants mean that we will never know exactly how much Amazon spent. The PRO Act would change that and bring greater transparency.

Amazon forced Bessemer workers to attend hour-long, consultant-conducted, anti-union captive audience meetings — ominously called “education meetings” — multiple times per week; if they dared speak up, their ID badges were photographed and they were expelled from the meetings. The PRO Act would prohibit these fear-inducing forced listening sessions, which are already unlawful in most developed democracies.

Powerful corporations such as Amazon must no longer be allowed to bully with impunity when their employees try to improve working conditions.

Amazon workers were required to listen to one-on-one anti-union meetings, were exposed to anti-union posters throughout the facility and even endured human anti-union billboards walking through the facility. Bombarded with text messages attacking the RWDSU several times per day, workers couldn’t even escape Amazon’s anti-union message outside work. All of these anti-union messages — based on deliberate misinformation — came from Amazon management that has the power to hire, fire, promote, reassign and grant or deny leave. As President Biden’s remarkable video calling out Amazon’s intimidation made clear, this relentless corporate anti-union propaganda is inherently coercive.

Amazon’s anti-union campaign was nearly as pervasive on social media as it was in the workplace. Amazon posted tweets attacking RWDSU President Stuart Appelbaum and politicians who had voiced support for pro-union workers. Additionally, bot-generated tweets attacking the union were disseminated, until Twitter disabled them. Anti-union ads were also prevalent on Amazon-owned Twitch, until the gamer community revolted and insisted that they be removed.

Some Bessemer workers might have been aware that Amazon had already sacked pro-union employees in both New York and Virginia, but faced no meaningful sanction. They probably did not know that Amazon — Bessemer’s largest employer by far — had bullied the town into altering a stoplight outside the warehouse in order to stop union organizers engaging with workers as they left the facility; or that Amazon — the USPS’s largest client by far — had bullied the postal service into installing a special mailbox outside the warehouse just before postal voting began and after the NLRB had rejected Amazon’s pleas for an onsite ballot; or that Amazon had hired off-duty law enforcement agents to harass union organizers and pro-union workers and prevent them from engaging with the majority-Black workforce.

Corporate behemoths such as Amazon have virtually unlimited financial resources, and tremendous clout over the local community. The PRO Act would not change that, but it would at least limit their ability to engage in egregious anti-union bullying at the workplace.

Collective Bargaining vs. Individual “Take It or Leave It”

Amazon repeatedly told its Bessemer workers that unionization would destroy their ability to negotiate with the management on an individual basis. In reality, so-called “individual bargaining” is a fantasy for most American workers; even elite movie and sports stars have strong unions to represent them. Without a union, workers face a stark choice: accept what is being offered — such as Amazon’s decision last summer to rescind its $2 per hour hazard pay even as its pandemic profits skyrocketed, or its failure to act quickly or do enough to protect workers from the spread of COVID-19 — or get out. The PRO Act would instead promote collective bargaining, thereby giving workers real leverage over issues such as hazard pay or safety precautions for essential workers during a deadly pandemic.

At present, if Amazon’s nonunion workers feel they are being treated unfairly, they have little choice but to quit and find another job. But if the PRO Act were to pass, exit would no longer be their only option; they could stay put, form a union and have a real voice that would enable them to improve their conditions.

Amazon workers were required to listen to one-on-one anti-union meetings, were exposed to anti-union posters throughout the facility and even endured human anti-union billboards walking through the facility.

Amazon warehouses have enormously high turnover rates — double the industry average — because many workers cannot tolerate for long the brutal physical and psychological environment and they lack any meaningful voice with which to change it. They are constantly monitored by unregulated technologies, with management even recording how much “time off task” they take during visits to the restroom, resulting in some workers urinating into bottles out of a fear of being disciplined for failing to meet punishing daily production targets. The PRO Act would enable workers to have a voice and challenge these brutal working conditions.

A Mountain and a Minefield: It Shouldn’t Be This Hard to Choose a Union

American workers who try to form a union are required to run a marathon and negotiate a minefield: shenanigans by union avoidance law firms mean the union certification process takes too long, while dirty tricks by anti-union consultants means workers face too many perils along the way. The Amazon campaign demonstrated both problems clearly. Three thousand workers signed union membership cards; most of them wanted to remain secret out of an understandable fear of retaliation. After being exposed to unrelenting anti-union activities for over two months, only about a third of those card signers voted for the union. Workers were left fearful, as was the clear intention of Amazon’s anti-union campaign. One Bessemer worker, a cancer survivor, told BBC News that she was afraid that she might lose her health insurance if the union were to win the election. In short, Amazon’s brutal (and quite likely unlawful) campaign had a devastating impact on worker support for the union.

The PRO Act would limit the ability of corporate bullies such as Amazon to intimidate, mislead and bamboozle employees. It would take some of the fear out of the union organizing process and restore some measure of basic fairness to the workplace. Now that Sen. Joe Manchin of West Virginia has signed on, all but three Senate Democrats — the two senators from Arizona and Mark Warner from Virginia — are co-sponsors of the PRO Act. The legislation could attract the support of at least one Republican senator (Lisa Murkowski of Alaska), and President Biden strongly supports the legislation.

Thanks to the RWDSU’s audacious campaign at Amazon, more people than ever before understand the brutality of no-holds-barred anti-union campaigns such as the one conducted by Amazon at Bessemer. The nation is finally paying attention. The billionaires will fight to the end, but legislation for stronger labor protections is an idea whose time has come.