How Congress starved the agency that protects workers 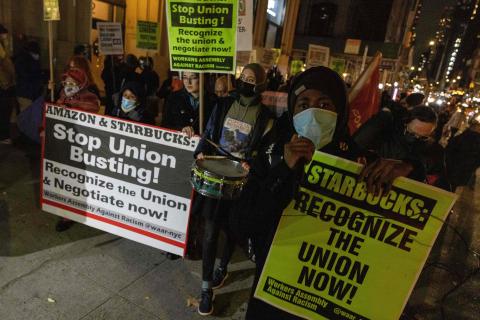 The Labor Board Is Withering Away, And That's Bad News For The Labor Movement

The Starbucks union campaign is really gaining steam. The union has organized eight stores in three states and has around 150 elections brewing all over the country. After years of falling union density, it's a glimmer of hope for the broader labor movement. So what if this campaign really caught fire — like, beyond Starbucks — and suddenly we had workers from McDonald's and Dunkin' and Applebee's all trying to unionize?

Odds are the government wouldn't be able to handle it. That's because we've starved the agency that referees collective bargaining and protects workers who try to form a union. The National Labor Relations Board hasn't seen a nominal increase in its budget since 2014. Total staffing at the agency has fallen 30% since 2010, threatening its very mission. In my piece published Friday, I explain how Congress let this happen, and why anyone who hopes to see a revitalized labor movement should be concerned about it.

The NLRB oversees union elections and investigates unfair labor practices. It was created during the New Deal expressly to encourage collective bargaining. It's right there in the law's preamble. So you won't be shocked to learn that this small agency with a budget of $274 million can be a real political football. Republicans like to turn their sights on the board when it's acting aggressively on behalf of workers and unions, and in recent years they've refused to boost funding for the agency, causing its budget to go down significantly in real dollars. The labor board's general counsel, Jennifer Abruzzo, told me the staff can barely keep up with all the Starbucks cases coming in. She views the situation as unsustainable.

So where are Democrats in all this? Don't they have both chambers of Congress and the White House? They do, but they need GOP votes to get any appropriations bill past a filibuster. And although they've put a $350 million honey pot for the labor board in their stalled Build Back Better plan, there's no knowing whether that money will ever come through. The Democrats I spoke to insisted the board's disrepair is the fault of Republicans, who seem to have drawn a red line on sending more money to this agency. After all, a poorly equipped labor board tends to benefit employers.

But Mike Bilik, an attorney at the NLRB and the legislative chair of its staff union, told me the Democrats should not get off scot-free. If they were willing to put some more of their political capital behind the agency and its mission, he said, then they could certainly shake a few bucks loose and help restore some of the staffing the board has lost. He thought for sure that would happen after the Georgia runoffs. Alas, Bilik said, "Republicans are more resolved to destroy this place than Democrats are to save it."