Letter to the Editor: 'Sabotaging the Ukrainian people' 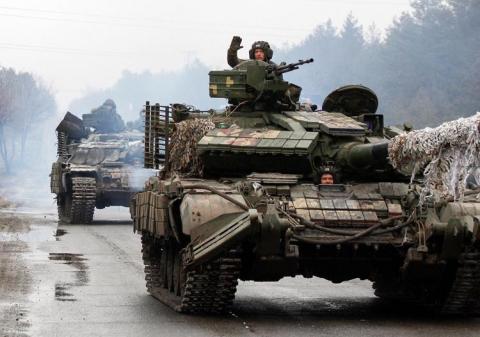 Not since the 1930s, with open Nazi sympathizing with and admiration of Hitler by some in America, have we had a similar expression of praise for a dictator, as now with Trump praising Vladimir Putin.

In response to the Russian dictator’s brazen aggression against neighboring Ukraine, Trump has gushed, “How smart is that”—“he’s gonna go in and be a peacekeeper.” “That is genius!” “Oh, that’s wonderful.” “Putin is savvy.”

On Feb. 23, Trump sounded a similar note, that “Putin is smart,” “I mean, he’s taking over a county for two dollars’ worth of sanctions. I’d say that’s pretty smart. He’s taking over a country—really a vast, vast location, a great piece of land with a lot of people, and just walking right in.”

No! Putin isn’t “walking in,” he’s in comfort at the Kremlin, and it’s Russian soldiers who are invading—and killing and dying, along with Ukrainian solders and civilians!

Tragically, with Trump’s past cozying up to this communist dictator (and the Russian oligarchs) and now emboldening him with adulation, it doesn’t take Putin being a genius to see that he has an admirer and virtual ally within the U.S. (the only nation that can adequately stand up to Russia), one who has fostered a divided U.S., weakening America from inside and creating a weakened position vis-à-vis the world—and thus less able to help hold back the lawless actions of dictators.

There surely has never before been such a set of statements by an American admiring a flagrant violation of international law and expressing a callous disregard for people of a democratic nation, ones much like ourselves, who in winter are suffering missiles and artillery destroying their homes and cities, death of civilians and defenders and the loss of their freedom. This is so hard to believe coming from an American.

Even Trump’s former White House chief of staff, General Mark Kelly, expressed shock and “disbelief” that Trump praised Putin’s invasion of Ukraine, saying that the Russian dictator is a tyrant—“he’s a murderer.” “He has attacked an innocent country whose only crime is that they want to be free and democratic.” “I can’t imagine why anyone would look at what’s happening there and see it as anything other than a criminal act.”

With his mentality, the immorality of Trump’s position clearly strikes him not. Confounding it all, in his unrelenting and reckless barrage against Biden, Trump, in duplicity mode, completely switches around from his brazen praising of Putin’s aggression—“Oh, that’s wonderful”--to saying that “this is a terrible thing that never should have happened,” because Trump, astoundingly, “thinks” the President “is sleeping.”

Both authoritarians are blatantly operating behind big lies, Putin claiming “peace keeping” in invading (after repeatedly claiming he wouldn’t) a democratic country with zero provocation or threat to Russia and Trump constantly making up election fraud. And with Trump also scheming to undermine an elected American president, he is siding with and abetting an enemy of this nation. He is a traitor to his country, the one that “allowed” him his greed to expand his wealth. For those to enable him to also expand his greed for power is to take responsibility for diminishing America.

On Thursday, the ministers of Estonia, Latvia, and Lithuania, countries once occupied by the Soviet Union, called for hard hitting sanctions against Russia, with Estonia’s ambassador to the U.S. describing the invasion as a “major catastrophe.” Surely it is, both in Europe and here, with America having entered a tragic era of facing increasing authoritarian rule and aggression on the world scene and our government being undermined from within. As Americans we must work hard on fixing the latter so we can more strongly address the former.