Fulfilling the Constitution's Promotion of the General Welfare 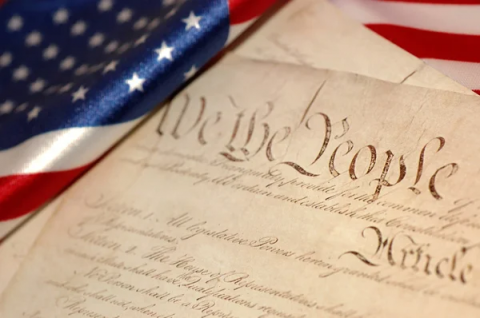 Certainly at least 99.9% of Americans do not want school children gunned down in school—or at any other location or time. Not even the most avid of gun collectors or hunters want school kids massacred by guns—or by any other means. Nor for guns to be the death of any child, anytime, for any reason. Nor does any caring person want this most powerful of nations to be unable to keep schoolchildren safe at their desks. Guns are now the leading cause of death for kids. And U.S. children are more likely to die from gun violence than in any other wealthy nation.

Certainly no caring American wants that.

And yet the slaughter—and that’s what it is, a slaughter—goes on, day after week after month after year; and, as we all know, every one of us, it’s not only in schools, but in all sorts of locations, wherever individuals and groups of people of all ages carry on their daily affairs. As the killing proceeds, we as a people descend further into sadness and frustration. We are no longer a happy people. Our children are growing up traumatized—950 (and increasing) school shootings since 2012 Sandy Hook! One Uvalde surviving schoolgirl asked, “Why did they do this to us? We’re good kids. We didn’t do anything wrong.”

Over and over again, in promoting the adoption of the proposed Constitution, Founding Fathers wrote that that governing framework would provide for the “public good,” the “common good,” the “general good,” and the “public welfare,” and, further, promote the “safety and happiness of society,” “the greatness or happiness of the people of America,” and their “peace, liberty, and safety.”*

And the Preamble, or introduction, to the adopted Constitution framed the fundamental purposes and guiding principals that the Founding Fathers hoped this Constitution would achieve, incorporating the words, “to…promote the general welfare” of the people of the United States.

Is it not incongruous to believe that this grand guiding purpose would envision and support another part of the Constitution allowing for the provision and widespread availability of weapons that are made for mass killings? That promoting “the general welfare” of us citizens requires that our society, our government, in effect, actively provide the means, the deadly means, for citizens to readily, whenever, wherever to kill fellow citizens en mass. How can that be reconciled? It can’t.

No other part of the Constitution can logically, or legitimately, or morally be used to destroy the general welfare, the public good, the safety and happiness of the people, their peace, liberty, and safety that the Founding Fathers sought for their generation and all after them.

We can no longer be truly hopeful of “life, liberty, and the pursuit of happiness” in our daily lives. The random violent death of thousands each year, the horrendous agony, pain, and the compounding grief of millions marches on—and on. There is no full safety from it for anyone. The oft worshiped Second Amendment (turned into a deadly and profane religious precept) is wrongly and totally misconstrued to deprive us of what was to be our heritage. We, and our children, are being cheated, betrayed.

An argument often put forth states that if there is adequate gun control/restrictions then only criminals will have guns. In the not-too-distant past, guns did not permeate our society, as with today, and certainly war weapons were not available. Yet, “criminals” with guns did not dominate society. On the contrary, today’s proliferation of guns has actually promoted criminality, for the ready availability of firepower encourages people who are not previously criminals to become such with that easy acquisition and use of a gun in a criminal manner. The Uvalde killer was a law-abiding citizen—until he so freely acquired a military-style weapon and horrifically used it.

To repeat, the recent mass killers legally and easily acquired highly lethal weapons as NON-criminals, and only became criminals in using those weapons. The meaningful and deadly reality is not that criminals can access guns, it’s that the legal, easy access to guns makes for (deadly) criminals. The.allowed killing that plagues our society is done by people who are not criminals—until they use a gun. Thus the threat is, to emphasize, NOT from criminals with guns, but NON-criminals with easily acquired very deadly weapons. The various arguments against sensible, moral gun controls are fallacious. (“Hardening” of schools, “arming” of teachers? What then prevents a non-criminal with legal firepower from waiting outside until schoolchildren come streaming out the door, or when a school bus is full and 30 kids are trapped inside, to be slaughtered?)

If virtually all of us want the slaughter, the pain, to stop—the many thousands of ripped apart human lives every year (have you even briefly thought about what high-powered slugs do to a child’s body??), the millions of people crushed by grief, the even greater number harboring anxiety and even fear—it can cease. It can. This desecration, this killing, is not like a tornado or some other uncontrollable force of nature, but is the actions of fellow human beings—controllable actions. Clearly it will take many approaches—with all participating, non-gun owners and gun owners, alike. As is, we are terribly foiling the noble hopes and work of the Constitutional framers. They would not comprehend what is being allowed to happen under their name.

*The 1787-88 Federalist Papers. Neither this source, nor the Constitution, nor the

Declaration of Independence speak of self defense in any terms.