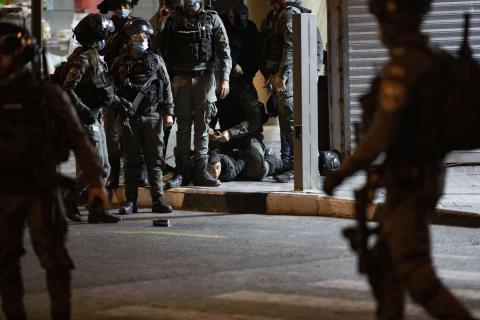 In an apparent response to growing calls for making U.S. aid to the Netanyahu government conditional on Israeli adherence to human rights law, 330 members of the U.S. House of Representatives signed a letter late last month insisting that the $3.8 billion in annual military aid the United States provides Israel remain unconditional.

The letter — which was signed by virtually all of the Republicans and over half of the Democrats — was a slap in the face to those who have argued that military aid to Israel, like all recipients of taxpayer-funded weaponry, be conditional on at least some level of compliance with human rights and international law.

The lawmakers’ overwhelming bipartisan opposition to conditioning aid is not a product of political pressures coming from their constituents. Polls show that barely one-third of U.S. voters, and barely one-tenth of Democrats, oppose such conditions. Rather, it appears to be part of a longstanding tradition going back decades of Congress rejecting the will of constituents in favor of the interests of arms exporters and the Pentagon.

Since the Biden administration is already firmly committed to continuing unconditional military aid to Israel’s right-wing government, the letter appears to be a reaction to the recent introduction of a bill by Rep. Betty McCollum (D- Minnesota) that would prohibit U.S.-provided arms and security assistance from being used in certain violations of international humanitarian law, such as the military detention and abuse of children, the demolition of homes, illegal confiscation of Palestinian property, or the annexation of occupied land.

It is also a rebuke to Amnesty International, Human Rights Watch and a wide array of other peace groups that have called for making military aid to Israel contingent on an end to ongoing flagrant violations of international humanitarian law — a condition these groups advocate for other nations as well.

The lawmakers’ letter insisted that “adding conditions” such as those would somehow “be detrimental to Israel’s ability to defend itself,” indicating a belief that such illegal activities constitute legitimate self-defense.

The message in the letter is clear: human rights and international law should not even be considered in allocating U.S. military aid.

The timing of the letter could also be a signal of support for the embattled Israeli Prime Minister Benjamin Netanyahu, who is under indictment for multiple corruption charges, as he tries to assemble a new government after inconclusive elections.

The question of unconditional aid to Israel has become a clear dividing line in the Democratic Party, as was evident during the 2020 presidential primaries.

There is a broad consensus among Middle East scholars that unconditional U.S. military, economic and diplomatic support for Israel has made that government more intransigent regarding the occupation of Palestinian territory, its ongoing human rights abuses and its belligerent policies toward Iran. Despite this, in language that can only be described as Orwellian, the letter insists that “security aid to Israel is a specific investment in the peace and prosperity of the entire Middle East” and makes the bizarre claim that it “makes the region a safer place and bolsters diplomatic efforts aimed at achieving a negotiated two-state solution, resulting in peace and prosperity for both Israelis and Palestinians.”

Since the collapse of the peace initiative led by then-Secretary of State John Kerry in 2014, there have been no significant Israeli-Palestinian talks. Most analysts have noted that it was the Israelis who were primarily responsible for their failure due to Netanyahu’s refusal to end Israeli colonization of the West Bank, withdraw from much of the occupied territory, and allow for the creation of a viable Palestinian state, even with Palestinian offers of strict enforceable security guarantees and virtually every other condition put forward by the Obama administration. Given the insistence of Obama, Trump and now Biden to keep the aid flowing regardless, Netanyahu recognizes that he can get away with his hardline position knowing there would not be any tangible pressure for him to compromise.

Some of the Democrats who signed the letter claim that while they oppose reducing the amount of aid, they do not necessarily oppose some restrictions on its use. Julie Albertson, a spokesperson for Ro Khanna (D-California), defended Khanna’s signing of the letter on the grounds that the congressman supports “robust enforcement of the Leahy Law” and other existing legislation that restricts the use of U.S. weaponry in serious human rights abuses. However, neither the Leahy Law nor any other human rights provisions has ever been applied to Israel, despite repeated calls to do so over the years, and there are no indications it will be in the foreseeable future.

Such rationalizations harken back to the 1980s when pro-Reagan Democrats defended their support for military aid to the Salvadoran government in the face of its large-scale killings of civilians with U.S.-supplied weaponry by saying they supported human rights provisions attached to such aid. However, those human rights provisions — like the Leahy amendment in the case of Israel — were never enforced.

By contrast, ending U.S. military aid for Indonesia’s occupation of East Timor in the 1990s contributed directly to that government finally allowing for a referendum on the fate of the territory and the country’s eventual independence.

The 125 Democrats who signed the letter have aligned themselves with the party’s hawkish wing against an overwhelming majority of their constituents.

Nothing short of a credible threat of substantially reducing the aid is likely to curb Israel’s ongoing violations of humanitarian law or end its occupation and colonization of Arab lands seized in the 1967 war. Without conditioning aid, there will be no peace.

The House representatives’ letter implies that any reduction in aid on human rights grounds would open Israel to attack, even portraying Israel as a passive victim of Iranian aggression without mention of Israeli attacks against Iran’s nuclear program, its shipping, and its forces in Syria. In reality, conditioning aid would not be “abandoning” Israel. If Israeli leaders believe the country’s continued violations of international humanitarian law in the occupied territories are more important than receiving U.S. assistance, that is their choice. In any case, Israel does not need U.S. aid for its defense needs. Israel is already far more powerful than any combination of possible enemies, has a substantial arms industry of its own, and is the only country in the region with a nuclear deterrent.

In an interview I did several years ago with the late Israeli Major General and former Knesset member Matti Peled, he acknowledged that U.S. aid to Israel was more about the profits of American arms manufacturers than meeting Israel’s defense needs, and that it included weaponry that had little practical purposes based on their own strategic assessments. He noted how it emboldened Israeli hardliners and ended up costing Israeli taxpayers billions of dollars in personnel, training and spare parts. The House letter, however, insists such aid is “cost-effective”

While a broad consensus of Middle East scholars recognizes there are already too many arms in the region, these House members are insisting that there somehow are not enough, arguing that U.S. taxpayers must ensure there are even more. The House members who signed the letter appear intent on fueling a regional arms race which, while quite profitable for American arms manufacturers, actually threatens peace and security in the region. Indeed, the letter praises support for “security partners” like Egypt, suffering under the oppressive military rule of General Abdul-Fattah el-Sisi.

The letter, which was addressed to the leadership of the House Appropriations Committee, was circulated by Rep. Michael McCaul (R-Texas), the ranking member of the House Foreign Affairs Committee, and Rep. Ted Deutsch (D-Florida), whom the Democrats have chosen to chair the Middle East Subcommittee of the House Foreign Affairs Committee. Both are known as staunch supporters of Netanyahu and his policies. The fact that their letter received the support of three-quarters of the House of Representatives is certainly disturbing, yet the fact that they felt a need to circulate it at all is indicative that there are unprecedented calls, at least on the Democratic side, to no longer provide Israel’s right-wing government with such a blank check.

The question of unconditional aid to Israel has become a clear dividing line in the Democratic Party, as was evident during the 2020 presidential primaries, with Bernie Sanders, Elizabeth Warren and even Pete Buttigieg recognizing the need to condition aid, a popular position summarily rejected by Joe Biden, who claimed that calls for such human rights criteria were “bizarre,” “irresponsible,” and would be like kicking France out of NATO. The 125 Democrats who signed the letter have aligned themselves with the party’s hawkish wing against an overwhelming majority of their constituents.

Unless the Democrats who signed this letter are held accountable, there will be little incentive to end U.S. military aid to Israel and other human rights abusers.

Ironically, a number of the signatories are members of the Progressive Caucus and received endorsements from progressive groups like MoveOn, Peace Action and Progressive Democrats of America. There are calls for these groups to deny them such endorsements in 2022 unless they are willing to renounce their signatures, noting how proponents of unconditional military aid to human rights abusers in Latin America and elsewhere in previous decades have been denied such support. It raises the question as to why such criteria should be lowered when the victims are Palestinians.

Indeed, unless the Democrats who signed this letter are held accountable, there will be little incentive to end U.S. military aid to Israel and other human rights abusers.