Why do the media keep saying this election was a loss for Democrats? It wasn’t 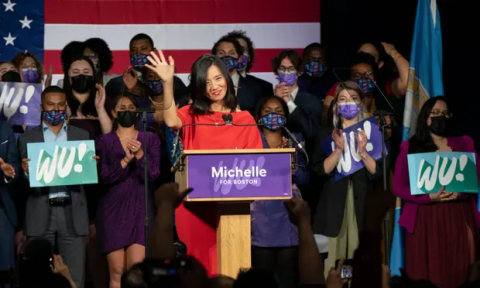 Michelle Wu speaks to supporters after winning her race for mayor of Boston, the first woman and first person of color to be elected to the office. Photograph: Keiko Hiromi/Rex/Shutterstock

Pretty much anything that happens to the Democrats is a sign that they’re weak and losing and should be worried, according to the storylines into which mainstream media tend to stuff news. Pretty much nothing, including losing, seems to signify that the Republicans are losers. In so habitually and apparently unconsciously fitting a wide array of new and varied facts into familiar old frameworks, the media shape the political landscape at least as much as they report on it.

It’s in the language. The New York Times editorial board thunders that “Democrats deny political reality at their own peril” and then insists that this election in which a moderate lost is a sign that the party needs to get more moderate. Bloomberg News found a way to make a victory sound like defeat: “Phil Murphy clung on to win a second term as New Jersey’s governor, surviving by a narrow margin.” It was about the same margin by which a Republican won the Virginia governorship, but the language around that was apocalyptic (though Virginia usually elects a governor who’s in the other party than the president, and New Jersey – which not long ago gave Republican Chris Christie two terms – re-elected its first Democratic governor in decades on Tuesday).

According to the Washington Post, which seemed to believe that Virginia was a national referendum on the party: “Democrats scramble to deflect voter anger.” The verbiage that followed was stuffed with the emotive language of a pulp novel, though it was presented as news: “An off-year electoral wipeout highlighted the fragile state of the party’s electoral majorities in the House and Senate. But a new round of bitter recriminations threatened to dash Democratic hopes of quickly moving past the stinging defeats.” Fragile, bitter, stinging. Wipeout, dash, defeat. It is true that Terry McAuliffe lost, and also true that he was a corporate centrist who, reportedly, ran a lousy campaign; it’s also true that he is not the Democratic party, and the nation didn’t vote in Virginia’s election.

As for this week’s election, it swept in a lot of progressive mayors of color. The most prominent was Michelle Wu, who won the Boston mayor’s seat as the first woman and first person of color. Elaine O’Neal will become Durham, North Carolina’s, first Black woman mayor, and Abdullah Hammoud will become Dearborn’s first Muslim and Arab American mayor. Aftab Pureval will become Cincinnati’s first Asian American mayor. Pittsburgh elected its first Black mayor, and so did Kansas City, Kansas. Cleveland’s new mayor is also Black. New York City elected its second Black Democratic mayor, and Shahana Hanif became the first Muslim woman elected to the city council (incidentally, New York City and Virginia have about the same population). In Seattle, a moderate defeated a progressive, which you could also phrase as a Black and Asian American man defeated a Latina. A lot of queer and trans people won elections, or in the case of Virginia’s Danica Roem, the first out trans person to win a seat in a state legislature, won re-election.

In Philadelphia, Larry Krasner, who in 2017 was the first of a wave of ultra-progressive district attorneys to take office across the country, swept to a second term with 69% of the vote. “I want to congratulate him. He beat my pants off,” said his Republican rival. In Cleveland, Austin, Denver and Albany, citizens voted in police-reform measures, and while a more radical measure in Minneapolis lost, it got a good share of votes. 2021 wasn’t a great election year for Democrats but it’s not hard to argue that it wasn’t a terrible one, and either way it just wasn’t a big one, with a handful of special elections for congressional seats, some state and local stuff, and only two gubernatorial elections.

It is true that the Democratic Party is large and chaotic with a wide array of political positions among its elected officials, which is what happens when you’re a coalition imperfectly representing a wide array of voters, by class, race, and position from moderate to radical on the political spectrum. It’s also true the US is a two-party system and the alternative at present is the Republican party, which is currently a venal and utterly corrupt cult bent on many kinds of destruction. It’s the party whose last leader, with the help of many Republicans still in Congress, produced a violent coup in an attempt to steal an election.

A friend who is an independent Democratic party organizer remarked to me: “Democrats are analyzed completely differently from Republicans, mainly because Democrats try to govern and to enact policies that affect the entire country. The media don’t cover the fact that Republicans don’t govern and can’t seem to report on what a party doesn’t do and doesn’t talk about.”

Looming in the background, of course, is the fact that Republicans themselves believe they are losers, because they’ve hitched their wagon to the shrinking demographic of angry white suburban and rural voters. Their efforts to suppress votes and undermine voting rights, control or replace election officials, gerrymander like crazy and overturn election results are the moves of a party that doesn’t believe Republicans can win fair elections. All this is treated as more or less ordinary and mostly not very newsworthy.

We’re only a year out from the election that won back the White House and gave Democrats control – if by the slimmest of margins – of the House and Senate. Georgia elected two Democratic senators and Arizona sent in a Democratic senator to take a seat that had been held by Republicans for more than half a century. Which was, actually, quite a lot of winning, but you wouldn’t know it from the news.

The New York Times editorial board, in one of those familiar “the party is doing it wrong” claims, declared Tuesday’s results “a sign that significant parts of the electorate are feeling leery of a sharp leftward push in the party, including on priorities like Build Back Better,” though Data for Progress reports that “With a +29-point margin, likely voters support the Build Back Better plan. The plan is very popular with both Democrats and Independents, who support the plan by respective margins of +83 and +19 percentage points.”

Eric Levitz at New York Magazine has noted that, according to polls, “only a quarter of the public thinks the Build Back Better agenda is going to help ‘people like them’”, and he links to an ABC report that also says “Democrats are failing to sell the legislation to the public, who are broadly unaware of what is in the spending packages.” Though if the public is broadly unaware of what’s in the biggest and most transformative legislation in decades, that’s a huge failure by the media as well as the party. Reporting that people don’t see what’s in it for them instead of reporting on what is in it for them might be the problem in a nutshell.

Rebecca Solnit is a Guardian US columnist. Her most recent books are Recollections of My Nonexistence and Orwell’s Roses