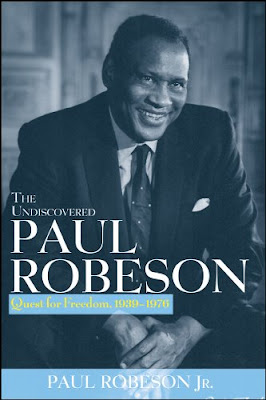 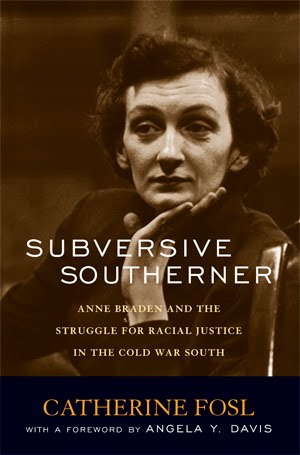 The artist must take sides. He must elect to fight for freedom or slavery. I have made my choice. I had no alternative. -- Paul Robeson, 1937.

…there are no heroes in this story…no villains…only people, the product of their environment, urged on by forces of history they often do not understand. -- Anne Braden, 1958

Subversive Southerner: Anne Braden and the Struggle for Racial Justice in the Cold War South, by Catherine Fosl (The University Press of Kentucky,August 25, 2006); Paperback, 464 pp., $26.95.

Biographies can tell us about ourselves, where we came from, and where we might go. I recently read two narratives of the lives of extraordinary people and their times. I think their lives and politics are relevant to us today.

The Undiscovered Paul Robeson: Quest for Freedom, 1939-1976, by Paul Robeson Jr., chronicles the years of struggle in the life of the theatrical performer, singer, linguist, and fighter for human freedom. Subversive Southerner: Anne Braden and the Struggle for Racial Justice in the Cold War South, by Catherine Fosl, tells the story of a militant Southern woman who rejected the political culture of her day to fight for the liberation of African Americans, always insisting that Southern whites had to play a significant role in that struggle.

Paul Robeson, born in 1898, in Princeton, New Jersey, only the third African American to attend Rutgers University, graduated with academic honors and all-American football status. He received a law degree from Columbia University but gravitated to the theater, the concert hall, film, and linguistics. As his world renown grew, Robeson became politically engaged. In 1937 he declared at a fund raiser for the brigadistas fighting the Spanish fascists that “the artist must take sides.”

Over the remaining 40 years of his life he fought alongside others at home and around the world against colonialism, racism, class exploitation, and imperialism. While he symbolized to the world the struggle for a humane socialist future for all, he became the number one target of racism and anti-communism at home.

Anne Braden, although younger than Robeson, led a parallel life of political activism. She was born in 1924 in Louisville, Kentucky, to a traditional Southern family. Schooled in the values of Southern womanhood, she increasingly saw the white supremacist south as an evil that not only repressed African Americans but served as an impediment to the achievement of human liberation for people everywhere.

She pursued a career as political organizer and journalist, publishing the invaluable periodical, The Southern Patriot. She, with her husband Carl Braden, spent years organizing against racial segregation. Her struggle repeatedly encountered racists who opportunistically used anti-communism to protect their white privilege.

The differences in the backgrounds of these two progressive giants are obvious, but the biographies referred to above illuminate fascinating parallels. First, both Robeson and Braden were raised in political cultures that were hostile to social justice. Each was raised in a supportive though sometimes stern family. The world beyond their immediate families was driven by racism. Robeson experienced it as an object. Braden experienced racism as a person being socialized to accept and endorse it.

Second, through a multiplicity of associations and experiences both came to realize that racism was not only an impediment to their own development as full human beings but was also an impediment to the development of all humanity. Consequently, at relatively young ages, Robeson and Braden came to the view that they must devote their lives to the struggle against racism.

Third, both Robeson and Braden realized in their struggles that capitalism as an economic system stood in the way of human liberation. They understood that the capitalist mode of production was built on the backs of workers. Racism, they understood, was used by capitalists to divide workers who together could organize to create a more humane society.

Fourth, Robeson and Braden accepted as a basic premise of their political work the proposition that human solidarity was a necessary if not sufficient condition for the creation of a humane society. Robeson wrote in his autobiography, Here I Stand, that underlying the world’s diverse folk music traditions there was a common musical form, a pentagonal chord structure. To Robeson this shared chord structure mirrored the fundamental oneness of humankind.

Anne Braden, saw human beings as shaped by their environments. Her own upbringing in a segregated society shaped her consciousness, but circumstances made her realize that people can liberate themselves by organizing resistance to that society. Racism has its roots in economic and political structures, and people are “urged on by forces of history they often do not understand.” But they can come to recognize and oppose those institutions that oppress others and by extension, themselves.

Fifth, both Robeson and Braden committed their lives to organizing against capitalism, imperialism, colonialism, and racism. For them this meant crossing racial lines, participating in union struggles, linking struggles for civil rights with struggles for civil liberties, and unabashedly working with the Left to bring about social change.

Robeson returned to the United States from a long sojourn in Great Britain during much of the 1930s to an America ready to embrace his music and theatrical performances. His classic radio broadcast, “Ballad for Americans,” was heard by millions of Americans.

But after World War II, Robeson turned his attention more toward fighting racism (lynchings, segregated institutions such as baseball, and white supremacy in the South), opposing colonialism, supporting the expansion of the right of workers to join unions, and promoting peace. In the context of the emerging Cold War the former celebration of his life and work turned to anger against him.

In the 1950s, the State Department pulled his passport so he could not travel overseas. He lost his audiences and livelihood as hundreds of his previously scheduled concerts were canceled. Even African American churches were reluctant to host a Robeson concert for fear of government reprisal.

After an extended public trial characterized by charges of Communist subversion Carl Braden was sentenced to prison for “sedition” based on an arcane Kentucky law. Subsequent to the trial and incarceration, virulent anti-communism dogged most organizing campaigns embraced by the Bradens.

The Southern Conference Educational Fund (SCEF), which the Bradens led, was always viewed with suspicion. Anti-communism even crept into the politics of the civil rights movement as it blossomed in the late 1950s. Despite the virulence of it, which usually was linked with racism, Anne Braden became an inspirational force among the young SNCC organizers in the South in the early 1960s, along with Ella Baker. Anne Braden took particular responsibility for building white activism around civil rights.

In the end, anti-communist campaigns, such as those against Robeson and Braden, were used as tools by racist forces to demean, delegitimize, and split the working class and youth and to defeat progressive forces. Anti-communism and the defense of white supremacy became inseparable.

How do we assess the roles of Paul Robeson and Anne Braden in historical perspective? They participated as leaders, as intellectual and moral inspirations at a time when the working class was on the move in the 1930s and 1940s, and civil rights activism spread in the 1950s. As workers mobilized to demand the right to form unions, Robeson was there. Braden committed her life to the struggle against racism and she saw Black/white unity as basic to victory.

Both participated in struggles with allies from the organized Left, particularly with members of the Communist Party USA.

Finally, and most critically, Robeson and Braden participated in and advanced a politics of the Popular Front. Popular Front politics began with a commitment to class struggle. It was based on the presumption that racism was the central barrier to social change. And Popular Front politics prioritized commitments to broad-based networking among people and groups who engaged in a whole array of peace and justice issues.

Are there lessons from these lives for us today? I believe so. Robeson and Braden taught us that the pursuit of social change was a lifetime activity. And they demonstrated to us that our political work must engage the broadest range of issues and the greatest numbers of people in our struggles for a humane future. These two biographies tell insightful and inspiring stories that everyone interested in social change should read.

[Harry Tarq is a professor in American Studies who lives in West Lafayette, Indiana. He blogs at Diary of a Heartland Radical.]