Jeff Bezos’ Fake News in the Newspaper He Really Owns 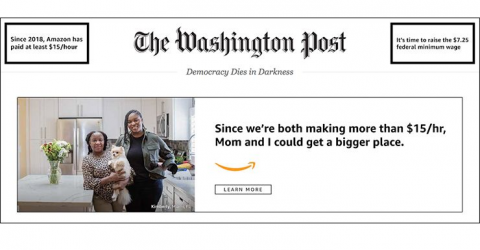 Media criticism sometimes involves reading between the lines, assessing the layered meanings of journalistic rhetoric, or considering what’s left unsaid in a given conversation. But we shouldn’t be numb to all the times media problems hit you like a sock in the jaw. 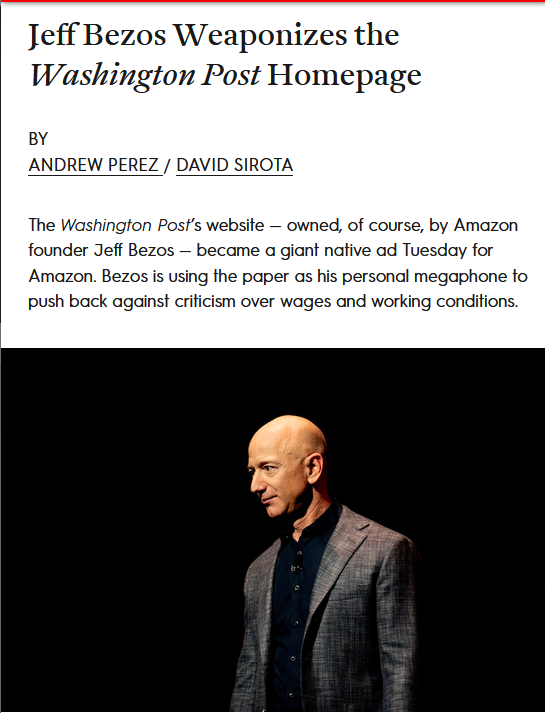 Andrew Perez and David Sirota (Jacobin, 5/27/21): “Hours after the Washington Post reported that the DC attorney general is bringing an antitrust lawsuit against Amazon, the front page of the Post’s website was festooned with native ads from Amazon portraying itself as a devoted supporter of a higher federal minimum wage.”

That was the case when readers opened the Washington Post online recently to find a full page “native” ad—that’s the kind designed to look like news—from Amazon (Jacobin, 5/27/21). Whose owner Jeff Bezos owns the Post and soon MGM (Washington Post, 5/26/21), among much else.

Blended in with the Post‘s banner and “Democracy Dies in Darkness” tagline, readers got text about how Amazon supports a raise in the federal minimum wage and has been paying its workers $15 an hour since 2018. A big picture showed an African-American employee and her child talking about how Amazon‘s generosity is allowing them to move to a bigger home.

Never mind that, as many could tell you, the company was dragged kicking and screaming to that wage increase (Jacobin, 10/2/18); that they continue to fund groups that strenuously oppose a $15 minimum wage (Jacobin, 5/27/21), like the US Chamber of Commerce; that they have vigorously and vehemently opposed union organizing (New York Times, 3/16/21)—and that no wage can justify the dangerous and degrading conditions Amazon is reported to subject many of its workers to (Intercept, 3/25/21).

Just as it was selling Post readers on the notion that it’s lifting folks to a better life, Amazon was being cited by OSHA for a rate of serious workplace injuries nearly double that at other employers (CNBC, 6/1/21). A front-page, “truthy-looking” ad about corporate benevolence is surely designed to deflect from such troubling realities.

It didn’t prevent the paper (6/1/21) from reporting on the OSHA findings, though that story contained another kind of weirdness we’ve come to take for granted: a summary statement that “Amazon declined to make any executives available for interviews on its workplace injury data.”