How Do You Spell Despicable? 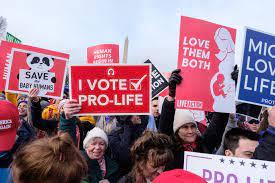 One of the most telling accusations against self-proclaimed “pro life” activists is that they aren’t really pro life, they are pro birth. If they were really concerned about protecting life, they would support feeding hungry children, and oppose everything from dangerous pollution to gun violence to the death penalty. Instead, their concerns magically vanish once the fetus emerges from the womb.

A report from the Guardian underscores that observation.

At least 10 US states have siphoned millions of dollars from federal block grants, meant to provide aid to their neediest families, to pay for the operations of ideological anti-abortion clinics.

These overwhelmingly Republican-led states used money from the federal Temporary Assistance for Needy Families program (Tanf), better known as welfare or direct cash aid, to fund the activities of anti-abortion clinics associated with the evangelical right. The clinics work to dissuade women from obtaining abortions.

In all cases, the states used these funds even as Covid-19 caused the worst economic upheaval in nearly a century, left one in four families without enough to eat, and resulted in mass layoffs that had a disproportionate effect on low-income and racial minority Americans.

Despicable is too nice a word.

These 10 states funneled the money through “Alternatives to Abortion” programs, part of state budgets established by conservative legislatures and often run through state health departments. They not only send millions in federal welfare funds, but also state taxpayer dollars to such centers.

The article details other measures imposed by the states that effectively prevent TANF and other social welfare funds from reaching their intended beneficiaries. A number of those measures are demonstrably racist, but they all begin with the assumption that poverty is evidence of moral failure; the resulting legislation is thus punitive, rather than ameliorative.

Back in 2017, I reported on a survey that found religion to be a significant predictor of how Americans perceive poverty. Christians, especially white evangelical Christians, are much more likely than non-Christians to view poverty as the result of individual moral deficit.

The article cites Missouri as an example of the results of that view:

“We’ve created a new class of Missourians,” Glenn Koenen, a hunger adviser with the left-leaning group Empower Missouri, said at the time the reforms were passed. “We now have legislated that some of our neighbors are too poor to get help from anti-poverty programs.”

Missouri then spent funds not paid to families on other programs, among them the Alternatives to Abortion program. Since 2017, it has sent $26m to anti-abortion clinics, according to state budgets. The average monthly benefit for a Missouri family is $256.

Evidently, the Missouri legislature was perfectly okay with punishing 28,643 children for their parents’ perceived moral deficiencies.

The article proceeds to document the medically-inaccurate “facts” and outright lies routinely told by these “Crisis pregnancy” centers to the women who visit them, and it reports on the religious indoctrination to which they must submit in order to get the minimal help–diapers and milk, for instance–that the centers offer. It also points out that nationally there are far more such centers than there are abortion providers– more than 2,500 ideologically focused, anti-abortion clinics, compared with just 800 abortion providers.

There are a lot of adjectives we might use to describe a refusal to feed and clothe living children in order to force women to give birth. Pro-life is definitely not one of them.