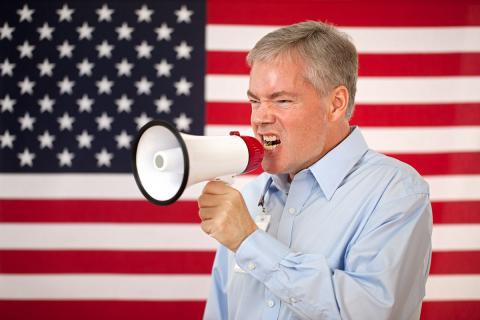 All those angry, screaming tirades by a rightwing minority disrupting local school board meetings throughout the state and nation threatening recalls and mayhem against board members aren’t really about education at all.

They’re part of a much bigger organized assault on American democracy and free and fair elections funded by Milwaukee’s notorious Bradley Foundation and some of Wisconsin’s best-known billionaire Republican political donors.

We all know by now where the violent, rightwing politics of rage can lead. The violent insurrection on Jan. 6 was the end result of a national campaign of hatred and intolerance inflamed by the angry, divisive rhetoric of the ousted former president.

What Atty. Gen. Merrick Garland has described as a “disturbing spike in harassment, intimidation and threats of violence” against educators are focused on two issues vehemently opposed by the former president—school mask mandates and teaching about America’s racial history.

For many Americans, there’s nothing controversial about either of those issues. Parents who oppose providing safe schools for their children are clearly a minority. Until vaccines are approved for children under 12, parents have good reason to worry including those families filing lawsuits in Waukesha and Fall Creek whose children contracted COVID-19 after their schools ended mask mandates.

Polls also show a majority of Americans realize racism is a continuing problem resulting in unequal treatment under the law and wide disparities based on race. Those who don’t believe it insist they don’t have a racist bone in their bodies, but their minds are something else.

A particularly disruptive national organization surfacing in Kenosha is called Moms for Liberty. The Moms have 135 chapters in 35 states hellbent on protecting children from education. A Tennessee chapter denounced as obscene a textbook photo of two sea horses they thought could be mating. Moms in Florida objected to fourth graders being taught how to spell “spinal tap,” “isolation” and “quarantine” because they were “too scary of words.”

Parents Defending Education, Fight for Schools and No Left Turn are all national organizations with rightwing political funding pretending to be grassroots local groups. In Wisconsin, much of the national rightwing funding is local.

The Bradley Foundation has funded extreme rightwing political causes for decades. The foundation is often joined by billionaire Republican donors Diane Hendricks and Richard and Elizabeth Uihlein, sponsors of the far-right political careers of Scott Walker and Ron Johnson.

The Bradley Foundation was identified recently as a major contributor of “The Big Money Behind the Big Lie,” the recent New Yorker investigation by Jane Mayer. She called the Bradley Foundation “an extraordinary force in persuading mainstream Republicans to support radical changes in election rules.”

Mayer said Bradley passed out millions of dollars in grants throughout the country to try to reverse President Biden’s election defeat of Donald Trump by disqualifying legitimate voters, giving Republicans the ability to manipulate election outcomes and undermining faith in democracy.

Mayer wrote: “It might seem improbable that a low-profile family foundation in Wisconsin has assumed a central role in the current struggles over American democracy. But the modern conservative movement has depended on leveraging the fortunes of wealthy reactionaries.”

Many of us are amused every few years when east coast media rediscover everything the Bradley Foundation has been up to out here in the Midwest to destroy democracy not only in Wisconsin, but the nation. Many still do not realize the Bradley Foundation funded the racist academic research of Charles Murray, co-author of The Bell Curve, the infamous 1994 study claiming to prove African Americans were genetically inferior to whites because they consistently scored 15 points lower than whites on I.Q. tests created by white people.

In 2016, the Bradley Foundation celebrated Trump’s openly racist election campaign solidifying the Republican bond with white supremacists by giving Murray a lifetime achievement award and $250,000 recognizing him as one of the distinguished conservatives “we feel have made outstanding contributions consistent with our mission.”

Speaking of contributions from Wisconsin to subvert democracy, right on cue Sen. Ron Johnson has denounced Atty. Gen. Garland for responding to the threats of violence against educators and school boards. “Those who dedicate their time and energy to ensuring our children receive a proper education in a safe environment deserve to be able to do their work without fear for their safety,” Garland said.

Johnson is outraged. “(Garland) is saying (parents) are intimidating school board members,” he said. “No, it is the attorney general of the United States that is intimidating people exercising their rights to free speech and the right to petition their government.”

But then Johnson also thought hundreds of violent Trump supporters storming the U.S. Capitol threatening to murder members of Congress and hang Mike Pence to stop them from certifying President Biden’s election also were peaceful demonstrators exercising free speech and petitioning their government.

Joel McNally is a national-award-winning newspaper columnist and a longtime political commentator on Milwaukee radio and television. Since 1997, Joel has written a column for the Shepherd Express where he also was editor for two years