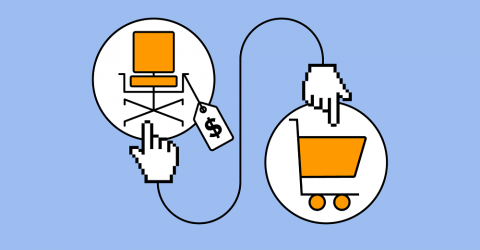 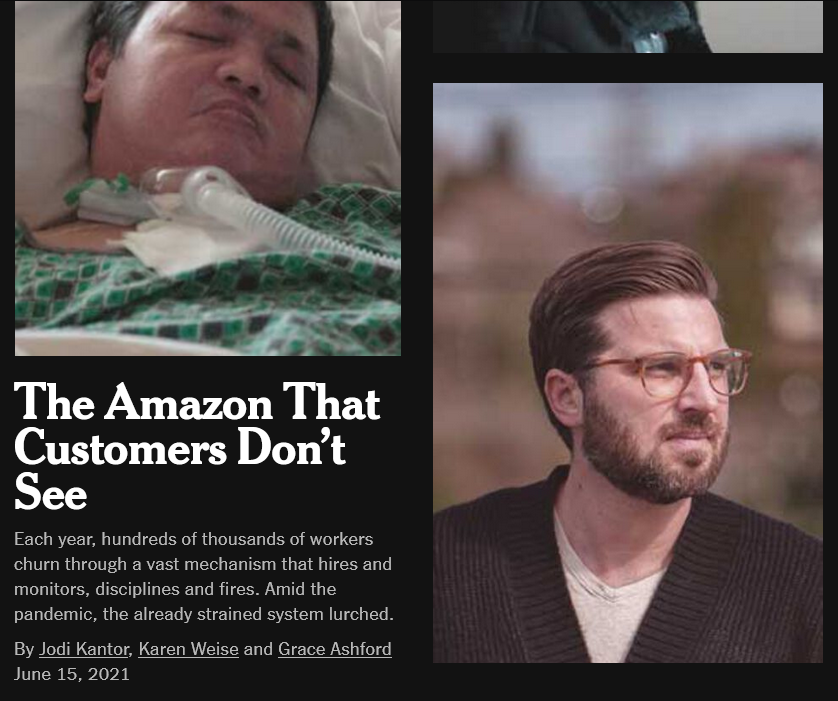 The New York Times (6/15/21) examines the sinister side of one of its major business partners.

Amid the pandemic, Amazon’s system burned through workers, resulted in inadvertent firings and stalled benefits, and impeded communication, casting a shadow over a business success story for the ages.

One former Amazon human resources VP interviewed gave some context for the company’s sky-high 150% yearly turnover rate, saying CEO Jeff Bezos “didn’t want hourly workers to stick around for long, viewing ‘a large, disgruntled’ work force as a threat.” In other words, high turnover is a feature, not a bug, of this “success story for the ages.”

It’s the kind of reporting that might make Times readers rethink their Prime membership. Except, if they click over to another section of the Times‘ website, they’ll find a prominent blue banner that follows them as they scroll, announcing that “Prime Day starts June 21.” It’s not an Amazon ad—it’s a message from the Times, encouraging readers to sign up for alerts telling them the best ways to spend their money on Amazon‘s biggest marketing day of the year. 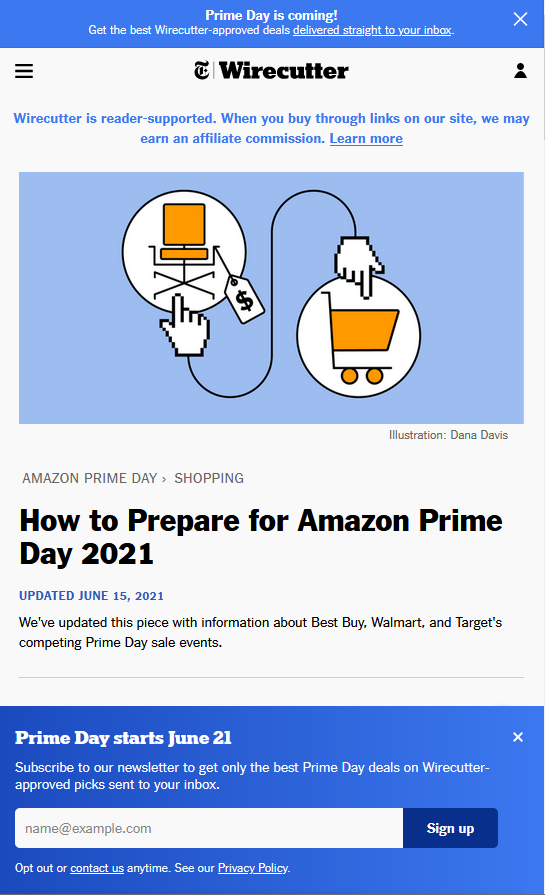 Alerting readers about Amazon‘s sales events appears to be a prime mission for the New York Times and Wirecutter (6/15/21).

That section is Wirecutter, a product review site that the Times acquired for some $30 million in 2016 (Recode, 10/24/16). It’s a digital section of the paper, though its content frequently appears in the print edition. For instance, the most recent Sunday paper (6/13/21) ran a Wirecutter article on page 3—”Here to Help; How to Prepare for Amazon Prime Day”—that gave readers tips on how best to give Amazon their money.

“It’s the merging of content and commerce,” a retail strategist told the LA Times (10/24/16) at the time of the acquisition. “Respected publications and websites have real potential power as sales-drivers because they have readers who trust them.”

The Times would have you believe there’s nothing untoward about this arrangement. “We work with total editorial independence,” Wirecutter‘s About Us page professes, and claims that “of course, our writers and editors are never made aware of or influenced by which companies have affiliate relationships with our business team.” But anyone who spends any time on Wirecutter knows that an overwhelming number of affiliate links point to Amazon; surely its own staff are not oblivious to this.

That’s not to say Wirecutter intentionally gives Amazon preference. As the outlet (5/10/21) explains, “Revenue isn’t part of our team’s deal-assessment rubric at all—the best price from a reliable retailer is what we aim to post every time.” But Amazon has essentially rigged the system so that it will almost always have that “best price.”

As the Times‘ own Karen Weise (12/19/19) pointed out more than a year ago, Amazon initially lured businesses into its shopping ecosystem with relatively relaxed rules and its big customer base, but as its online dominance has grown, so have its rules. The company started pushing its own warehouses, requiring sellers to use Amazon‘s fulfillment services if they wanted access to the coveted Prime members (who spend much more money on Amazon). And, crucially, it punishes sellers who list their product elsewhere at a lower price than at Amazon.

That means if something’s available on Amazon among other places—and it usually is, since the website sells more than 350 million products—it’s almost certain to have the best price.

As Matt Stoller (Big, 5/30/21) points out, since Amazon takes a big cut of third-party sellers’ earnings, and requires them to offer “free shipping” to Prime members, those retailers are forced to raise their Amazon prices to come out in the black—and since they can’t list their prices any lower elsewhere or they’ll be essentially cut off by Amazon, consumers pay inflated prices, whether they buy from Amazon or not. This is at the heart of the recent antitrust suit filed against the online giant (Wired, 5/25/21).

The lure of affiliate links 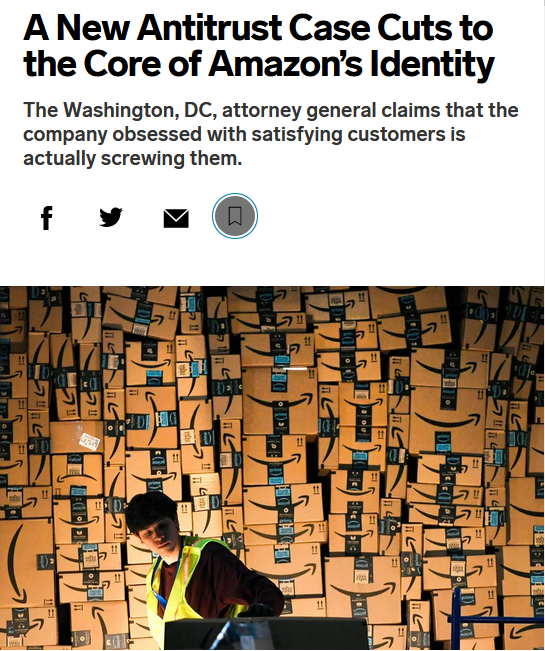 While an anti-trust suit alleging that Amazon artificially boosts prices undercuts its pro-consumer branding (Wired, 5/25/21), features that present Amazon over and over as having the “best price” serve to bolster it.

The distorting influence of advertising on corporate media has long been obvious (which is why FAIR has always rejected an advertiser-funded model for our own work). Advertiser-funded news that regularly criticizes major advertisers, or the capitalist system in general, is at risk of losing its funding sources.

Much less attention has been paid to affiliate links. But if you try to estimate the amount of money the Times gets from Amazon every month through its Wirecutter links, it’s almost certainly on par with or more than any other individual advertiser in the paper. In its annual earnings report, the paper showed about $400 million in 2020 advertising revenue. The year the Times acquired Wirecutter, the startup’s annual profit was estimated to be around $10 million, and two years later the paper had claimed 50% year-over-year revenue growth for the unit. It apparently makes up the most profitable portion of the company’s “other revenue” category, which netted just under $200 million last year.

But affiliate link revenue is different from advertising revenue in one important sense. If people see an ad in the Times for a car and they don’t buy that car, it makes no difference to the Times’ bottom line. Car companies can’t track which ad placements drive individual sales; an ad in the Times is more about building or sustaining a brand’s reputation than it is about direct translation to sales.

But if people see an affiliate link to Amazon on Wirecutter and don’t click through to buy the product, that directly hurts the Times’ bottom line. And any dings to Amazon’s reputation could impact that as well. So in that sense, it’s an even more dependent and conflicted relationship.

Would the Times‘ coverage of Amazon—which, as we’ve pointed out, is occasionally quite good—be tougher and more frequent if a less significant portion of its revenue didn’t come straight from the retail behemoth? It’s impossible to say—and that’s a problem. But perhaps more importantly, anodyne Wirecutter articles that instruct Times readers how best to shop at Amazon serve to blunt any impact from critical coverage from reporters like Weise. Indeed, it’s hard to hold the powerful to account while simultaneously pushing customers their way.