Another record year for press-freedom violations in the US 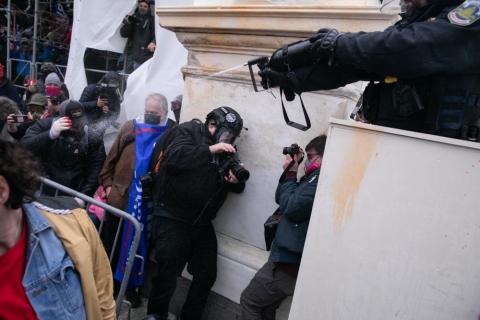 Photojournalist John Harrington was assaulted, including being hit in the head with a fire extinguisher, while covering the Capitol riots on Jan. 6, 2021. The U.S. Press Freedom Tracker documented at least 16 journalists assaulted that day.

Just six days into January 2021, journalists documenting the Capitol riots were assaulted and tens of thousands of dollars of media equipment damaged. In April, a journalist went on trial after her arrest while reporting from a Black Lives Matter protest the year before. By the time the year closed, one of the most venerated news institutions was under a publishing gag-order.

While we did not see the scope of national social-justice protests of 2020—a year in which journalists were arrested or assaulted on average more than once a day—2021 still outpaced the years before it for press-freedom violations. We systematically capture this data in the US Press Freedom Tracker, where Freedom of the Press Foundation, in partnership with the Committee to Protect Journalists and other press freedom groups, has documented aggressions against journalists in the United States since 2017.

It’s tempting to compare 2021 against 2020—when assaults and arrests of journalists hit an all-time high—and conclude, because fewer journalists were arrested and fewer were hit with crowd-control munitions, that the state of press freedom in the US can be ignored. That conclusion would be wrong.

In fact, if you remove 2020 from the equation, the amount of press-freedom violations documented in 2021 outpaces the years before it across several categories:

In 2021, we documented 142 assaults of journalists. For the second consecutive year, the majority of those assaults came during protests: 95 percent in 2020 and 77 percent in 2021.

The year began with a protest that became a riot, as the US Capitol was stormed by a mob attempting to stop certification of election results. The Tracker documented at least 16 journalists assaulted in Washington, DC, while covering those events, many of whom were targeted.

For the second year in a row, the response to federal and local mandates around COVID-19 also factored into physical attacks of journalists. From anti-lockdown to anti-vaccine protests, coronavirus-related assaults increased from four (and much harassment) in 2020 to 14 in 2021.

Read: For visual journalists, harassment now comes from all sides

In 2020, an unprecedented 142 arrests and detainments of journalists occurred, a nearly 1500-percent increase over the nine documented in 2019. In 2021, that number was 59, with nearly half arrested or detained in kettles, a tactic used to hem in large crowds, often before mass arrests.

The last arrests of the calendar year came on Christmas Day, when two Asheville Blade reporters were arrested while covering the eviction of a homeless encampment in North Carolina. Both face charges of trespassing, with hearings scheduled for March, and one of the reporters, Matilda Bliss, had her phone confiscated during her arrest.

Read: More than 50 journalists arrested or detained while on the job in the U.S in 2021

Subpoenas, the Espionage Act and a Prior Restraint

For the first time in five years of documentation, the number of publicly-known subpoenas or other legal orders has decreased rather than increased. Of course, it’s not unusual to find out about subpoenas much after the fact: In 2021, we published details about just more than 50 subpoenas requesting reporting material or journalistic testimony. Fewer than half of those were for subpoenas issued in 2021.

For example, the US Department of Justice informed The New York Times on June 2, 2021, that the agency secretly obtained phone records of four of the newspaper’s reporters more than a year before, during the Trump administration in 2020.

That administration also attempted to obtain the four reporters’ email records in January 2021, an effort that continued for a time under the Biden administration. On June 5, the DOJ announced that it would no longer seize journalists’ records during leak investigations.

In December, freelance journalist Amy Harris sued the US House Select Committee to Investigate the January 6th Attack on the United States Capitol after it subpoenaed telecom operator Verizon for her phone records. Of the more than 20 subpoenas captured in 2021, Harris’ is among the eight still pending.

The Trump administration, together with the CIA, also reportedly plotted to kidnap—and possibly even assassinate—WikiLeaks founder Julian Assange, who has been held in a London jail since 2019, Yahoo! News reported in September. In October, more than two-dozen major civil liberties and human rights groups groups, including FPF, sent a letter to Attorney General Merrick Garland demanding that the DOJ drop its prosecution of Assange, underscoring “that the criminal case against him poses a grave threat to press freedom both in the United States and abroad.” To date, Biden’s DOJ has continued the Trump administration’s case against Assange, and in December, an appeals court in the United Kingdom said it would allow the US to proceed in extraditing him.

And while we only documented one prior restraint for all of 2021, even one is noteworthy. On November 11, a New York state court ordered the New York Times not to publish information around the group Project Veritas, the first prior restraint for the newspaper since the Pentagon Papers case 50 years ago. That prior restraint, which was struck down by the Supreme Court in a landmark decision in 1971, only lasted 15 days. As of this writing, this latest prior restraint remains in place, confounding press-freedom groups.

Kirstin McCudden is the vice president of editorial for Freedom of the Press Foundation and managing editor of the US Press Freedom Tracker. She writes the Tracker’s monthly newsletter, which first published much of this analysis. Subscribe to it here.