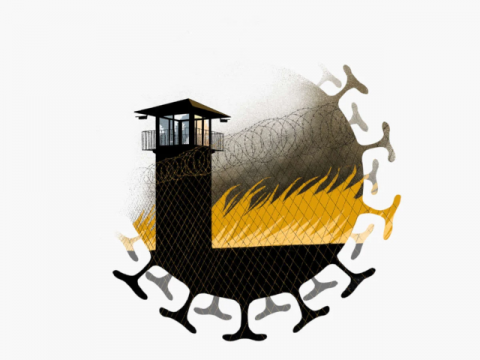 U.S jails and prisons, already death traps, have been completely ravaged by COVID-19. Crowded quarters, a lack of PPE, inadequate medical care, an aging population, and unsanitary conditions have contributed to an infection rate 5.5 times higher than the already ballooned average in the U.S. As of this writing, over 252,000 people in jails and prisons have been infected and at least 1,450 incarcerated people and officers have died from the novel coronavirus. Evidence suggests these figures are underreported, however. (The entire state of Wisconsin, for example, isn’t releasing any information to the public.)

In response, incarcerated people have shown strong solidarity, coming together to demand baseline safety measures and advocating for their release, only to be met with brutal repression and punishment.

According to a new report released by the archival group Perilous: A Chronicle of Prisoner Unrest on November 13, incarcerated people in the U.S. collectively organized at least 106 COVID-19 related rebellions from March 17 to June 15. Perilous, a volunteer collective project that tracks information on all prison uprisings, riots, protests, strikes and other unrest within carceral facilities, described this activity as “clearly one of the most massive waves of prisoner resistance in the past decade.”

Duncan Tarr, a researcher at Perilous, tells Truthout, “Since corrections departments and ICE contractors are unwilling to prevent the spread of the virus, prisoners and detainees have been taking action themselves to draw attention to the dangerous situation they find themselves in and to resist the system of incarceration that is killing them.”

Perilous’s analysis found that people rose up inside federal and state prisons, jails, juvenile carceral centers, and Immigration Detention Centers in 39 states. Immigrant Detention Centers rebelled most frequently, with 45 separate events. Thirty-tworebellions took place in private prisons (25 of which had contracts with Immigration and Customs Enforcement), a disproportionate response as less than 9 percent of prisons in the United States are privately operated. Louisiana, with a rich history of work stoppages, rebellions and an indefatigable support infrastructure, was the state with the highest frequency of COVID-19-related prison rebellions. California and Washingtonwere the second and third most rebellious respectively.

Common demands have included that guards wear masks and that departments provide individuals with protective items like soap, masks, and hand sanitizer.

Over 252,000 people in jails and prisons have been infected and at least 1,450 incarcerated people and officers have died from the novel coronavirus.

In early April, an estimated 120 to 180 detainees inside GEO Group’s Adelanto ICE “Processing Center” in California went on hunger strike after two individuals exhibiting COVID-19 symptoms were sent to the hospital. Striker Marcos Duran told Perilous that the private prison’s guards weren’t wearing masks. Detainees did not have access tosoap or shampoo, were forced to eat alongside 50-60 other detainees, and slept in the same room as seven others, Duran said. As of October 7, according to Desert Sun, nearly 20 percent of detainees at Adelanto had contracted COVID-19.

Beyond hunger strikes, Perilous documented 21 “uprisings” in American prisons, defined as collective acts of rebellion that exceed the usual scope of a protest through unpredictable or chaotic means.

In Monroe, Washington, after six incarcerated people and five staff members were diagnosed with COVID-19, an estimated 100 to 200 incarcerated people staged a protest over inadequate protective measures and a downplaying of the virus in the recreation yard at Monroe Correctional Complex on April 8. Joshua Vermaat, an incarcerated person at MCC, described his concerns in a letter to a friend, excerpts of which were published in KUOW, NPR. He said the Department of Corrections was transferring uninfected incarcerated people into contaminated tiers. He wrote, “We’ve been safe until now, but because of their lack of foresight and proper planning, now they need rooms for more vulnerable inmates and they want us to go into the ‘hot zone’ to make room for them.”

Incarcerated people in the U.S. collectively organized at least 106 COVID-19 related rebellions from March 17 to June 15.

“They tried to bribe us with McDonald’s food. Are you flipping kidding … if you would do anything I ask you to tell this to the news and to the governor, this isn’t right.”

Some people refused orders to move. Their grievances were met with chemical weapons, rubber bullets and sting balls, according to the Department of Corrections. Demonstrators were ultimately forced to surrender.

The next day Vermaat said the resistance led to a change in tone from the DOC, but that the facility went on lock down. “No one here wants violence, NO ONE, but at the same time you’ve got 400+ … who are now being backed into corners.”

One month later, a guard at Monroe Correctional died from COVID-19.

Cook County Jail in Chicago, a site with the largest outbreak of any location in the state of Illinois, rebelled on six separate occasions including one uprising and several hunger strikes. On at least one occasion some detainees attempted or threatened to attempt suicide.

Over the course of April, the jail had released nearly a fourth of its population, decreasing it from 5,604 to 4,301. But, despite early resistance, Cook County Jail’s population has crept up again to nearly pre-pandemic levels.

COVID-19 flareups behind bars have undoubtedly contributed to the United States’ abysmal failure to control the virus. Despite urgent calls for action from public health scientists in The Lancet, the ACLU and countless other organizations, Democratic and Republican politicians alike, from New York Gov. Andrew Cuomo to Alabama Gov. Kay Ivey, have largely refused to reduce prison populations by any meaningful margin. In the ACLU’s evaluation of state efforts to prevent COVID-19 deaths behind bars, Colorado, Kentucky, Maine, Michigan, Minnesota, Oregon, Tennessee, Vermont and West Virginia received the best scores, all with a “D-”. After sustained activism and a mounting death toll, on November 4, New Jersey released more than 2,000 incarcerated people who were already nearing the end of their sentences.

In the face of negligence, Ivan Von Staich, an incarcerated person at the notoriously brutal San Quentin State Prison, filed a lawsuit in May against the California Department of Corrections and Rehabilitation alleging “deliberate indifference to the risk of substantial harm to inmates by failing to immediately reduce the prison population of San Quentin by releasing or transferring at least 50 percent of the population of the prison.” After the filing, San Quentin suffered an outbreak of at least 2,500 cases and at least 29 deaths. On October 20, the First District Court of Appeal in California ruled in Von Staich’s favor, ordering the release or transfer of nearly 1,500 incarcerated people. The court wrote, “If necessary to achieve this reduction, respondents are ordered to revise their expedited release programs to include inmates over 60, who have served at least 25 years of their sentences and are eligible for parole, such as life prisoners eligible for parole and second or third strike prisoners, even if such prisoners are serving a sentence for a violent offense.”

Incarcerated people and public health experts warn, however, that transfers increase the spread of COVID-19. San Quentin’s massive outbreak resulted from transfers. “The best way to help keep prisoners from contracting the virus would be mass releases,” Christopher Blackwell, an incarcerated man at Monroe previously told Truthout. “Absent those, it is essential to cease transfers and provide incarcerated people with adequate supplies.”

Instead of mass releases, as the U.S. enters its third wave, many departments’ chosen preventative measures continue to be “lockdowns,” or confining people in their cells for 21 to 23 hours a day. It’s estimated that 300,000 people incarcerated in state and federal prisons are in lockdown or solitary confinement conditions. Many incarcerated people have lost phone privileges and (already scant) programming. As budgets are slashed without complementary mass releases, healthcare services behind bars will continue to deteriorate, according to Perilous’ report.

Prior to COVID-19, experts considered U.S. prisons to be ‘ticking time bombs.’ Baseline volatile conditions remain and the virus is an accelerant. There is some hope that the virus will be better managed once Biden and Harris take power, although they have not yet released a plan that puts people over profit.

Tarr hopes that the Perilous report will bring some attention to the struggle behind bars during this chaotic time. “As the national political crisis continues to play out over the next few months, it is important that some of the most vulnerable to COVID-19 — those locked up by our government — are not forgotten and that their cries for help and freedom do not go unheard,” he said. “And a close look at the first few months of their resistance to the pandemic can shed some light on how we might move forward in preventing more unneeded deaths inside prison walls.”

Ella Fassler is an independent writer and researcher based in Rhode Island. Her work has been featured in The Nation and The Appeal. Follow her on Twitter: @EllaFassler.