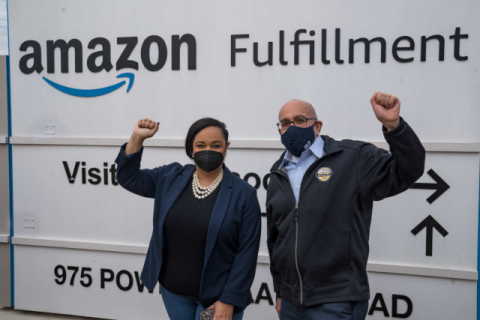 Martin Levitt — who renounced his 20-year career as an anti-union consultant to write a landmark memoir, Confessions of a Union Buster, in the early 1990s — famously said that union busting is a “dirty business” which is “populated by bullies and built on deceit. A campaign against a union is an assault on individuals and a war on the truth. The only way to bust a union is to lie, distort, manipulate, threaten, and always attack.” Amazon’s ongoing anti-union campaign in Bessemer, Alabama, where 5,800 workers are voting by mail on whether or not to join the Retail, Wholesale and Department Store (RWDSU) union, provides a stark illustration of Levitt’s statement.

After hiring one of the country’s largest and most expensive union-avoidance law firms, Morgan Lewis, Amazon is now paying almost $10,000 per day plus expenses to three anti-union consultants: Russell Brown, Rebecca Smith and Bill Monroe. Among other campaigns, Brown and Smith have previously run controversial, high-profile anti-union drives at Mission Hospital in Asheville, North Carolina, in 2020, at which nurses preparing for the COVID-19 pandemic were subjected to a “relentless” anti-union campaign; and in 2017, at Kumho Tires in Macon, Georgia, where the National Labor Relations Board found that the company committed “numerous and egregious” unlawful anti-union actions. When Amazon’s anti-union campaign is over, the e-commerce behemoth will almost certainly have paid millions of dollars to its union avoidance consultants and law firm in order to prevent its Alabama-based employees from choosing a union.

The PRO Act Would Rein in Anti-Union Consultants

The relentless, consultant-driven, anti-union campaign at Amazon provides a compelling case demonstrating the need for the Protecting the Right to Organize (PRO) Act, the labor movement’s main legislative priority for the Biden administration, which was passed by the House of Representatives in February 2020. The PRO Act would almost certainly pass again in the House and President Biden supports it, but in common with most previous efforts to strengthen the nation’s labor laws, it remains a longshot in the Senate. Several provisions of the PRO Act would restrict corporations’ ability to conduct no-holds-barred anti-union campaigns: It would prohibit mandatory “captive audience” anti-union meetings; it would limit employers’ ability to delay the union certification process (and thus extend the anti-union campaign); and it would require that employers and consultants report their financial arrangement to the Department of Labor, even if the consultants avoid face-to-face contact with employees.

Adopting a standard anti-union talking point, Brown begins by complaining that, by limiting the role of anti-union consultants like himself, the PRO Act would “make it more difficult for workers to make an informed decision regarding unionization.” He blames unions seeking to “demonize consultants” by calling them “union busters” and making it “sound like companies are denying employees free will by having meetings to educate employees on union representation, referring to them as ‘captive audience meetings.’” Brown complains that under the PRO Act’s prohibition of captive meetings, “consultants educating employees will be unlawful.” In response to the question of what anti-union consultants tell employees, Brown says, “the answer is a lot.”

Brown has written against state-level bills in Connecticut and Oregon that sought to prohibit captive audience anti-union meetings, calling them “an end run to squelch employers from educating their employees on what it means to be in a union and how collective bargaining really works.” In reality, captive audience meetings and similar “forced listening sessions” are outlawed in most developed democracies and have repeatedly been criticized by leading human rights organizations, including Human Rights Watch.

Brown says that a “typical curriculum” during an anti-union campaign includes captive meetings on the topics below, remarkably similar to the playbook he is using at Amazon, and which is documented on Amazon’s slick anti-union website, DoItWithoutDues.com. Several press reports cite Brown and Smith stressing similar themes in captive audience meetings — so-called worker “education sessions” — during the anti-union campaign at Bessemer.

Brown’s first meetings are with frontline managers and supervisors because, he claims, U.S. labor law “greatly restricts” what employers can say or do. For decades, consultants have used supervisors and frontline managers to spearhead their anti-union campaigns. Brown complains that managers are not allowed to say that the business “may have to shut down” if the union comes in. In reality, the National Labor Relations Act provides employers much greater freedom to oppose unions than does labor law in almost any other advanced democracy.

Second, Brown meets with bargaining unit employees and discusses “strikes and the difficult procedures required to decertify a union.” Consultant anti-union campaigns always highlight strikes — which are increasingly rare in the U.S. in recent decades, with just seven major work stoppages in 2020 — and the alleged difficulty of getting rid of an unwanted union, even though survey evidence indicates that the overwhelming majority of union workers approve of their unions. Both themes are also highlighted on Amazon’s anti-union website. Moreover, a majority of workers nationally — the highest level of non-union workers in over four decades — would choose unions if given a free and fair choice, while 65 percent of the public approve of unions, the highest levels in almost two decades. Thus, the main problem facing U.S. workers is not, as Brown suggests, getting rid of unwanted unions, but an inability to get unions that employees want but cannot get in the face of intense employer opposition and weak legal protections.

Third, Brown holds captive meetings on collective bargaining, telling workers that employees “are not signatories to the contract,” which is an agreement between management and the union. Consultants tell employees that unions are external “third-parties” pursuing their own self-interest, rather than organizations that represent the workers. Amazon’s anti-union website also portrays the union as an outside “business” that workers “don’t know,” despite the fact RWDSU has a long and deep history of representing Black workers in the South — predominantly Black poultry workers in Alabama, among others — and supporting civil rights and racial justice causes.

Fourth, Brown holds captive meetings that bash unions as “top-down organizations” which have “exorbitant salaries and lavish expenses,” even though union financial reports are publicly and easily available through the website of the Department of Labor — as demonstrated on Amazon’s own anti-union website; and he tells employees that unions support political causes that they “may not agree with,” even though conservative organizations have long stressed that employees can opt out of political contributions. Moreover, in right-to-work (RTW) states such as Alabama — which has been a RTW state since 1953 — no employee can ever be required to pay union dues. The anti-union campaign at Bessemer — including Amazon’s anti-union website — has repeatedly stressed that employees would pay union dues, even though these could never be compulsory.

Fifth, Brown holds captive meetings on unions and job security, which stress how layoffs in unionized workplaces are generally done according to seniority — “great if you have been there the longest, bad if not” — at which “the point is there is no consideration of merit.” In reality, unionized workers generally enjoy much greater job security than their non-union counterparts, as reflected in job losses during the COVID-19 pandemic; they also enjoy higher pay and significantly superior health and pension benefits, including access to paid sick leave.

Brown concludes that employers “know that a union representation election involves a major business decision that will forever impact” their companies. “For that reason,” he argues, “we submit that it is not only the right for employers to educate the employees, it is their duty.” In recent years, strident anti-union advocates have increasingly argued this point — that employers not only have a right to oppose unionization, but a duty to speak out against unions and collective bargaining. Amazon apparently agrees with this extreme position.

Workers in Alabama — and all across America — are voting on whether to organize a union in their workplace. It’s a vitally important choice — one that should be made without intimidation or threats by employers. Every worker should have a free and fair choice to join a union.

This statement is hugely significant. Prior to this, Biden had assiduously avoided any direct comment on the Amazon dispute. He had already spoken out strongly in favor of unions and collective bargaining generally, and recently, a White House spokesperson had stated that, “President Biden has urged employers not to run anti-union campaigns or interfere with organizing and bargaining.” It is understandable that Biden is reluctant to “take sides” in an ongoing union campaign that his National Labor Relations Board may ultimately be asked to adjudicate. But it’s an enormous deal that Biden spoke out unambiguously against Amazon’s relentless and disingenuous anti-union campaign. Indeed, it may be the most pro-union statement ever by a sitting president. To find anything comparable, one really needs to go back to the 1930s, when John L. Lewis, president of the newly formed Congress of Industrial Organizations, adopted the slogan, “The President Wants You to Join a Union” to help organize the auto and steel industries. The difference is, FDR never actually said this; it was apocryphal, though believable, whereas Biden actually said it. What a difference an election makes!

Expensive and aggressive corporate anti-union campaigns, such as Amazon’s at Bessemer, are, in the words of Marty Levitt, built on deceit and run by bullies. The battle between the RWDSU and Amazon at Bessemer is a real “David vs. Goliath” fight. But, as in the original Biblical story, David sometimes wins.