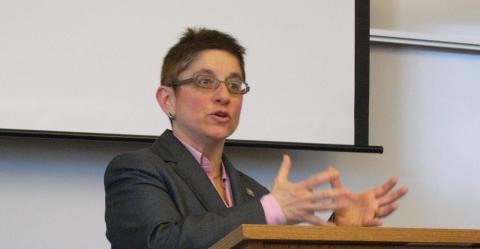 President Joe Biden nominated media activist Gigi Sohn to the Federal Communications Commission in October, to fill a Democratic seat vacant since January 2021. He renominated Sohn this January. Why has she not been confirmed yet? Advocates suspect the corporate media lobby is trying to sink the nomination of the staunch consumer advocate.

Sohn would take the fifth seat at the FCC, which is currently deadlocked with two Democratic and two Republican appointees. (Only three FCC board members can be from the same political party; in practice, three are from the president’s party and two are from the other major party.) Without a fifth member, the agency is largely nonfunctional—which is just peachy for the corporations it’s meant to regulate.

Sohn’s stalled nomination has gotten remarkably little press—with the notable exception of the Wall Street Journal, which has run three editorials (11/8/21, 12/6/21, 1/28/22) and an op-ed (11/30/21) opposing her, calling Sohn a “media censor” who wants to “silence conservative voices.”

It might seem curious, then, that right-wing outlets like OAN and NewsMax have supported Sohn’s nomination. (OAN‘s CEO later disavowed the statement of support by OAN‘s president, who is also his son.) The Journal acknowledged this in one of its editorials (12/6/21) and tried to wave away their support as “pure self-interest,” arguing again that Sohn “wants less political diversity on the airwaves” and would be “polarizing and destructive.” But it’s a tough argument to make convincingly when some of the very outlets she supposedly wants to see suppressed have spoken out in favor of her nomination. The reason Sohn has found right-wing backers—yet the Journal and its owner, Rupert Murdoch, oppose her—is because this isn’t really a right vs. left battle: It’s big vs. small.

Sohn has worked for decades in communications policy advocating for an open and accessible Internet. She was a top aide at the FCC during the Obama administration, helping implement net neutrality rules that were later repealed under Trump. Net neutrality ensures that broadband providers have to provide equal data speeds to all companies, blocking them from offering “fast lanes” for big corporations that can pay extra while throttling others. This unequal access would give unfair advantages to big corporations and stifle competition from smaller outfits. 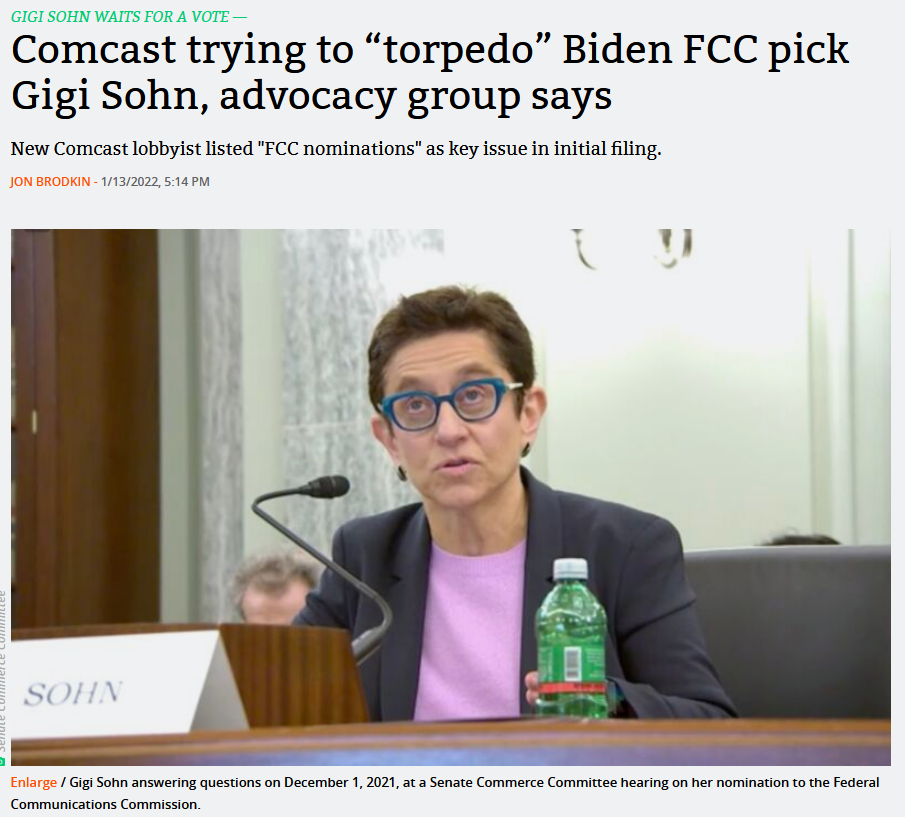 “For more than a year, the FCC has been operating without a full slate of commissioners, hampering its ability to advance all of the important tasks on its agenda,” a coalition of advocacy groups noted (Ars Technica, 1/13/22).

Perhaps even more concerning for TV network OAN—and NewsMax, which also has a TV channel—is media conglomerate control over the airwaves. Sohn spoke out against Sinclair Broadcast Group‘s attempted merger with Tribune Media Company, which would have dramatically consolidated the local broadcast TV market. In the face of mounting public opposition—and evidence of Sinclair‘s intention to violate FCC ownership rules—Trump appointee and Sinclair champion Ajit Pai was forced to put the brakes on the merger (New Yorker, 10/15/18).

“The industry serves to benefit from Gigi not moving forward and the FCC delaying its push for net neutrality and other government regulations,” telecom lobbyist John Feehery told the Washington Examiner (12/15/21). “This helps their bottom line in the next few months by delaying regulations, because the FCC would be gridlocked and slowed down on these issues,”

The FCC needs to fill its fifth seat to do its critical work regulating the country’s media infrastructure. Sohn is clearly qualified. The Senate needs to confirm her when it returns from recess.

Tell your senators to push for the confirmation of Gigi Sohn to the FCC board.

Please remember that respectful communication is the most effective. Feel free to leave a copy of your message in the comments thread here.