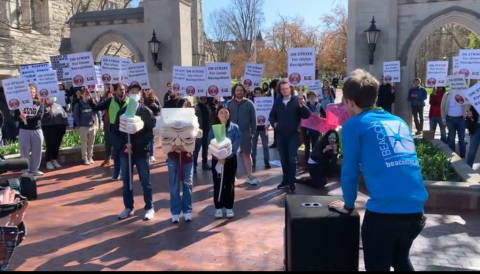 Crowds formed at several locations, including around the Sample Gates, Ballantine Hall and Swain Hall. Representatives from the Indiana Graduate Workers Coalition were happy with the turnout.

Why did IU grad workers strike?

The workers decided to strike after the university refused to recognize a successful vote to join the United Electrical Workers. The hope is the work stoppage will reopen a dialogue. Complaints include the fees graduate workers have to pay to the university, which eat into compensation many of the workers consider to be insufficient in the first place, and insufficient protections for international graduate students. Other issues include benefits and working conditions.

IU undergrad William Clay walked past one of the demonstrations. He said he supports the graduate workers in their efforts, despite his classes being affected.


"I think they've done a really good job of getting the word out about it," said Caitlin May, another undergraduate student. "Everyone's affected, because I think people have realized how many of our teachers are actually grads."

Martin Law has been a graduate student and worker at IU for several years, and his experiences brought him to the picket line at the Sample Gates Thursday morning. "It's disappointing to see that the concerns that we've been voicing for many years, even before I got here, are being ignored by the provost, by the administrators and by the president."

Law expressed disappointment in emails and other messaging sent out by IU leaders about the effort to unionize. Some emails have indicated there could be consequences for grad workers who take part in the strike.

"To respond with covering your eyes and ears while saying, 'I won't recognize you,' and then making threats," Law said, "it's just not appropriate. To me, it seems sort of undignified, and it's really disappointing."


Rong Fan has friends in the union, but the self-described conservative international student had not planned to join the demonstrations until she read an email from Bloomington campus Provost Rahul Shrivastav outlining potential consequences for graduate workers. "To be honest, I was just really angry about the email."

Katie Kearns, an IU employee, stood at the Sample Gates in solidarity with the graduate workers on strike. While she hoped there would not be retaliation from IU administration towards those taking a stand, Kearns said it was a possibility.


"This is the nature of protest," Kearns said. "That's a reality. When people push back against the way things have gone, there's going to be pushback. I think there are a lot of us who hope that there won't be. But I think there are also a lot of us who will do what we can to support graduate students in the case that there is and rally behind them."

Faculty members were called on to be present to show their support, but some said they were concerned about retaliation from IU administration. When asked about whether she feared such retaliation, gender studies professor Jennifer Maher replied, "Absolutely."

Many graduate student workers grade papers and teach classes at the university. The strike is planned to last until Tuesday.