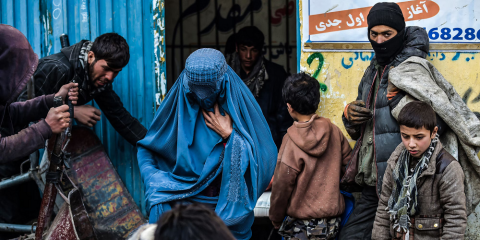 Two months ago (FAIR.org, 12/21/21), I noted the striking contrast between vocal media outrage—ostensibly grounded in concern for Afghan people—over President Joe Biden’s withdrawal of US troops from Afghanistan, and the relative silence over the growing humanitarian crisis in that country, which threatens millions with life-threatening levels of famine.

While influenced by drought and Taliban policies, the current crisis is primarily driven by the US decisions to freeze the assets of the country’s central bank and maintain economic sanctions, which have destabilized the banking system and sent the economy into a tailspin.

Last Friday, Biden announced his intention to take the $7 billion in frozen funds currently held in US banks and use them as he sees fit, giving half to a humanitarian aid trust fund for Afghans and half to families of 9/11 victims.

Lest anyone imagine this to be generous in any way, note that the $7 billion—most of which originated as international aid, and representing the vast majority of the central bank’s assets—belongs to the Afghan people, not to Biden. And the Afghan people bear zero responsibility for the 9/11 attacks. On the contrary, they are also its victims, because of the subsequent US decision to invade and occupy their country.

Beyond that, giving them back half of the money that is rightfully theirs in the form of “aid”—instead of returning it to the banking system—is not only a band-aid that doesn’t solve the country’s liquidity problem, it’s nearly impossible to do anyway, given the sanctions still in place (Relief Web, 2/12/21).

Biden’s announcement offered a perfect hook for reporting on the humanitarian crisis in Afghanistan, and anyone who truly cares about the Afghan people and their rights should be tearing their hair out and screaming at the top of their lungs about this audacious injustice that will surely result in more deaths and hardship. But despite their wailing about the Taliban’s impact on Afghan women’s futures, few in US TV news seem concerned about those same women facing starvation as a result of US policy.

Since Biden’s announcement on February 11, there have been a total of 10 mentions on ABC, CBS, NBC, CNN, Fox and MSNBC: six the day of the announcement, four the next day, and none by the third day. The broadcast network news shows, which have more viewers than cable news, aired exactly zero reports on the issue. CNN made eight mentions, MSNBC two and Fox one. Six of the ten were brief mentions that noted no criticism of the move. 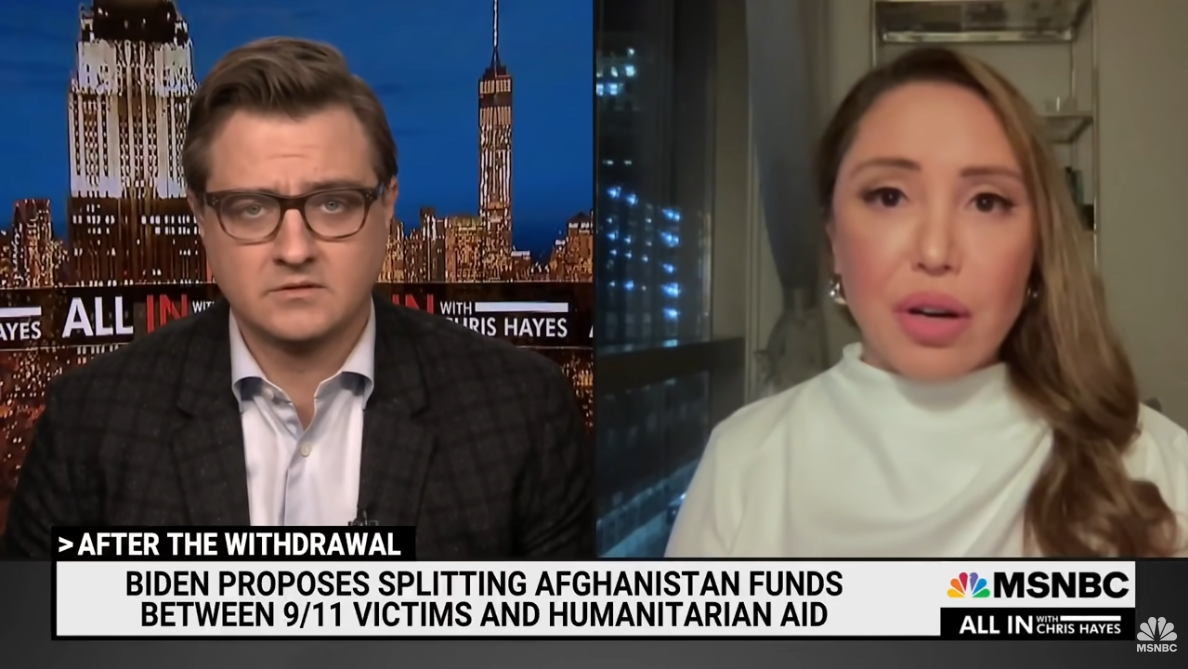 Masuda Sultan to Chris Hayes (MSNBC, 2/11/22): “This was a devastating day for Afghans who were hoping to have a sign that their economy would have a chance of surviving.”

Only two shows deemed the story big enough to bring on a guest to discuss it: Jake Tapper‘s CNN show (2/11/22) and Chris Hayes‘ MSNBC show (2/11/22). Hayes devoted the last several minutes of his show to an interview with guest Masuda Sultan of the group Unfreeze Afghanistan. Hayes noted that the US “could help [the Afghan] people by simply doing one thing, unfreezing of the billions of dollars of Afghan government assets that are sitting in New York banks,” and Sultan argued that Biden’s move would simply create “a bigger and bigger humanitarian disaster, by not allowing banking to function and not allowing the economy to be back on its feet”:

Tapper, in contrast, invited a family member of a 9/11 victim for her perspective on the decision. (Tapper did ask his guest to respond to “the people who say this is just penalizing this move today, the Afghan people who are suffering greatly, and they shouldn’t be hurt because of what happened on 9/11.”) 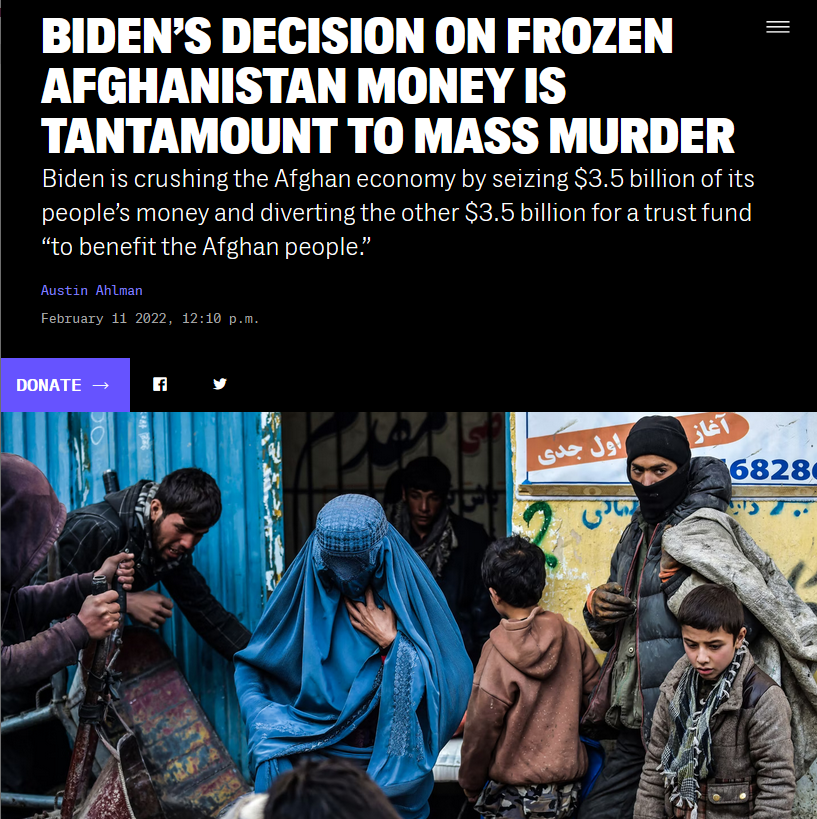 Austin Ahlman (Intercept, 2/11/22): “The decision puts Biden on track to cause more death and destruction in Afghanistan than was caused by the 20 years of war that he ended.”

CNN‘s Newsroom (2/11/22) and New Day Saturday (2/12/22) were the only other two shows to even briefly mention any criticisms or questions about the legitimacy or efficacy of the decision.

On Newsroom, reporter Jeremy Diamond noted that “there are questions, though, about whether taking these funds away from the central bank could make it more difficult for Afghanistan to stabilize its currency.”

A serious report would have explained that these aren’t merely questions, they’re certainties, and Biden knows it. As a senior Democratic foreign policy aide told the Intercept‘s Austin Ahlman (2/11/22), Biden

has had warnings from the UN secretary general, the International Rescue Committee and the Red Cross, with a unanimous consensus that the liquidity of the central bank is of paramount importance, and no amount of aid can compensate for the destruction of Afghanistan’s financial system and the whole macro economy.

On CNN, Diamond’s colleague Jim Sciutto concluded: “Trying to strike some sort of middle line here between not helping the Taliban, but somehow getting help urgently to the Afghan people.”

It’s the best possible framing a murderous multi-billion-dollar theft could get.