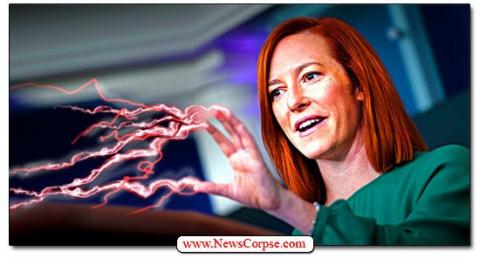 The White House correspondent for Fox News, Peter Doocy, has made it his mission to try to construct blatantly biased questions during the White House press briefings. For the most part he has failed miserably, as press secretary Jen Psaki has easily batted his screwballs out of the park.

Undeterred by repeated smackdowns, Doocy tried again on Wednesday. He chose for his lame attempt at a journalistic sucker punch a query about comparing the COVID fatalities during the Trump administration to those of the Biden administration. But his ignorance and inability to grasp that Psaki is his intellectual superior in every way, led to another embarrassing drubbing (video below):

Doocy: In 2021, when roughly 220,000 Americans had already died of COVID, Joe Biden said about Trump, "Anyone who was responsible for that many deaths should not remain as President of the United States of America." Is that still the standard now that more Americans have died under President Biden?

Doocy really needs to be relieved if he didn't see Psaki's effortless response coming. He left her wide open for a crushing retort that blistered him and his offstage overseer, Donald Trump:

Psaki: I think the fundamental question here is what are you doing to save lives and protect people. And the former President was suggesting people inject bleach. He reportedly didn’t even share with people he was going to interact with that he tested positive for COVID himself. He continued to provide a forum for misinformation, which probably led to people not taking steps forward to protect themselves, to wear a mask, to eventually get vaccinated.

This President has made the vaccine widely available. He’s relied on the advice of his health and medical experts, and he is trying to be a part of solving this crisis, getting the pandemic under control. And I think there’s a pretty stark difference between their approaches.

If one didn't know better, it would almost seem like Doocy was setting Psaki up to hit home runs. She masterfully exploited his leading question to remind everyone of how terribly Trump mismanaged the pandemic response. She exposed Trump's ignorance, negligence, carelessness, and deliberate malfeasance. And she closed with the record of President Biden's compassionate and competent leadership through harrowing times.

Doocy has the distinct disadvantage of being employed by the network that is most responsible for the misinformation about COVID that has resulted in their killing off their own viewers. It's the network that has maligned the renowned and beloved Dr. Fauci as comparable to the Nazi sadist and murderer, Josef Mengele.

What's more, Doocy is rehashing the poor math that suggests that Biden's pandemic response is no better than Trump's. That was thoroughly debunked here at News Corpse last week, noting that the massive growth in infections and fatalities during the Trump years was turned around into spectacular declines by Biden:

"In real terms, during Trump’s last year in office the number of fatalities went from 10 (when Trump said it would soon decline back to zero) to 400,000, an increase of four million (4,000,000!) percent. During Biden’s first year in office the number of fatalities went from about 400,000 to 800,000, an increase of only 100 percent. That’s a fatality rate percentage decline of 99.9975 percent. So it is brazenly dishonest to say that Biden did no better than Trump. The truth is that during Biden’s term the United States went from 4000 people dying every day by the end of Trump’s term, to about 1,000 deaths a day under Biden, A decline of 75 percent."

Doocy may or may not be aware of these facts. But he clearly doesn't care. All he's interested in is sandbagging the press secretary. It's just too bad that he is so painfully terrible at it. But you have admit that he has an astonishing tolerance for the humiliation he endures nearly every day.

News Corpse
Community (This content is not subject to review by Daily Kos staff prior to publication.)