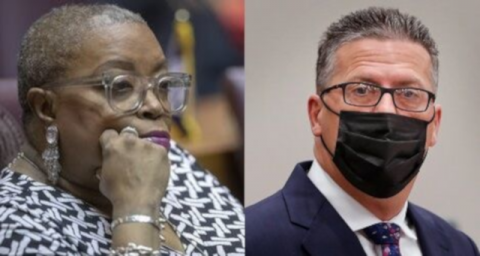 After a truly revolting episode in the Indiana Statehouse, a recent quote from Sacha Baron Cohen seems particularly apt. Cohen was quoted as saying “If you’re protesting against racism, you’re going to upset some racists.”

Which brings me to what transpired in Indiana’s Statehouse on Thursday.

During the House session on Thursday, a bill concerning school district boundaries that some are calling racist sparked an emotional and angry debate. Several legislators walked out of the chamber, GOP legislators in their seats booed and shouted “no” and “stop,” and some members even clashed in the halls after Black legislators spoke out against the bill.

The confrontations broke out on a day when Black members were celebrating Black History Month by wearing traditional African garb.

“We kind of felt like it kind of fed into how the members were acting,” said Rep. Robin Shackleford, D-Indianapolis. “I think having on the African garb and our members going up there stating how they felt about a bill, I think that just antagonized them even more.”

According to several media reports, the boos and jeers in the chamber were followed by confrontations in the hallways and the mens’ restroom.

Among the lawmakers who got up and walked out was Jim Lucas, who has previously been sanctioned by the GOP Speaker of the House for sharing a racist meme. (Our daughter has told me that she sees Lucas’ Facebook page on occasion, and that it is an appalling collection of racist and conspiratorial commentary.) The chairwoman of the Black caucus has called for Lucas’s removal from several committees, pointing to his intransigence and hostility. She also called for the entire House to have bias training, noting that “his thinking and his behavior is enabled by the complacency of some of our colleagues.”

“Complacency” is a kind word for it. Thursday’s behavior certainly underscored her point.

Efforts of largely white school districts to break away from districts with significant numbers of  minority students, and to– not-so-incidentally– take their funding with them isn’t unique to Indiana. Both The Atlantic and The New York Times have reported on instances in Louisiana and Alabama in which white communities have tried to separate from minority communities.

“Laws in 30 states explicitly allow communities to form their own public-school systems, and since 2000, at least 71 communities across the country, most of them white and wealthy, have sought to break away from their public-school districts to form smaller, more exclusive ones,” The New York Times reported, citing a study by EdBuild.

Predictably, the author of the bill denied any racial intent, claiming the measure was based on concerns about transportation. If you believe that, I have some underwater real estate you may be interested in purchasing…but even giving him the benefit of the doubt, the unseemly reaction by many lawmakers to legitimate concerns voiced by their Black colleagues was the give-away. Booing, jeering and accosting lawmakers and witnesses who dare to raise an obvious issue is hardly the principled debate on the merits of a bill that taxpayers and voters have the right to expect.

The bill passed the House with a vote of 53-42. Fourteen Republicans joined Democrats in opposition. It will now move to the Senate, where more optimistic Hoosiers can hope for more civil–and less revelatory–consideration.

Episodes like this go a long way toward explaining the “brain drain” that keeps educated people from settling in the state. If I were thirty years younger, I wouldn’t stay in Indiana either. There’s a reason Indiana is called the buckle of the Bible Belt–or more colorfully, the middle finger of the South.