The Dark History of School Choice 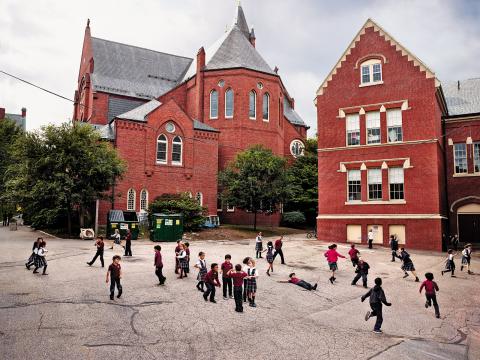 During her tenure as secretary of education, Betsy DeVos repeatedly asked Congress to allocate billions of dollars for vouchers for religious and private schools. She was repeatedly rebuffed. Even Republican members of Congress were unwilling to use the federal education budget to pay for vouchers. After all, most of their constituents’ children attend public schools.

After the pandemic struck, DeVos tried again. Late last March, Congress passed a $2.2 trillion relief bill called the Coronavirus Aid, Relief, and Economic Security (CARES) Act, which allocated $13.2 billion for K–12 education. Congress expected that the money would be shared, as federal education funds typically are, among the nation’s nearly 100,000 public and 7,000 charter schools, as well as private schools based on the number of low-income students they enroll. DeVos instead directed states to share the money allotted to public schools with private and religious schools that enrolled middle-income and affluent students. The NAACP and several states responded with lawsuits, arguing that her order was illegal. Three federal judges in different parts of the country ruled against DeVos, and she backed down.

But the Trump administration found another way to enrich charter and private schools. The Paycheck Protection Program (PPP), also part of the CARES Act, was supposed to rescue small businesses. Lobbyists for the charter industry, however, encouraged charter schools to apply as nonprofits, thus double-dipping into both the public school and PPP funds (public schools were ineligible for PPP funding). Private and religious schools also qualified for PPP funds as nonprofits. Therefore, through a bill supposed to aid small businesses at risk of bankruptcy, thousands of charter, private, and religious schools received an average of about $855,000 each, compared to about $134,500 per public school through CARES. Religious schools of every denomination, elite private schools, and more than one thousand charter schools received anywhere from $150,000 to $10 million each according to a database compiled by a website called COVID Stimulus Watch. Antelope Valley Learning Academy, a charter school in California, received $7.8 million. The for-profit Academica Corporation charter school chain won $28.6 million. Buckingham Browne & Nichols, an elite private school in Cambridge, Massachusetts, which has a thousand students, high school tuition of $52,300, and an endowment of $75 million, received between $5 million and $10 million. The Paycheck Protection Program turned out to be a multibillion-dollar bonanza for nonpublic and religious schools, at a time when most public schools lacked the funding to pay for social distancing, health measures, and personal protective equipment for students and staff.

DeVos has spent the past three decades leading a campaign against public schools and personally subsidizing political candidates who favor private alternatives. Trump’s decision to appoint her as secretary of education was a reward to right-wing Christian groups that share her extremist views. In The Power Worshippers, Katherine Stewart documents these groups’ long-standing crusade against public schools. They are “the New Right,” the Moral Majority, Christian nationalists, and the Christian Coalition: angry crusaders against secularism, liberalism, abortion, feminism, gay rights, and public schools. They include groups like Capitol Ministries, Focus on the Family, the Family Research Council, Concerned Women for America, the American Family Association, the Alliance Defending Freedom, the Council for National Policy, and the World Congress of Families. At least eleven members of the Trump cabinet met weekly for Bible study with Ralph Drollinger, the leader of Capitol Ministries, who argues that God favors private property owners and that social welfare programs “have no basis in Scripture.” The needs of the poor, he writes, should be addressed not by government but by “the husband in a marriage…the family (if the husband is absent) and…the church.”

Initially, the animating issue behind this amalgam of radically conservative groups was not abortion, Stewart’s reporting shows, but protection of the tax-exempt status of segregated schools and universities after the Supreme Court’s Brown v. Board of Education decision of 1954. Many of the “segregation academies” for whites that sprang up in response to Brown were affiliated with conservative religious groups that believed that racial segregation was ordained by God. But their leaders knew that they could not build a national movement around the issue of protecting the tax advantages of racist schools. Not until 1979, six years after Roe v. Wade, did the religious right settle on abortion as its unifying cause.

Diane Ravitch is a historian of American education. Her most recent book is Slaying Goliath: The Passionate Resistance to Privatization and the Fight to Save America’s Public Schools. (January 2021)