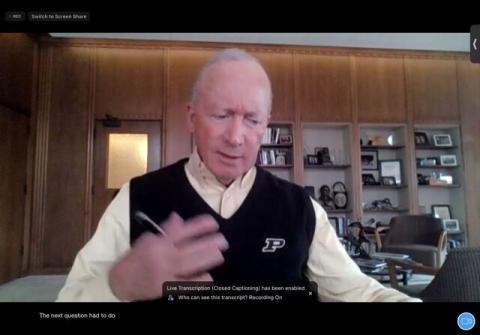 Purdue President Mitch Daniels made a statement about the investigation into the incident between a Purdue police officer and a Black student at the university senate meeting; the senate voted not to add Mental Health Awareness Week to the official academic calendar and reworded language of the medically excused absence policy for students.

Daniels said in his opening remarks that the prosecutor on the PUPD investigation advised him to say as little as possible about the situation until the investigation concludes. He did say, however, that there’s “no pattern, let alone precedent” of excessive use of force by Purdue police.

“There is not a single case or complaint of excessive use of force against any student of any color for seven years under the current record-keeping system,” Daniels said.

“We’re not passing judgment on whether there was intent,” biological sciences professor Ximena Bernal said. “The objective of this resolution is to bring the community together to support those that are most affected.”

After postponing voting on the bill until February, the university senate opposed adding Mental Health Action Week to the official academic calendar.

“The goal is to institutionalize the focus on mental health,” engineering education professor Alice Pawley said.

“I was fully supportive of the idea of adding Mental Health Action Week in some ongoing way to our university calendar,” said Provost Jay Akridge. “The academic calendar has a very particular purpose, and I do have concerns about opening it up and adding information like this that, while important, is not directly linked to the academic progress of a student.”

The senate passed a bill to provide excused absences to students with serious mental or physical ailments.

The bill, originally proposed in November, would allow students to request a medically excused absence with evidence of a medical ailment that may keep them from their studies, according to previous Exponent reporting.

The senate discussed a new bill which intends to recognize and value the voices and contributions of Black and underrepresented faculty and staff by growing their numbers.

The bill, sponsored by English professor Brian Leung, would require the administration and all departments to allocate additional resources to attract and retain Black and underrepresented faculty and staff.

The document states that the bill would also require staff and faculty to follow the recommendations of the Provost’s Advisory Committee on Diversity and Inclusion, in order to foster a climate of belonging.

The senate proposed an optional session during winter break for students to take a class or study abroad.

“It would be three weeks long and occur between the existing fall semester and spring semester,” engineering professor Thomas Siegmund said. “No further changes to the academic calendar would take place.”

Students would have the opportunity to take an asynchronous three-credit course during winter break or go on a study abroad trip, College of Health and Human Sciences Dean Marion Underwood said.