Some Newark schools face laptop shortages, leaving families to find their own devices 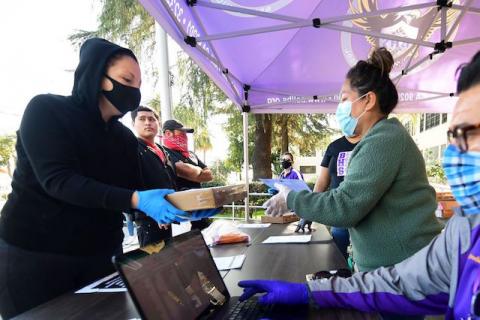 Nearly five months after Newark schools went entirely virtual and just one week before online classes resume, the state’s largest school district is still struggling to get every student online.

Some schools have told parents that laptop shipments have been delayed, leading to a laptop shortage like the ones hobbling districts across the country. Free internet options are also in short supply, with one provider now charging for a previously free service and a citywide Wi-Fi network offering only spotty coverage.

The device shortfall has left schools to rely on donations from celebrities and Good Samaritans, and forced some families, already strained financially by the pandemic, to purchase the necessary technology themselves.

When Newark parent Niurka Ortiz-Murray recently sought a laptop for her preschooler, his school said it was all out. New computers were on backorder and might not arrive for months, she said she was told.

Now Ortiz-Murray, who works at a storage facility, is considering making weekly payments to Rent-a-Center so her son will have a laptop when school starts Sept. 8.

With a rising number of school districts starting the year virtually, students can’t attend class if they don’t have the proper technology. And yet, as of June, about one in six public school students in New Jersey didn’t have the devices or internet connection needed for online learning, according to state estimates.

Advocates and lawmakers say New Jersey has not done enough to close that vast digital divide. The state was too slow to provide technology funding and failed to coordinate purchasing, forcing districts to compete for a limited supply of devices, critics say.

The need is greatest in cities such as Newark, where an estimated one in five households did not own a smartphone or computer before the pandemic.

After the coronavirus shuttered schools in March, nearly 30% of the district’s roughly 36,000 students could not get online at home, according to a state survey. Instead, they had to complete paper packets or type out assignments on their phones. Schools rushed to distribute the laptops they had on hand, but there weren’t enough to go around. 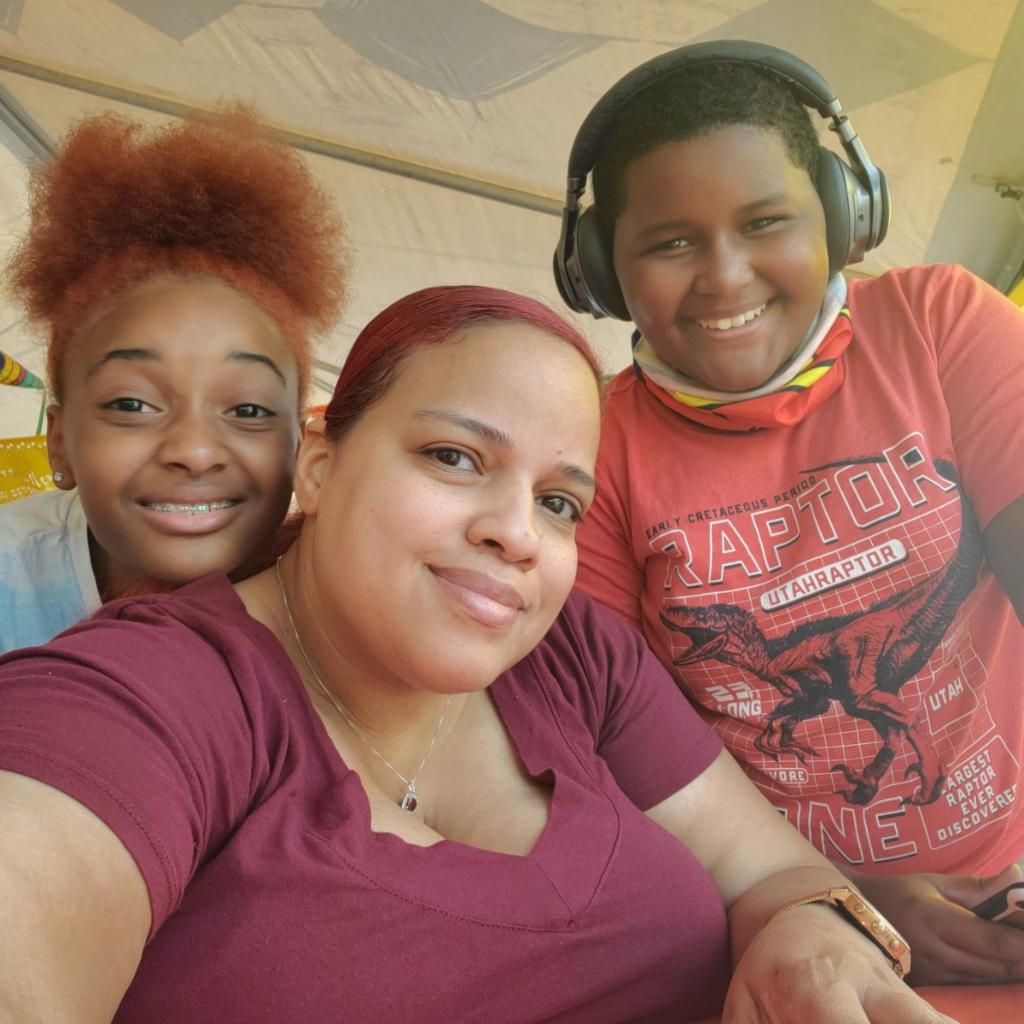 Neoshi Baker opted to buy her two children refurbished laptops after their school said it was still waiting for new Chromebooks to arrive.  Courtesy of Neoshi Baker

Nearly half a year later, the technology gap persists. Last month, the district told donors that it needed more than 4,400 student laptops and 650 hotspots, according to an Aug. 4 memo obtained by Chalkbeat. The district also recently applied for a state grant to purchase another 6,600 devices and hotspots. The district did not respond to questions or a public records request, so it’s unclear whether those numbers have changed.

Parents like Neoshi Baker have borne the brunt of the device shortage.

This spring, only one of her two children received a laptop from the school they attend, Baker said. When she asked for a second device last week, the school said it had none to give because a shipment of new Chromebooks hadn’t arrived. So Baker, a single parent who works in medical billing, paid $300 for two refurbished laptops she found online.

“You’re barely providing them a free education when I have to pull from my pocket to pay for everything,” she said.

A ‘mad scramble’ for devices

As schools in New Jersey and nationwide rush to equip students for remote learning, many are facing delays.

The Paterson school district said this month that more than 13,000 Chromebooks it ordered in June would not arrive by the start of school in September. The crisis was averted only after a different supplier agreed to sell the district devices.

The principal of one district school said that hundreds of Chromebooks that were ordered in March have yet to arrive. She expects the school to eventually obtain enough laptops for every student — but not before classes start.

“The problem is that there’s a huge backorder of Chromebooks because of the huge demand all over the world,” said the principal, who requested anonymity. “Our teachers will be creative and find ways to work around it until every student has one.”

Charter schools are also struggling to stock up on devices.

They need new laptops to replace ones they loaned to students, and because the schools plan to offer more live lessons this fall, students who might have shared devices this spring will now need their own. All told, Newark’s charter sector — which enrolls more than 19,000 students — needs about 5,000 to 7,000 additional laptops, according to a survey by the New Jersey Children’s Foundation.

And like the city’s traditional schools, some charters have had trouble getting their hands on new devices.

“There’s a mad scramble for vendors with supply,” said Kyle Rosenkrans, the foundation’s executive director, who coordinates weekly virtual meetings with charter leaders. “There’s no state-level government coordination, so people are really fending for themselves.”

The Newark-based Education Law Center echoed that assessment. In a letter last week to Gov. Phil Murphy and other elected officials, the center said the state should establish a cooperative purchasing program for districts trying to buy computers.

“At present, districts are competing against each other for contracts to procure devices,” wrote the center’s executive director, David Sciarra, “leading to shortages, delays and an unacceptable ‘free-for-all’.” 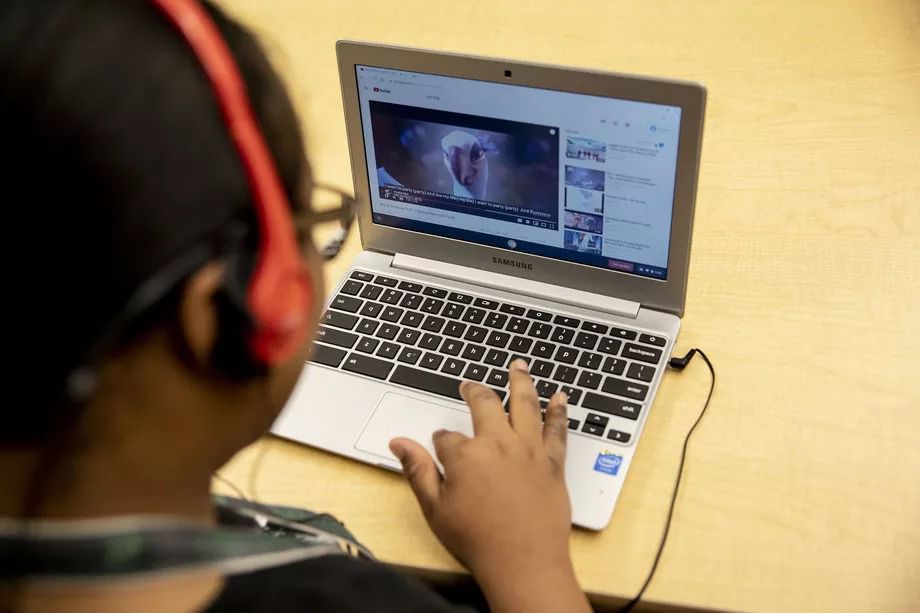 Some families have reported problems with free or discounted internet options, including slow speeds and spotty coverage.  Nathan W. Armes/Chalkbeat

This spring, Optimum, a subsidiary of the Altice cable company, provided free home internet to Newark families with students in K-12 schools or college. But beginning in July, families had to pay about $15 per month to continue the service. By contrast, some school districts, such as Philadelphia, have promised to cover families’ home internet costs this fall.

An Altice spokesperson said the district is paying for a service plan that allows school-issued devices to connect to public Wi-Fi hotspots.

However, some families have reported problems connecting to the free wireless network. One parent said her children could only access it when they placed their laptops near a window.

Others said the discounted home-internet service can slow to a crawl when multiple children, and often a parent who’s working remotely, use the internet simultaneously.

“It’s a little slow, I’m not going to lie,” said Judith Hernandez, who has four children in Newark schools and used the Optimum service this spring. “I guess that’s something we’re going to have to deal with until they come up with a better solution.”

The district said it will provide wireless hotspots to some families this fall, but has not said how many families or which ones.

A long wait for state support

As Newark and other districts grapple with the digital divide, they’ve received limited assistance from the state.

This spring, Gov. Murphy vetoed a bill that would have provided districts with state funding to pay for technology, saying the state could not afford the bill’s indeterminate cost in the middle of the pandemic. Murphy did not offer an alternative until July, when the state launched a $54 million technology grant program for districts using federal coronavirus relief money. Even then, the grant amount fell far short of the full cost of giving every student a device, so Murphy asked private donors to pitch in.

State Sen. Teresa Ruiz, who sponsored the bill that Murphy vetoed in May, said the state’s delay in launching the grant program made it harder for districts to purchase technology in time for the fall.

“I started talking about this two weeks into the pandemic,” she said. “It’s just unfortunate it took that long to set up a program.”

The Education Law Center also criticized the state’s response. It said the state has given districts too little funding for devices, which it warned could violate students’ right to a free public education.

“These technology resources are now an essential element of education,” said the center’s recent letter to state officials, “and the state is constitutionally obligated to make certain the requisite tools are provided to all students.”

A Murphy spokesperson did not immediately respond to a request for comment; an education department spokesman declined to comment.

The Newark school district did use a portion of its $18.3 million in federal coronavirus relief funds to purchase technology and applied for a state grant. It also received $75,000 from Altice to purchase devices, $50,000 from PNC Bank, and an unspecified amount from the WeLoveU Foundation, a humanitarian group started in South Korea.

Still, it has fallen on individual parents like Gloria Crespo to make sure their children are ready for remote learning.

Crespo said she recently asked her children’s school to replace the used and defective laptops they were given, but the school said it had no new devices. So Crespo, a single parent with four children in district schools and one in college, said she’s planning to buy two new laptops.

“I’m just trying to get my children an education,” she said. “Who’s going to help me fund this?”