The GOP And QAnon 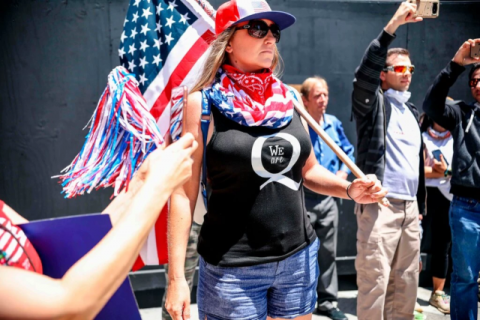 GOP Senator Ben Sasse says all the right things–although his voting history is, shall we say, a bit more complicated. Sasse has a recent essay in the Atlantic in which he challenges his party to choose between conspiracy and reality–between the “delusional QAnon conspiracy theory,” and rationality.

We hear a lot about Qanon, but to understand not just Sasse’s argument but the political moment we inhabit, it’s important to recognize just how insane it is.

Although there are various iterations, the basic “theory” that supporters accept requires them to believe  that a “righteous” Donald Trump (!) is leading a “historic quest” to expose the fact that America’s federal government has been captured and is being controlled by a global network of cannibalistic pedophiles. This “cabal” includes not just the despised “deep state” bureaucrats, but also the Supreme Court’s Chief Justice and at least a dozen senators (including Sasse), along with George Soros and other notable Jews. (The conspiracy borrows heavily from the Protocols of the Elders of Zion.) When Mike Pence explained that he couldn’t refuse to accept the certification of electoral votes, QAnon cultists added him to the network, ignoring his four years of sniveling sycophancy,

Millions of Americans actually believe this insanity. Virtually all of them are Republicans.

Writing in the immediate aftermath of the Capitol insurrection, Sasse makes what should be an obvious point: the GOP can be a political party, or a bizarre cult, but not both.

The violence that Americans witnessed—and that might recur in the coming days—is not a protest gone awry or the work of “a few bad apples.” It is the blossoming of a rotten seed that took root in the Republican Party some time ago and has been nourished by treachery, poor political judgment, and cowardice. When Trump leaves office, my party faces a choice: We can dedicate ourselves to defending the Constitution and perpetuating our best American institutions and traditions, or we can be a party of conspiracy theories, cable-news fantasies, and the ruin that comes with them. We can be the party of Eisenhower, or the party of the conspiracist Alex Jones. We can applaud Officer Goodman or side with the mob he outwitted. We cannot do both.

As he notes, prior to the assault on the Capitol, GOP leadership figures and consultants told themselves that they could “preach the Constitution while winking at QAnon.”  What they have discovered–one hopes–is that such a strategy is impossible. If the party does not reject conspiracy theories, it will be consumed by them.

Sasse provides a perfect illustration of the fecklessness of Republican leadership:

The newly elected Representative Marjorie Taylor Greene is cuckoo for Cocoa Puffs. She once ranted that “there’s a once-in-a-lifetime opportunity to take this global cabal of Satan-worshiping pedophiles out, and I think we have the president to do it.” During her campaign, House Minority Leader Kevin McCarthy had a choice: disavow her campaign and potentially lose a Republican seat, or welcome her into his caucus and try to keep a lid on her ludicrous ideas. McCarthy failed the leadership test and sat on the sidelines. Now in Congress, Greene isn’t going to just back McCarthy as leader and stay quiet. She’s already announced plans to try to impeach Joe Biden on his first full day as president. She’ll keep making fools out of herself, her constituents, and the Republican Party.

In the remainder of the essay, Sasse makes a bow to the obligatory “both sides” equivalence (the Left has crazy people too!), and points a pop-sociology finger at media–all media, not just social media and the Internet; he also blames the collapse of “institutions” and “America’s loss of meaning.” If you click through and read that part of his essay, you can decide for yourselves whether you find it particularly helpful or insightful. (Spoiler alert: I didn’t.)

That said, Sasse is clearly correct when he says the GOP cannot be a “big tent” that includes people like Jeff Flake, Ben Sasse and even Liz Cheney–people we may strongly disagree with but still recognize as serious adults– together with lunatics like Marjorie Taylor Greene, Jim Jordan, Devin Nunes and Louie Gohmert.

No tent is that big. Sasse is clearly correct when he says that the Republican Party must choose between insanity and reality.