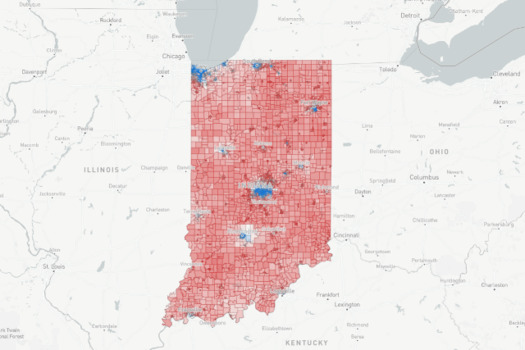 INDIANAPOLIS - Troubled by the lack of redistricting reform at the Statehouse, voting-rights advocates in Indiana are taking matters into their own hands.

Julia Vaughn, policy director at Common Cause Indiana, contends a broad swath of the state is unrepresented due to unfairly drawn legislative districts, noting that Republicans have held trifecta control of state government since 2011.

So, she helped create the Indiana Citizens Redistricting Commission, made up of three Republicans, three Democrats and three voters with neither political affiliation, ranging in age from 19 to 86. Vaughn said the commission is listening to voters' concerns about current district maps.

"We're asking Hoosiers to weigh in on what criteria should drive redistricting here," said Vaughn. "Should we work towards districts that emphasize geographic compactness? Or is it better to draw maps that seek to enhance political competition, when and where it's possible?"

The Commission is holding virtual meetings for each congressional district. The next is tomorrow with District 3. Learn more or register at 'allinfordemocracy.org.'

She explained it allows the public to draw maps that can be shared with lawmakers.

"Census data is months late," said Duchin. "And that means that the precision, line-drawing, ultra-careful pixel-by- pixel gerrymander won't be able to be drawn until September or October. And that gives us an incredible opportunity."

Vaughn explained the commission will present the General Assembly with a report of its findings and suggestions for fair and balanced voting districts.

"In the end," said Vaughn, "our process will demonstrate that a citizens redistricting commission will produce maps that serve the interests of voters and communities, not incumbent politicians."

Republican leaders say they'll hold public hearings ahead of their redistricting work, and that it will be an open process.

Support for this reporting was provided by the Carnegie Corporation of New York.