New wave of teachers’ strikes rolls across US 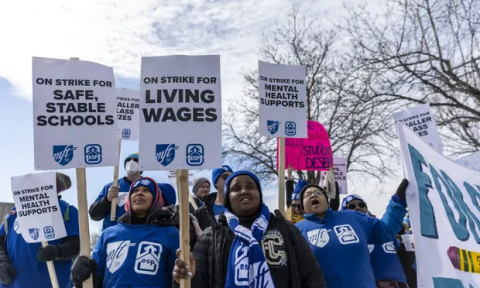 Thousands of teachers around the United States are resuming a strike wave in education that swept the country in 2018 and 2019, before the Covid-19 pandemic.

Over the past few weeks, teachers have gone on strike in Sacramento, California, Minneapolis, Minnesota, Sonoma county, California, Riverdale, Illinois, and Proviso, Illinois, as teachers in other districts have authorized strikes. Earlier this year, teachers in Chicago, Illinois, were locked out by Chicago Public Schools over their demands for pausing in-person learning during a Covid surge.

About 200 teachers at Summit Charter Public Schools in California and Washington – a charter school network supported by funds from the philanthropic foundations of Mark Zuckerberg, Bill Gates, Jeff Bezos and other wealthy Silicon Valley investors – have been fighting for a first union contract since unionizing in December 2019. The move came despite opposition from school administration, which included the firing of three union-supporting teachers.

Negotiations have been at an impasse since 2021, and now teachers are threatening to take steps toward a strike if a new contract isn’t reached withthe administration, which includes the highest-paid school administrator in California, CEO Diane Tavenner, with a salary of more than $450,000 annually.

During the pandemic, teachers at Summit faced threats of pay freezes and layoffs.

“If we don’t come to an agreement as soon as possible, our teachers are preparing for a strike,” said Janine Peñafort, a Spanish teacher at Summit School Prep in Redwood, California, and president of Unite Summit Teachers, which represents teachers at the schools. “Ever since Summit expanded their schools, teachers have had less of a say in the decisions being made in our school. I think that sense of powerlessness and our demanding workload causes a lot of teachers to leave our schools every year.”

The union has argued that despite millions of dollars in funding from wealthy billionaires, Summit Public Schools imposes austerity on teachers and schools, which has contributed to high turnover of teachers, lack of support for English language learning students, and an intense workload, which includes mentorships with individual students and more work days than other school districts.

Peñafort cited a recent retention survey conducted by the union that found about half of all teachers at Summit Public Schools did not plan to return next school year. Amid high turnover, Peñafort argued teachers were expected to serve as mentors for students throughout their four years of high school, but have no job security.

“What we’re advocating for is a two-year probationary period to have that sense of security, especially since the past two years during the pandemic, teachers shifted to virtual learning within a day, showing the value and dedication we put into our jobs every single day,” she added.

In Sacramento, California, more than 4,000 teachers and staff represented by Sacramento City Teachers Association and Service Employees International Union 1021, began a strike on 23 March over severe staffing shortages and Covid-related issues as new union contract negotiations with the city’s school district have been at an impasse.

Workers voted overwhelmingly to authorize the strike earlier this month, with 95% voting in favor of striking with Sacramento City Teachers Association and 97% in favor of SEIU 1021. SCTA represents about 2,800 staff in the district, and SEIU 1021 represents an additional 1,800 school workers.

“It’s just reached past a crisis point,” said David Fisher, president of SCTA and a second-grade teacher for over 20 years. “The district has been saying for years, falsely, that they were in some sort of economic turmoil, even claiming they were on the precipice of state takeover. It turns out, it wasn’t true then and it’s even less true now.”

Fisher argued as the school district has received millions in Covid-19 relief funds and state funds, severe staff shortages are leaving students and teachers without proper support. The district has about 10,000 students without a permanent teacher. An additional 600 students are on wait lists for independent study, with 14 teacher vacancies for the program. He also argued the district had continued laying off or was refusing to hire support staff such as teacher assistants.

“Instead of investing these dollars on the students, they are just amassing this giant rainy day fund, but it’s pouring out,” added Fisher. “Every student deserves at the very least a teacher in the classroom. What we’ve been experiencing and families have been experiencing is 10,000 students that come to school don’t have a regular teacher, 3,000 or so don’t even have a substitute so they get corralled into cafeterias or split up between classes.” 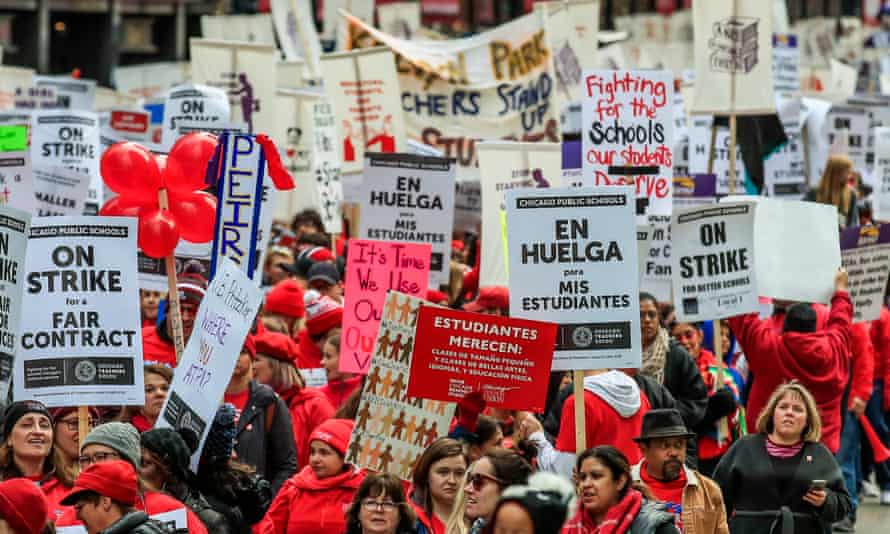 Sacramento City Unified School District argued the strike hurts students and argued their current proposals reflect what the district can afford, with the next successor contract providing an opportunity for the unions and district to negotiate to improve staffing issues.

In Minneapolis, Minnesota, over 4,000 teachers represented by Minnesota Federation of Teachers Local 59 have been on strike since 8 March over low pay, a lack of support staff and resources for students, and high turnover. More than 640 teachers and support staff have left the district in the past 18 months.

“We’re fighting for safe and stable schools, and what that looks like is systemic changes to the way that education is run in Minneapolis,” said Kearney Burns, a special education teacher at Hiawatha community school in Minneapolis. “What is being done in Minneapolis is trying to run our school systems like a business. There’s a lot of top-down decision making and not a lot of input from actual stakeholders.”

Burns emphasized the need for support staff positions to be fully staffed and for these workers to be properly compensated with a living wage, such as educational support professionals who currently make as little as $24,000 a year.

She noted teachers had received immense community support through the strike, as these improvements that teachers are fighting for will benefit students and the community.