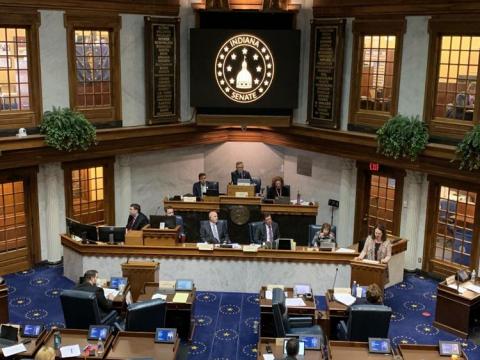 Brownsburg elementary teacher Christianne Bebe testified against SB 167, which would require teacher materials to be posted online and create a materials advisory commission. Bebe said that as an elementary teacher, she teaches seven subjects and uses over 75 materials a week, making the expectation for each material to be reviewed and approved unreasonable.

INDIANAPOLIS—Educators, students and concerned parents were still testifying late into the afternoon Wednesday at the Indiana Statehouse as an hours-long Senate committee meeting discussed a bill that would give parents more control of their child’s education and limit what can be discussed in classrooms.

Senate Bill 167, authored by Sen. Scott Baldwin, R-Noblesville, is a multifaceted education bill. It aims to create more transparency with parents regarding classroom topics and materials, Baldwin said. It would prevent teaching of eight subjects that Baldwin called “divisive topics” and phrased as follows in the bill:

The bill would create a curricular materials advisory committee, which would be composed of parents, teachers and administrators. The bill indicates that the chair of the committee should be a parent of a student within the school corporation. It would also require teachers to post lesson plans and materials online.

Teachers wouldn’t be personally penalized for violating the bill, but parents would be encouraged to take up civil suits against school systems, Baldwin said.

Although Baldwin said he began drafting the bill during the last legislative session, the bill comes as parents have been increasing their attendance at school board meetings in many places over concerns based on the ideas of critical race theory, or CRT, and social-emotional learning, or SEL.

According to Edweek.org, “critical race theory is an academic concept that is more than 40 years old. The core idea is that race is a social construct and that racism is not merely the product of individual bias or prejudice but also something embedded in legal systems and policies.” According to CASEL.org, “SEL is the process through which all young people and adults acquire and apply the knowledge, skills and attitudes to develop healthy identities, manage emotions and achieve personal and collective goals, feel and show empathy for others, establish and maintain supportive relationships, and make responsible and caring decisions.”

Abby Beatrice Dunn, a Greenwood resident and former educator, told the committee that  the materials advisory committee is unnecessary because there are already existing committees to decide on classroom materials and it would give more hoops for educators to jump through.

But Dunn supports the bill because she has heard concern from parents in her community about schools teaching CRT. Dunn said the schools call the lessons “transformative SEL” or “radical progressive SEL” instead.

The bill allows parents to opt their children out of classes or lessons involving SEL.

Cara Cecil, a Center Grove parent, said she removes her child from school once a week for 50 minutes while the school is teaching SEL.

Sen. Eddie Melton, D-Gary, said that when Attorney General Todd Rokita released the Parents’ Bill of Rights mentioning CRT, the Senate Democratic Caucus asked the Indiana Department of Education if CRT was being taught in Indiana schools. IDOE said no Indiana schools were teaching CRT, according to Melton.

Tilly Robinson, a senior high school student at Bloomington South High School, said her school system revamped the curriculum in 2018. The curriculum initially addressed the history of slavery in a racist and misleading way, she said.

“However, while I believe it does not fall into the definition of SEL, I do believe it's important for teachers to expose us to thinking about social injustice and how we can fight for justice,” Robinson said. “That does not entail indoctrinating students with an ideological agenda.”

When asked by Melton if she has been made by these classes to feel bad about her skin color or historical events as a white person, Robinson said she has not.

Many educators and education advocates said the threat of lawsuits or action from school corporations would prevent educators from discussing difficult issues or current events that involve the identities listed for fear of pushback from parents.

Ben Yoder, a middle school music and drama teacher at Hamilton Southeastern, said the need to publish all classroom materials online could require districts to hire extra administrative assistants for each building. He estimated it could cost the district $1.32 million.

Yoder said he and other educators see the bill as questioning their judgment.

“This bill on its face says to me that you, the Senate, do not trust me to use my professional judgment in the classroom,” Yoder said.

Bob Taylor, the executive director of Indiana Public Schools Superintendents, said that the requirement to post lesson plans online may punish teachers from deviating from lesson plans to discuss current events or have impromptu teachable moments. Instead, he suggested teachers make syllabi public.

Baldwin acknowledged that the bill would create more work for educators, a fact that was reiterated several times during testimony.

Most legislators and testifiers agreed that having more parent and community involvement in schools is a good aim. But many took issue with other parts of the hefty bill as it could limit the freedom of educators and harm the already declining number of teachers in the state.

Gail Zeheralis, public policy and affairs specialist of the Indiana State Teachers Association, came to testify in opposition to SB 167 on behalf of her organization.

“ISTA believes that professional academic freedom is essential to the teaching profession,” Zeheralis said. “It further states that controversial issues are to be a part of instructional programs when judgment of the professional staff deems the issues appropriate to the curriculum and to the maturity level and students.”

Justin Ohlemiller, executive director of Stand for Children Indiana, a nonprofit education advocacy group, gave testimony at the committee meeting. Ohlemiller said the group supports the idea of having a curricular advisory committee, but the bill could have the unintended consequences of preventing discussions of race and racism, causing teachers to leave the field, creating an unfunded mandate and preventing students from getting necessary mental health help.

The bill requires students to opt in to counseling and health services. One high school student told a personal anecdote of a friend telling her parents she wanted to seek help for mental health issues, but she was turned down. This could lead students to hurt themselves or others, she said.

The changes the curricular advisory committee may make could conflict with Indiana Department of Education standards, along with advanced placement and dual credit classes. For these courses, students would have the choice to opt out of classes or lesson plans, according to Baldwin. Melton said state funding may be affected if the bill removes any requirements from IDOE.

Melton, a Black legislator, said while the bill aims to prevent divisiveness between students, his children feel divided any time they step into their predominantly white school.

“Just because a part of my history makes you uncomfortable doesn’t mean we shouldn’t talk about it,” Melton said.

Baldwin argued that historical injustices would be taught, but he would want these issues to be taught in a way that is neutral and does not tell students how they should feel about the events.

Sen. Fady Qaddoura, D-Indianapolis, suggested that the committee form a task force to study the issue due to Baldwin’s uncertainty on what the effects of the bill could be.

One unintended consequence, Qaddoura said, could be the inclusion of national origin in the bill. Because schools would be discouraged from associating feelings with national origin, the daily repeating of the Pledge of Allegiance could be an issue with the way the bill is currently written, he said.

“I prefer that we stop and get it done right before we move forward,” Qaddoura said.

The bill did not receive a vote at this first committee meeting.

Taylor Wooten is a reporter for TheStatehouseFile.com, a news website powered by Franklin College journalism students.