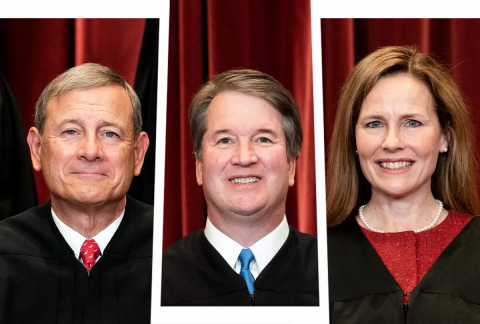 At the stroke of midnight on Wednesday, the Supreme Court suddenly overturned Roe v. Wade.

The move was quiet and it very well may be temporary (they could still issue a short decision any minute now, or not) but make no mistake, a Roe overturn is exactly what it is. But headlines across the country aren't coming right out and saying so, because the Supreme Court used a dastardly legal manipulation to let states ban abortion without actually issuing a straightforward decision to end abortion protections.

Earlier this summer, Texas passed a law banning abortion at 6 weeks. Six weeks may sound like a luxurious amount of time to make a decision, but in fact, it amounts to a near-ban on all abortion. That's because in reality, "six weeks" is only two weeks after the missed period, and that's only in women who have highly regular periods. Critically, it is also before many doctors will even do the procedure, for safety reasons. So it's estimated that 85-90% of abortions in Texas are performed after the 6-week mark.

To make it worse, the law is written in such a way as to make wife beaters, Aunt Lydias, and embittered incels the primary enforcers of the ban, establishing what amounts to a public bounty hunter system. As legal analyst Imani Gandy explained at Rewire News Group, the law "allows anyone—literally anyone, including strangers!—to file a lawsuit against a person they suspect is going to either provide an abortion or help a person obtain an abortion." This means that not only can the abusive ex-boyfriend sue the doctor who helped his victim escape his clutches, but he can now also go after the friend who put her up and paid for her abortion.

As The 19th reports, Planned Parenthood and other clinics across the state have already mass-canceled abortion appointments.

This Texas law clearly violates Roe v. Wade, the landmark Supreme Court decision that bars states from banning pre-viability abortion, a category which very much includes pregnancies two weeks after a missed period. And yet, somehow the Fifth Circuit Court, which is notoriously authoritarian, found a way to uphold the law. The law went into effect at the stroke of midnight on September 1, as the Supreme Court passively allowed that lower court decision to stand. The move, or lack thereof, is unprofessional and cowardly, but it did allow the far-right court to have it both ways by banning abortion in Republican-controlled states without drawing "Roe overturned" headlines that would anger the large majority of Americans who want to keep Roe in place.

Unfortunately, such a shadowy maneuver is hardly a unique move for this court. These kinds of passive, backdoor decisions are increasingly how the Supreme Court is now doing business. Despite the self-flattery from the legal world about the apolitical nature of the courts, the reality is today's Supreme Court is both very political and very right-wing.

It is not hyperbole to say that the GOP has spent years shaping not just the Supreme Court but the entire federal judiciary to force a far-right ideology on a public that keeps rejecting it at the ballot box. The problem for Republicans, however, is that dramatic Supreme Court decisions overturning Roe or otherwise gutting hard-earned human rights would anger voters. That could drive up turnout for Democrats in elections and hurt elected Republicans. The court's behavior suggests a clash between a yearning to push the country as far to the right as possible and a political need to avoid backlash.

One way they've squared that circle is by gradually chipping away at laws like the Voting Rights Act, so they can destroy human rights quietly without drawing the attention outright annihilation would bring. But the newest innovation is abusing the so-called shadow docket.

As Igor Derysh reported for Salon, the shadow docket is "where the justices hand down largely unsigned short opinions without going through standard hearings, deliberations, and transparency." Traditionally, it's mostly upholding lower court orders or emergency petitions that aren't especially controversial. But this court, controlled by Chief Justice John Roberts, has started to use the shadow docket to issue far-right rulings under the radar, avoiding the press coverage that more traditional rulings get. That's how, for instance, the Supreme Court dispensed with the eviction ban that President Joe Biden was implementing to prevent a surge of pandemic-caused homelessness. It's also how the Supreme Court forced the Biden White House to enforce the racist "remain in Mexico" policy regarding political asylum seekers. As Moira Donegan at The Guardian explains, this sleazy strategy for cheating the legal system was developed under Donald Trump.

Previously, shadow docket emergency requests had been rarely used, to advance the interests of the governing administration. From 2001 through 2016, the Department of Justice applied for these emergency relief interventions from the court only eight times. During the four years of Trump's presidency, however, the justice department applied 41 times.....

Bypassing lower courts, the Trump administration was able to solicit the supreme court for a green light for border wall funding and construction, for a ban of transgender troops in the military, for a ban of immigrants from Muslim majority countries, and for many, many executions during the administration's 11th-hour killing spree in the latter half of 2020.

Unfortunately, this strategy has been devastatingly effective at lulling the press into not covering how far-right the Supreme Court is, and therefore tricking the public into believing the courts are more reasonable than they actually are:

This Roe non-decision advances the court's cowardly strategy a step further. By not saying anything at all, they allow the Texas law to go in effect without drawing headlines that indicate that Supreme Court decision was made one way or another.

From a journalist's perspective, I can say that this method, while sordid, is effective for media manipulation. Outlets cannot publish straightforward headlines that say "Roe overturned" or "Supreme Court upholds Texas abortion ban," because it hasn't actually happened, one way or another. It's possible that a decision is issued later today or this week, or never. There's no way to know and so no way to write clear, compelling headlines, much less stories that state clearly, one way or another, if Roe is overturned. It's Schrödinger's abortion ban.

Except, of course, for the women who actually need abortions. For them, these legal ambiguities are irrelevant, because the situation is black-and-white: They need abortions, but are barred legally from getting them. If they can't figure out ways to get abortions on the black market or out of state, they may end up being forced into childbirth. While headline writers are stuck trying to explain this to the public, pregnant people themselves are very much non-ambiguously in crisis.

What makes the non-decision even more repugnant is that the Supreme Court is due to hear arguments next month in Dobbs v. Jackson Women's Health Organization, which involves a 15-week abortion ban in Mississippi. That ban may sound less serious than the Texas ban, but it is also an invitation to the Supreme Court to overturn Roe, since it's an attack on the pre-viability standard. Mississippi's lawyers have even made it clear that overturning Roe is the point of the law.

That's why, even if the Supreme Court accedes to public outrage over this cowardly Roe overturn, and issues a too-late injunction against the Texas law, a lot of damage has been done by not swiftly enjoining a law so clearly in violation of Roe. Legal analysts Jessica Mason Pieklo at Rewire and Steven Mazie at The Economist explained on Twitter: