New Indiana law is meant to protect free speech at universities. It may do the opposite. 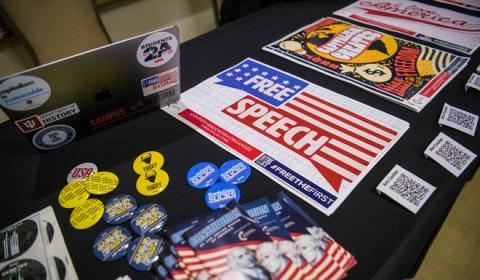 Prior to its slightly fiery conclusion, the student action against Coulter's appearance at Indiana University early this month was relatively restrained. There were no protesters picketing outside the event. The nearby sidewalk's chalk work, sporting "Racist gathering" in bright pink letters with an arrow pointing toward the IMU, was the only prominent sign in the surrounding area. During Coulter's speech on the history of conservatism, the crowd's interruptions were sparse and far between.

It was only during the event's Q&A portion, when Coulter said Layous was taking too long to ask a question, that the mood shifted.

After a brief back and forth with a few audience members, Coulter left the stage. When asked why she was in such a hurry to shuffle along questions, Coulter responded she had a plane to catch. She noted the event, which was scheduled for 60 minutes, had already run over its allotted time.

Coulter later tweeted the event was "the funnest (sic) event I've done since COVID," with many questions from "the liberals, who were perfectly polite" until Layous' turn.

Immediately following the event, Layous, a senior at IU, told The Herald-Times she didn't come to the event as a protester. Layous said she didn't intend to prompt Coulter to leave and was disappointed the people after her didn't get to ask their own questions.

While Layous said she can't speak on whether free speech at Indiana University is protected as a whole, "I don't think it was (protected) today."


That's something state lawmakers sought to change during the most recent session of the Indiana General Assembly. Legislators intensified free speech protection on college campuses by passing House Bill 1190, which was later signed into law by Gov. Eric Holcomb.

Under this legislation, universities must create and publish clear policies on free speech rights and protections for students, faculty members and staff. Universities cannot prohibit protected expressive activities at an outdoor, accessible area on campus, though they can enforce restrictions on the time, place and manner.

The new law also requires universities to submit an annual report of complaints to a higher education commission. If a student or student organization claims their right to free speech has been violated on campus, they can seek legal action, which could grant them up to $50,000, court costs and attorney's fees.

While the new law's stated purpose is to better protect speech, some have questioned whether its fine print will preserve or hinder a person's constitutional rights.

"The statute, whatever the intent of it might be, might actually chill protected speech instead of protect speech," said Joseph Tomain, a lecturer at IU's Maurer School of Law.

The legislation has drawn negative reactions from some IU faculty members, including Tomain. He describes himself as a fierce protector of free speech and has dedicated his time both as a lawyer and educator to the topic.

"It's better to have some false speech be protected than it is to risk having truthful speech be unprotected. There is a cost to the United States' strong free speech protections, but ultimately, I think it's a cost worth paying in order to ensure that we have a functional democracy," Tomain said, noting that democracies work best when there's a free marketplace of ideas.

There are some aspects of the new law Tomain appreciates, such as requiring universities to have accessible free speech policies and attempting to bar counter-protesters from using a "heckler's veto," which happens when a person or group who disagrees with a speaker's message is able to silence them through disruptive intervention.


Those positives aside, Tomain said he has some issues with the bill's language.

For example, the law defines "harassment" as speech or conduct that is unwelcome, severe, pervasive and "subjectively and objectively offensive" and results in a student being denied equal access to educational opportunities or benefits provided by the institution.

"The definition of harassment is most likely in violation of the First Amendment," Tomain said. According to Tomain, the First Amendment protects speech that is unwelcome, severe and pervasive while also noting "offensive" is too subjective to be used in this context.

The legislation also prohibits universities from requiring leaders or members of a student organization to comply with that organization's beliefs or standard of conduct.

"Once you start to put these kind of limits, these requirements that anybody can join any organization, that could be a unconstitutional interference with freedom of association," Tomain said.

Under the First Amendment's freedom of association, an organization can accept or decline membership based on certain criteria.

Tomain isn't the only one who has voiced reservations about the law. Speaking with Indiana education-focused publication Chalkbeat, Sheila Kennedy, a professor emeritus of law and public policy at IUPUI's Paul H. O’Neill School of Public and Environmental Affairs, said the legislation could encourage additional litigation and complicate the legal precedent of the First Amendment.

Tomain also took issue with the law's granting of legal proceedings if a student or student organization feels their right to free speech has been violated.

"The remedial provision here has the potential to chill speech if people start to be afraid that they're going to be sued, and not only have to pay for their own lawyers, but also potentially pay for the lawyers of the other side and the court costs," Tomain said.

While the statute explicitly states the university would cover the plaintiff's attorney fees if proven to be at fault, the statute does not limit who can be sued, according to Tomain.

While constitutional rights are protected against federal or state infringement, such as police, schools or Congress, Tomain noted it's possible for claims of free speech violations to be brought against private citizens or groups.

"I'm not certain that this is the best way to protect free speech," Tomain said.

IU's free speech policy is posted online at freespeech.iu.edu. The webpage features a note about campus diversity as well as a separate page answering frequently asked questions. Students can also contact faculty members who are considered experts on the First Amendment.

IU spokesman Chuck Carney said the webpage has been up for several years and was created after IU students began asking similar questions about their rights on campus.

"We wanted to have a central location to point people to in case they had questions," Carney said.


Since 2017, IU has enlisted the Demonstration Response and Safety Team, which includes volunteer faculty members and student affairs professionals, to attend demonstrations, rallies and protests held on campus.

At least two team members try to be at any demonstration on campus. The team members are passive observers who are there to answer any questions about a person's rights to free speech. They also ensure there are no disruptions, such as a heckler's veto, that prevent freedom of expression.

DRST is currently led by Kathy Adams Riester, associate vice provost for student affairs and executive associate dean of students, and Katie Paulin, assistant dean for student support and outreach. John Summerlot, the university coordinator of military and veteran services, previously led the team and still acts as a volunteer.

According to Summerlot, the team's formation was inspired by political scientist Charles Murray's controversial visit to IU's campus in April 2017. Murray, who identifies as a libertarian, has been accused of promoting racist views.

"We didn't have anybody versed in freedom of speech on campus," Summerlot noted.

According to Carney, IU was ultimately supportive of the new law.

"We felt like this was something that we certainly were comfortable with, because we knew that we were already implementing many of the things that were put in place," Carney said.

Though the law could conceivably be challenged in court later on, it is currently in place for universities in Indiana.