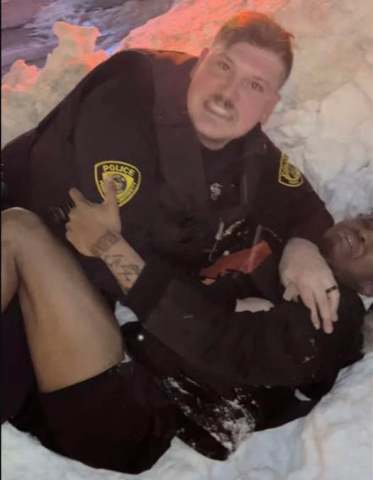 The junior in the College of Health and Human Sciences was arrested for resisting law enforcement, according to Purdue police logs, but he says he didn't resist.

In a video taken by his girlfriend, Tuggle struggles in the snow, while officer Jon Selke holds his forearm over Tuggle’s neck and face. It’s unclear from the video how much pressure Selke uses.

“Stop,” Tuggle’s girlfriend, who contacted The Exponent and asked not to be identified, is heard screaming in the video. “Get off of him! Get off of him!”

Tuggle said the police were called on him and his girlfriend about 8 p.m. Friday during an argument they had near the veterinary hospital on the south side of campus. He said he and his girlfriend were were driving home from the Co-Rec when they pulled over near the hospital and got out of their car, still arguing.

Police were called on scene by a bystander because of a “domestic disturbance of a couple arguing during a breakup,” police spokesperson Capt. Song Kang said. Tuggle said he saw a black truck pull over and park in the area; he assumes the driver is who called police.

Selke arrived about two minutes later and tried to separate parties to figure out what was happening, Kang said.

“He didn’t follow instructions,” he said. “It was a simple resisting case.”

Tuggle said he wasn’t resisting arrest, but instead, Selke screamed at him to “get away from the car.”

“I tried to explain to him, ‘Nothing’s going on,’” Tuggle said Wednesday. “‘I'm not attacking her. This is my girlfriend. We're having an argument.’”

He then turned to his girlfriend and asked her to explain that to the officer, but before she could say anything, Selke allegedly interrupted.

“He screamed at her, ‘Shut the fuck up and back up!’” Tuggle said. And that’s when he said he got between the cop and his girlfriend and told him, “There's no need to be disrespectful.”

While Tuggle says he can’t remember what exactly happened next, he recalls Selke screaming, “All right buddy, you're going down,” and then throwing him against his girlfriend’s truck.

Selke allegedly punched Tuggle in the face as he tried to get on top of him.

“I was like 'what the hell,'” he said, when Selke punched and elbowed him in the face.

Tuggle was listed in the Tippecanoe County Jail logs as 6 feet tall and 180 pounds.

Tuggle said he struggled, while Selke pushed him up against the truck, until they slipped and fell into the snow. While struggling, Tuggle asked his girlfriend to start filming, which is when the video starts.

In the video, Selke holds his forearm over Tuggle’s face and neck, while Tuggle screams, “Please get off me!”

When Tuggle's girlfriend touched the officer, trying to get Selke off Tuggle, Selke said, “Touch me again, and I will tase you."

Tuggle said after backup arrived, one officer restrained his legs while another grabbed his arms. It was only after the other officers arrived that Selke got off Tuggle.

Upon further questioning, Kang said he didn’t have all the details about the conversation between the officers and Tuggle.

Kang also said he couldn't comment on the video because he hadn’t seen it. When an Exponent reporter offered to show Kang the video on their phone he said, “I don’t know whether or not that’s going to have value. I don’t want to be biased either way.”

Kang declined to let reporters review body camera footage, saying that a request must be made to the Office of Legal Counsel. Tuggle also did not receive body cam footage when he asked police for it.

"Purdue University police became aware Friday night of an incident that occurred that evening involving a Purdue police officer who responded to an urgent call from a third party following our 'see something, say something' campus safety guidance," a Wednesday night statement from PUPD Chief John Cox reads. "The caller stated that it appeared a woman was being held against her will near Horticulture Drive."

Kang said the case is still an active investigation, and he didn’t give any further details. He referred The Exponent to Purdue spokesperson Tim Doty.

“Any time a PUPD officer uses force in connection with an arrest, the department conducts an internal review,” Cox said. “PUPD commenced that review, led by Deputy Chief Lesley Wiete, immediately upon receiving the officer’s report on Friday night.

“That investigation will, under PUPD General Orders, include input from all witnesses to the arrest and take into account all available evidence, including video from officers’ body-worn cameras and statements from the students involved.”

Doty responded to The Exponent with the same statement.

"Purdue police take incidents such as this seriously. The video from body-worn cameras will be made available, as will all findings and evidence from the internal review when complete," the statement reads.

Tuggle was booked in Tippecanoe County Jail after the altercation, on a preliminary charge of resisting law enforcement, according to jail logs.

His knees were left scraped, and his face was red and puffy after the altercation, he said.

He said he didn’t report the alleged misconduct when he was released because people had told him to “not trust the police and not to go back in there.” He went to the Black Cultural Center on Tuesday, where he asked if there was any action he could take against the officer.

Tuggle said Gates, the vice provost of diversity and inclusion, called him on Wednesday afternoon to let him know an internal investigation conducted by PUPD found that “they saw no probable cause and no wrongdoing on the officer’s end.”

Gates told him to “do what he felt was necessary” with the information from the police, and that’s when Tuggle started posting the video and his story to social media.

The video has been shared in multiple group chats across GroupMe, Instagram, Reddit and TikTok, and it has garnered thousands of likes and comments since Wednesday night.

A town hall meeting has been organized for 7 p.m. Thursday at Lily Hall in room 105.