'Sometimes to Tell the Truth, You Have to Take a Stand' 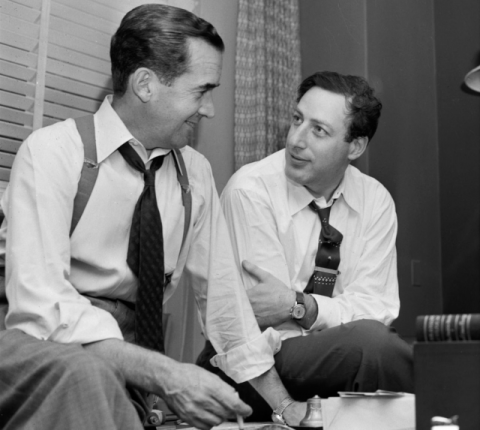 I have a story I want to share with my fellow journalists. It’s essence is: sometimes telling the truth requires taking a stand (though it must be done rarely and carefully) and neutrality is not necessarily objectivity.

In my first broadcast news class at Columbia University’s Graduate School of Journalism in the late 1970s, our instructor was the legendary Fred Friendly, producer for Edward R. Murrow and former president of CBS News. Professor Friendly showed the class a television news report on a new weapon America had deployed for its war in Vietnam. The weapon was an anti-personnel bomb filled with three-inch nails. When exploded, an area the size of a football field would be hit with the nails every six or so inches.  The idea was to severely maim, but not kill the enemy. A crippled soldier requires greater resources, typically four or five persons to take care of him or her.

For this report, the US Army demonstrated the weapon on an inch-thick piece of wood, which a couple of dozen nails easily ripped into.

Friendly asked for the students’ reaction to the story. My classmates complimented the writing, the visuals, and the subtlety of the story.  Then it was my turn.  As a former activist who had organized opposition to the Vietnam War, I was torn. I had received a small fellowship to attend Columbia and was concerned that if I said what I felt, I might jeopardize my standing in this prestigious school.  Then I said to myself, “F–k it.”

Out loud I said, “If it were me, I would have shown what that weapon does to bodies — what it does to human beings and not just a piece of wood.”

My classmates all attacked me. Even my best friend said that I was not being objective and was biased. I responded, “So if you were covering the concentration camps in Nazi Germany, you would not have shown the piled-up dead bodies of the victims, only artistic shots of swinging gas chamber doors?”

I yelled, “Why? Because these victims are Asian and not white?”

They yelled back, “Come on. That’s ridiculous.” The entire class of mainly white, two Black, and one Latino student disagreed with me. The yelling went back and forth until one student called me, “dangerous,” because I was clearly not “objective.”

There was silence and then a pause. The class turned to Professor Friendly. At first, he said nothing. Then quietly, which was an unusual volume for him, he said, “If Ed Murrow were here today (at this point, I expected him to say that Murrow would kick me out of the school), he would have backed Ti-Hua.”

The class and I were all stunned. He continued, “Sometimes to tell the truth you have to take a stand. Sometimes there is only one side to a story.”

The next day Friendly called me into his office and in a booming voice said to me, “What you learned yesterday is the most important thing you will learn at Columbia. But you’ll get fired a lot in your career.” I remember thinking, “What does he know, this old man?” Of course, he was right.

Several decades later I understood why he was so quiet that day in class. Late one night, after working a night shift for a local New York television station, I watched Good Night, and Good Luck, the George Clooney movie about Murrow and Friendly. The movie detailed how Murrow and Friendly excoriated Senator Joe McCarthy on their CBS program, “See It Now.”

McCarthy had destroyed so many lives in the 1950s with his communist-under-every-rock campaign of lies. After saving America from this demagogue, Murrow and Friendly eventually got fired. Their sponsor, ALCOA (Aluminum Company of America), withdrew its funding for “See it Now.” CBS then cut the number of the program’s episodes and moved it to a little watched time slot. Murrow was reduced to doing primarily entertainment stories on another program. The greatest broadcast journalist of all time eventually left CBS News after arguing with the network’s founder, William Paley. Paley reportedly told Murrow he was tired of the “headaches” Murrow’s stories caused.

It was an epiphany for me. I wanted to scream out, “That’s why he got so quiet!” But my wife and kids were sleeping, so I didn’t. I realized what Friendly saw in my argument with my Columbia classmates was a microcosm of what he and Murrow had endured, and it refreshed a bitter memory. He knew I would get my butt kicked by many of my bosses. He was right. I have been laid off seven times out of 11 broadcast journalism jobs. By my probably biased estimation, four times were for reporting the truth.

Friendly gave me a hard time at Columbia. A big bear of a man with a loud, obnoxious voice (and by then sporting a potbelly and bald head looking nothing like George Clooney) he was always pushing me to do more. But I was surprised when he kept using my stories, even leading one election-night review with my radio piece. And years later I was delighted to learn that his wife recognized my name, indicating Friendly must have told her about me.

What does this have to do with today?

For the past two years under President Trump (and not in his first two years of office), I have referred to him as a racist and a sexist. Now I call him an American fascist, who attempted a coup to stay in power and overthrow democracy. It is our duty as journalists to be honest purveyors of information. There is only one side to the January 6th storming of the US Capitol, only one truth. It was, at the very least, an attempt to subvert democracy and an act of sedition and insurrection.  It was not merely a riot or takeover, euphemistic terms used by some news media, though, thankfully, not all.

Of course, we cannot always know or tell the truth, especially when reporting the day of an event. When news is breaking, we may only have enough time and knowledge to report both sides. To take a stand, we must prepare thoroughly and be aware of our own biases, which can cloud our judgment. That’s the reason I did not label Trump in his first two years of office.

Decades after Murrow’s McCarthy takedown, Friendly admitted that “[i]f Ed were here, he would tell you that we were a year late doing the McCarthy program. It was the only time in his whole life when he preached.”

Our job as journalists is to tell as close to the truth as humanly possible, and when the facts are abundantly clear, there are times we have to take a stand on an issue in order to do that.

Ti-Hua Chang is an award-winning investigative reporter and is The Young Turks investigative reporter on climate change. Chang is the recipient of numerous awards, including a Peabody Award, the New York Press Club award, and the Edward R. Murrow Award. Chang was both a national and local New York Board member of the Asian American Journalists Association, which gave him a Lifetime Achievement Award in 2015.