Purdue, do the right thing and mandate the COVID-19 vaccine 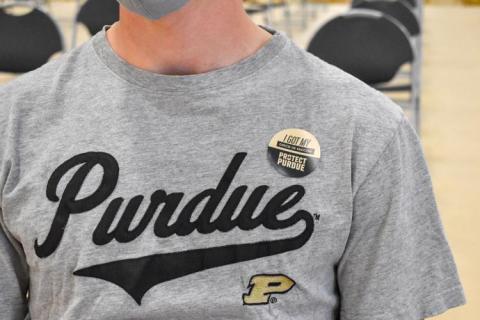 In late July, a federal judge upheld Indiana University’s COVID-19 vaccine mandate for all students, faculty and staff, save for medical and religious exemptions. In the court opinion, Judge Damon R. Leichty emphasized the safety and efficacy of COVID-19 vaccines and affirmed IU’s legal authority as a public university to mandate them.

“Progress has been made because of the vaccine, not despite it,” Leichty wrote. “To the extent that lingering medical and scientific debate remain on this record, the court remains resolved that Indiana University has acted reasonably here in pursuing public health and safety for its campus communities.”

So what is Purdue waiting for?

Make no mistakes. We are nowhere near the end of this pandemic. Cases and hospitalization are again sharply on the rise thanks to the far more contagious delta variant raging among the unvaccinated. State and local officials around the country rushed to restore indoor mask mandates as a result. According to the Indiana State Department of Health, only 49% of the Tippecanoe County residents are fully vaccinated. Meanwhile, Purdue’s vaccination rate continues to lag behind its Big Ten counterparts, especially those that mandated the vaccine. Protect Purdue’s latest update says 75% of all students, faculty and staff have submitted proof of vaccination, compared with University of Maryland’s 92.3% and Rutgers University’s projected 100%. Both Purdue’s and the county’s vaccination rate fall below the numbers estimated to achieve herd immunity.

A recent Yale study found that a college campus can resume full operation with minimal social distancing and testing requirements if 90 percent of the population is vaccinated. One of the authors, Dr. A. David Paltiel, went so far as to tell the New York Times that not requiring the vaccine amounts to a dereliction of duty: “It really comes down to whether they have any business opening their doors.”

As of Boiler Gold Rush week, Purdue’s COVID-19 policy remains a mishmash of mask mandate and differing testing and quarantine protocols based on vaccination status. Instead of mandating the vaccine and reallocating vital resources from a weekly testing system — the elimination of routine testing is projected to save IU more than $10 million — Purdue opted for publicity stunts. The Old Golden Ticket Drawing was announced during summer, where 10 students who submitted proof of vaccination are drawn at random to receive $9,992 and a similar program created for faculty and staff. Unfortunately for Purdue, the nonstop media blitz promoting the event with flashy, reality TV show-like video clips does not change the unpleasant truth: a negligible chance at a lottery is not going to change anybody’s mind.

But regardless of how important the vaccine is in ending our collective misery, Purdue appears to believe it doesn’t have an obligation to make sure the shots go into as many arms and as quickly as possible. Time and again university officials characterize getting a vaccine as a “personal choice,” seemingly ignoring the fact that Purdue mandated the flu shot last year as part of its pandemic response in addition to half a dozen decade-old state immunization requirements. We now have a minimal chance of catching measles, mumps or rubella not because of daily health precautions or routine testing, but because vaccine mandates from public institutions like Purdue made mass inoculation possible.

It seems ironic that Purdue recently adopted its first-ever civics literacy graduation requirement, which supposedly graduates informed and responsible citizens, but then abandoned its own civic duties with inaction in the middle of a pandemic. University officials and experts who mandated civics knowledge cannot possibly believe that they don’t have the responsibility or power to mandate a vaccine, or that students don’t have a civic responsibility to protect themselves and others. Responsibility is not a choice; one cannot pick and choose which responsibility to fulfill based on “personal choice.”

In times of unprecedented crisis, it is of the utmost importance and urgency for the administration to take action. Purdue has demonstrated beyond a shadow of doubt that it has the will and resources to require a vaccine on the fly and ensure student compliance with the flu shot mandate last year. The question now is whether university officials have that Purdue “grit” they have long been advocating for to not put the fear of political backlash or wrath of big donors above the well-being of this community. If Mitch Daniels is sincere about doing everything he can to get Purdue through this pandemic, then he should do the obvious: joining forces with over 500 colleges and universities to mandate the COVID-19 vaccine.