Not Far From Bessemer, Over a Thousand Alabama Coal Miners Are on Strike 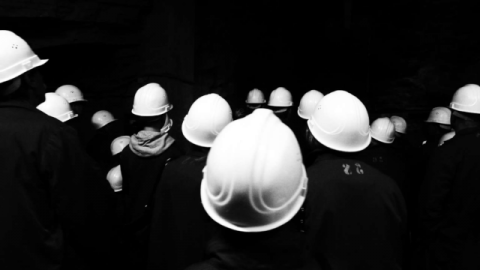 At 10:30 p.m. on Thursday, just as the night shift started, 1,100 miners at the Warrior Met mines in Brookwood, Alabama officially went on strike. With the bosses refusing to come to the bargaining table in good faith, the workers are shutting down operations at all of Warrior Met’s mines and facilities to demand a better contract and an end to the company’s unfair labor practices.

Left Voice went to the picket lines at the moment the strike began to speak with the workers waging this inspiring fight. Just days before, we were covering the Amazon unionization drive in Bessemer, about 30 minutes away from the mines. We were on our way back to New York when we heard about the strike at Warrior Met. We turned the car around and went back to support this struggle and to amplify the voices of the workers putting their livelihoods on the line to fight for what they know they deserve.

Warrior Met stretches for miles upon miles of winding back roads in Brookwood — the facilities include every part of the mining process, from cleaning to mining to maintenance to training new miners. Workers at every point are on strike, standing united against a company that is happy to put their lives at risk in order to turn immense profits. They are demanding a new contract that will increase wages and offer workers urgently-needed health insurance and other benefits.

This is the first contract that the union will have negotiated in the five years since the mine declared bankruptcy and Warrior Met bought out the previous owner, Walter Energy, in 2016. The contract the bosses crafted at that time significantly cut the workers’ wages and benefits, including their pensions; the workers were forced to accept it or risk losing their jobs as a result of the buyout. But since then, due solely to the labor of the workers, the company has shipped out even more coal and raked in record profits over the last five years. They even managed to turn a profit in 2020 after forcing the state to classify the miners as essential in order to keep the mines open. Nevertheless, the new contract the bosses are offering today actually aims to lower wages and make further cuts to protections and benefits.

The workers are justifiably disgusted by the bosses’ maneuvers, and it shows. Many of them remember what working conditions were like before Warrior Met took control. An older worker tells us that he made more in 2009 than he does now in 2021. “It’s like we’re just numbers to them,” another worker tells us, shaking his head. He explains that management rakes in million-dollar salaries and bonuses each year while they tell the workers putting their bodies on the line each day that they can’t pay them any more. CEO Walter J. Scheller III made $4,007,049, $1,225,091 of which was made up of bonuses. These miners work six, sometimes seven days a week on 12-hour shifts, just to make ends meet. Miles, one of the miners, tells us that he works anywhere from 155 to 170 hours every two weeks.

Nearly every worker who speaks to us tells us that the hours are insufferable. They’re at the mine from sun up to sun down, with little time to spend with their families or do anything but rest up for their next shift. Some of them commute upwards of 70 miles to get to work and another 70 miles to get back home. As Miles tells us, “I have a four year old daughter, love of my life, and I’ve been with the company five years now. I come off the road and went to work for her here, and I’ve missed her everything. I live at the mine. All we’re demanding is what everyone else is getting: a share of, a piece of the pie. We just want our piece.”

The contract the miners have now offers a pitiful amount of paid time off and just three guaranteed holidays a year: Christmas Eve, Christmas Day, and Thanksgiving. The rest of their days off are taken as “floating holidays.” So while their families are gathered to celebrate, the Warrior Met workers are hundreds of feet below ground, forced to take a day off some other time, if they’re allowed to take off at all — all so that the mines stay open, the coal keeps flowing, and the bosses’ profits keep growing.

As if this were not enough, even with the union these jobs are precarious. The miners work on a “four strike” policy, which means that if they miss four days of work within 15 weeks, they are automatically fired. It doesn’t matter why — even a doctor’s note doesn’t suffice to excuse them from their shift. One worker told us that when he had to stay home to take care of an urgently ill family member, he still got saddled with a strike on his record. He said that if it weren’t for the union, he would have been fired a long time ago.

The four-strike policy even extends to injuries incurred on the job. One worker tells us the story of a coworker who got badly hurt in the mine and was taken to the hospital for stitches; after he was released from the hospital, his boss forced him to go back to work or risk another strike on his record. But this is commonplace; nearly all the workers at the mines — some who have worked there for nearly thirty years and others who have worked there for just seven weeks — have story after story of workplace injuries.

And it’s no wonder: they perform some of the highest-risk jobs around. The Warrior Met mines are two of the deepest vertical shaft coal mines in North America. These miners work 2,000 feet below the ground day after day. The mines also produce a significant quantity of methane gas; this makes them valuable for profit-hungry natural gas speculators, but also more dangerous for the miners. In 2001, thirteen miners were killed in a huge gas explosion. A couple of the workers we spoke to remember the event and the coworkers they lost. They say the company was aware at that time that working conditions were deadly, but after the explosion, not much has changed.

These miners know that they do some of the most dangerous work in the country — and they also know they aren’t being fairly compensated for the risks they take six days a week, 8-12 hours a day. Full of emotion, an older worker speaks about the conditions in the mines and the role the union has played in keeping the miners safe. “We fought for our rights. Because the place we work in is a dangerous place. The union backs us … if it wasn’t for them, that would be a death house. It is a death house.”

The workers at Warrior Met tell us again and again that they aren’t asking for anything but what they deserve: they want a living wage, benefits, and an end to the company’s deathly and exploitative labor practices. But they also know that management doesn’t care about their jobs or their lives — if they don’t stand up for their rights now, the company will just continue with attack after attack until the workers have nothing left. That’s why this contract is so important and why the workers are carrying out this strike. And that’s why they have pledged to continue until their demands are met, even as management does everything it can to break the strike. The workers tell us that the company is getting ready to hire scabs, and has already called in private (and armed) security guards and even Alabama state troopers to patrol the grounds.

Even with the stories of life in the mines and a difficult struggle ahead, the workers are beginning this strike with high spirits and a remarkable sense of unity. Every single worker welcomed us and wanted to share their story. For many of them, this is their first strike, but they come from a long tradition of militant miners. “Everything … all this was all built on mining. This is not something that just popped up, this has been mining over generations. All of our fathers and grandfathers grew up, we grew up with mines, you know,” Miles tells us. Even though all the coal mined there is exported to other places, the community of Brookwood is sustained by the Warrior Met mines and the workers who spend their days and nights working there. The workers know that they have the solidarity of their community in this fight.

They also know they are united in their fight. Worker after worker tells us that they feel like they can win because they’re standing up to Warrior Met together. Workers who have been at the mines for seven months are striking alongside workers who have been there for over 30 years. As one young miner told us, “We got a lot of experienced miners over here, they’ve been here 10+ years, 20+ years, some of them. They got to experience [when conditions were better], and that’s why they’re out here, striking with us.” With that, they are prepared to stay on the picket lines for as long as it takes to reach a fair contract and to win their demands.

The strike at Warrior Met begins as the final results are being tallied for the Amazon union drive in Bessemer. All eyes are on Alabama at this moment as it becomes the epicenter of labor struggle in the United States. Success in these struggles will — and have already — encourage other sectors to fight against the attacks of the bosses and their representatives. From Amazon to Warrior Met, workers are waking up to the fact that they are essential and that the bosses quite literally profit off of their lives. Victories in these struggles will be invaluable examples of how the working class can rely on its own strength to fight back and fight for even a small portion of what it deserves. Solidarity with the miners strike!