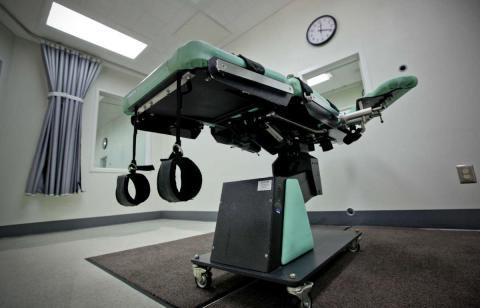 Officials from San Quentin State Prison in California display the prison's lethal injection facility in 2010. California recently placed a moratorium on capital punishment, but other states are moving in the opposite direction, pursuing methods such as gas chambers and firing squads.

In what activists warn could be the first in a spike of executions this year, Matthew Reeves and Donald Anthony Grant were killed via lethal injection by the states of Alabama and Oklahoma respectively on Thursday, just one month before a constitutional challenge to Oklahoma’s lethal injection protocol goes to trial.

The Supreme Court denied an application to stay Grant’s execution on Wednesday, a move overshadowed by the news that Justice Stephen Breyer plans to retire. Reeves’s life was in the high court’s hands Thursday as President Joe Biden began the process of selecting a nominee to succeed Breyer, but the justices reversed lower court rulings to allow the execution to proceed in a split 5-4 decision. The state of Alabama killed Reeves in Holman prison after the legal wrangling ended last night.

Both men are Black, and Black and Latino people make up more than half of death row nationally. Activists have long emphasized the systemic racism inherent in the death penalty system.

The killing of Grant and the dramatic, last-minute fight for Reeves’s survival comes “amidst a relatively new phenomena” of forcing prisoners to choose how they will be killed, according Abe Bonowitz, an organizer with Death Penalty Action. Both men were reportedly given a “decision” about how they would be killed but failed to make it in time.

“We’re opening the 2022 execution season with the killing of two Black men who have a mental illness or intellectual disability, with lethal injections, because for whatever reason they didn’t choose the form of execution,” Bonowitz said in an interview on Thursday. “That is only reason they are being killed today.”

In a handwritten letter to a federal judge, Grant explained that he did not understand a lawyer who told him that he must affirmatively choose a different method besides lethal injection in order to join a class-action lawsuit challenging the practice in Oklahoma, which could have delayed the execution. Like others on death row, Grant also had religious objections to participating in his own execution by choosing the method of killing, according to legal filings.

A lawsuit filed by attorneys for Reeves argued the 44-year-old was intellectually disabled and functionally illiterate, and prison officials violated his rights under the Americans with Disabilities Act by failing to help in understand, fill out and submit a form that gave him a choice between dying by lethal injection or in a gas chamber.

Had Reeves filled out the form requesting to die by gas “hypoxia” rather than lethal injection, he would not have been executed yesterday.

Alabama recently built a “system” for smothering people with nitrogen gas after lawmakers greenlit executions by gas in 2018, but the system has yet to be tested on a human being in Alabama or the handful of other states that allow gas executions. Experts say nitrogen executions could go wrong, and Alabama officials are still ironing out “protocols” for killing with a gas chamber or similar poison gas delivery system, which are likely to face litigation when complete, according to Bonowitz.

Had Reeves filled out the form requesting to die by gas “hypoxia” rather than lethal injection, he would not have been executed yesterday, Bonowitz said.

“Everybody got to choose and he didn’t understand the form or how to fill it out, and that’s why he is up for execution,” Bonowitz said during the last hours of Reeves life. “Those who chose the gas chamber cannot get a date.”

A federal judge agreed that Reeves was likely to win his lawsuit and issued a stay on the execution that was upheld by an appeals court. The State of Alabama then asked the Supreme Court to lift the stay so Reeves could be put to death by lethal injection on Thursday. Five of the court’s conservative justices agreed, with Justices Elena Kagan, Stephen Breyer, Sonia Sotomayor and Amy Coney Barrett dissenting. Barrett is a conservative Catholic, and the Catholic Church now officially opposes the death penalty.

Lethal injection is extremely controversial, and many pharmaceutical companies refuse to provide states with the medications necessary for carrying out such executions. Lethal injection also faces legal challenges — a federal judge in Ohio ruled that the state’s injection protocol was unconstitutional in 2017 — pushing state lawmakers to consider abolishing the death penalty or deploying other methods of state-perpetrated murder. Like Alabama, Oklahoma prison officials also pursued nitrogen gas as an alternative to lethal injection, an effort that stalled last year as the state restarted its notorious lethal injection program.

A pair of apparently torturous lethal injections in 2014 and 2015 shocked the public and led to a moratorium on the execution method in Oklahoma, but last year state officials announced a new “protocol” for administering a three-drug cocktail that ultimately kills the recipient. When the Supreme Court denied his plea in October 2021, John Marian Grant (no relation to Donald Grant) became the first person to die by lethal injection after the moratorium. Grant repeatedly gasped for air, convulsed and vomited during the first and second phases of the execution.

Donald Grant and Gilbert Postelle, a man who is scheduled to be executed in Oklahoma next month, pointed to John Grant’s death as evidence of “severe pain and suffering” that violates the constitutional ban on cruel and unusual punishment. Grant and Postelle had both requested they die by firing squad (which they argued would be less painful) in order to become plaintiffs in a lawsuit against lethal injection filed by death row prisoners, but the Supreme Court denied their request to intervene. Postelle is schedule to die on February 17, about a week before the lawsuit goes to trial.

The death penalty is still legal in 27 states, but lawmakers in Utah, Ohio, and other states where dozens of people are currently on death row are now considering abolishing the death penalty. Additionally, California, Oregon, Pennsylvania and the federal government have declared a moratorium on executions. Other states are moving in the opposite direction as lethal injection is challenged. South Carolina, for example, is creating the firing squad and also gives prisoners the choice to die in the electric chair.

“We can see the end of the death penalty coming in the United States,” Bonowitz said. “But first it’s likely to get bloody.”

Reeves, who had a low IQ, was convicted of robbing and murdering a man who picked him up on the highway at the age of 18. Grant was convicted of killing two people to cover his tracks after robbing the hotel where he worked in hopes of bonding his girlfriend out of jail.

Bonowitz emphasizes that, questions of execution methods aside, advocates hope to abolish the death penalty entirely.

“At the end of the day, for those of us concerned about the death penalty, the issue is not how we kill our prisoners, but that we kill them at all when the criminal legal system in this country is as broken as it is,” Bonowitz wrote in an email.

Reeves called into a virtual prayer vigil with activists, faith leaders and supporters just minutes before the group learned of the Supreme Court ruling that would seal his fate. Reeves said attorney and guards were gathering outside his cell.

“Thank ya’ll for your prayers and standing for me and trying to make change,” Reeves said.