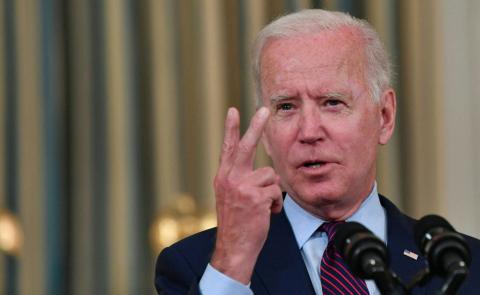 President Joe Biden gestures as he delivers remarks on the debt ceiling from the State Dining Room of the White House on October 4, 2021, in Washington, D.C.

In a scene eerily reminiscent of the Hindenburg disaster of 1937, a tight-knit group of progressive activist socialist Democrats splintered their party’s chances of saving their House majority in next year’s midterm elections, and all but doomed President Biden’s social agenda to defeat. House moderates, whose patience with their far-left colleagues has worn thin, lamented the big setback for the president while reminding reporters that Medicare and drug prescription price reforms are not in line with the priorities of the greatest health care system in the world…

Ha, wait. Sorry, wrong meeting. For a minute there, I thought I was supposed to be writing for the corporate “news” media.

“Splintered Dems,” howled The Washington Post’s headline last Friday, with The New York Times weighing in with “Big Setback for Biden.” Absent the facts, last week’s mainstream reporting would have left most with the impression that the Congressional Progressive Caucus had sacked the Capitol Building again, and President Biden was crouched in the Rose Garden rubbing gravel in his hair.

Both reports, along with an avalanche of similar stories throughout the “mainstream” press, made it sound for all the world like the Congressional Progressive Caucus had singlehandedly destroyed the president’s entire legislative agenda out of wildly malicious bomb-throwing spite. The truth — which has been slowly revealing itself as it cuts through the fog laid down by lobbyists and the paid-for press — is that the Congressional Progressive Caucus was loyally defending Biden’s agenda against an onslaught of corporate-owned conservative Democrats, and it succeeded with his official, in-person blessing.

Another Post article from Friday with a similarly wound-up headline — “The Biden agenda is in peril. Here’s the reason it might survive” — actually managed to get the story straight. Greg Sargent reports:

In the through-the-looking-glass media coverage of the Democrats’ brutal slog to pass President Biden’s agenda, the story has often been that radicalized progressives are threatening to derail the whole thing, because they refuse to accept the “reality” that the final package must be in sync with what the conservative faction of Democrats says is “possible.”

But this gets the story wrong. In fact, the progressives’ stand on Thursday makes successful passage of Biden’s agenda more likely, not less. To be clear, it’s very plausible the whole thing could still implode. But if so, that lefty stand won’t be why.

By refusing to help pass the infrastructure bill, progressives helped secure more space for negotiations on the reconciliation framework. The reconciliation bill is the Biden and Democratic Party agenda: It’s made up of all the climate provisions, economic infrastructure and tax reforms designed to secure our decarbonized future and rebalance our political economy after decades of upward skew. The centrists are the ones who oppose passing this agenda.

When the smoke cleared, the self-imposed artificial deadline for passing the infrastructure bill had been postponed until Halloween; even with a two-week congressional break between now and then, there should be enough time to cool tempers and negotiate a version of the Buy Back Better Act (BBB Act) that can survive the strange, cruel attentions of Joe Manchin and Kyrsten Sinema.

Manchin and Sinema emerged from this process looking damaged and foolish. Sinema in particular proved to all and sundry that there is no functional difference between her and a cardboard cutout of her when it comes to making deals; on Friday, when the rubber finally met the road during these negotiations, she was in Arizona for a personal matter followed by a fundraiser — the latter being a fact Saturday Night Live had a bit of sport with. Even to this hour, nobody knows what Sinema specifically wants from these negotiations. Perhaps she wants nothing at all; she already got $750,000 in campaign donations from pharmaceutical and medical interests. Perhaps she thinks asking for more is just greedy.

As for Manchin, his long obstruction game came toppling down on his head when President Biden showed up on Capitol Hill and sided with the Congressional Progressive Caucus on the coupling of the infrastructure and budget bills. The man who, like his cohort Sinema, refused for many grinding weeks to say what he wanted suddenly announced his demand that the BBB Act price tag come down to $1.5 trillion. This will, of course, become a fight, but at least everyone finally knows what the fight is to be about.

The senator from West Virginia overplayed his hand, and while he still holds some strong cards, the Congressional Progressive Caucus holds the high ground with the Speaker and the president.

Perhaps more insidiously, Manchin is insisting that the anti-abortion Hyde Amendment remain within the legislation; the members of the Congressional Progressive Caucus have been entirely forthright about their intention to jettison the Hyde Act from the bills. Congressional Progressive Caucus Chair Pramila Jayapal sounded a cautious note even as she laid down her marker. “Let’s just wait,” she told CNN, “this is a negotiation and we’ve got to continue to move this forward, but the Hyde Amendment is something that the majority of the country does not support.”

Manchin still intends to cause trouble for the BBB Act, but his veneer as the immovable object has been cracked, and the Congressional Progressive Caucus knows it. “That’s not going to happen,” Jayapal said of Manchin’s $1.5 trillion ceiling. “That’s too small to get our priorities in. It’s going to be somewhere between $1.5 and $3.5, and I think the White House is working on that right now. Remember: What we want to deliver is child care, paid leave, climate change.”

While yet another retreat on the vitally necessary money to be spent implementing the BBB Act is dispiriting, the fact remains that nobody knows what the final product will be. The fact that Biden and Pelosi came so conspicuously down on the side of the Congressional Progressive Caucus, and that the caucus itself is wide open to negotiation on the final number, seems to indicate the expectation of negotiating down was part of the process from the beginning.

“There’s been a lot of talk about needing to compromise, about the progressives’ violating the political taboo of making the good the enemy of the perfect, of preferring all of nothing to a lot of something,” writes Josh Marshall for Talking Points Memo. “But this has pretty clearly not been the case. Rep. Jayapal publicly and Biden and Pelosi less publicly have been asking Manchin to name his number. They’re practically begging to compromise down. What they’ve been resist[ing] is being dictated to or surrendering all their leverage and getting an unknown reconciliation bill in which they’d be beggars rather than negotiators.”

After a little breather, they’ll all be back to it soon enough. The senator from West Virginia overplayed his hand, and while he still holds some strong cards, the Congressional Progressive Caucus holds the high ground with the Speaker and the president. I’ll bet it was awfully quiet at Manchin’s house this weekend. I’m sure it was even quieter at Sinema’s; she wasn’t even home. Meanwhile, Big Pharma and the medical industry lobbyists must be seething. All that money spent on spin, and all they did was gouge a hole in the lawn.