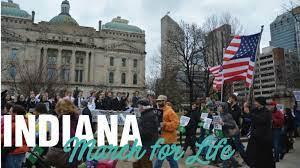 Hundreds of Hoosiers bundled up to gather outside of the Indiana Statehouse on Monday for the annual "March for Life" to show their opposition to abortion, as Indiana lawmakers inside the building hold off on major abortion-restricting legislation.

Anti-abortion advocates and some lawmakers are instead pushing for a special session, which would cost taxpayer money, once the United States Supreme Court rules on a controversial Mississippi law that bans most abortions after 15 weeks. The court decision could threaten key components of the longstanding Roe v. Wade decision.

"We will ban abortion," Sen. Liz Brown, R-Fort Wayne, told those in attendance after they had marched around the downtown area, "and we will make sure those women know that we are empowering them and giving them a choice, the right choice, to bring light."

At least four abortion-related bills were filed this legislative session, including House Bill 1282 from Rep. Curt Nisly, R-Milford, which would outright ban abortions, and Senate Bill 309 from Sen. Erin Houchin, R-Salem, which would require the General Assembly to meet if the Supreme Court allows the state to further restrict abortions.

Neither of those bills appear poised to receive a committee hearing this legislative session, as the deadlines approach this week. Meanwhile a Supreme Court decision isn't expected for months.

"The Roe decision is in peril and we know Indiana lawmakers will be back the minute they have a chance to ban abortion entirely,"  said Jennifer M. Allen, CEO for Planned Parenthood Alliance Advocates. "Make no mistake, we are at a crisis point, and this is the moment for every elected leader who cares about health care, and all of us individually, to stand up, speak out, and fight back.”

Legislative leaders told reporters they want to wait until the Supreme Court decides whether to uphold Mississippi's controversial abortion language, a court decision that abortion rights groups warn could have a consequential impact on abortion access across the country.

"I think we're better served to see what happens and react to to the known than to speculate on the unknown," House Speaker Todd Huston, R-Fishers, said.

Senate President Pro Tempore Rodric Bray, R-Martinsville, said he'd support calling for a special session, depending on the outcome of the Supreme Court ruling. Gov. Eric Holcomb would have to call lawmakers back into session.

"This is the Supreme Court, you're not necessarily going to get a yes or a no," Bray said. "And so to try to anticipate what that might say and draft legislation to try to anticipate every possible solution or opinion that they may come out with just looks completely undoable to me, so I don't think it's wise to try."

During a December interview with IndyStar, Holcomb also argued it was too soon to move forward with legislation banning abortion at 15 weeks.

"I don't count my chickens before they hatch and and again, skipping record, but I really want to see what they decide," Holcomb said. "I think we're going to learn a lot more come June or July if that's the case and then we'll be better informed... and yes I will be ready to have that conversation."

His office said he will "wait for the Supreme Court ruling before he makes any decisions" on whether to call for a special session.

During the Statehouse rally on Monday, U.S. Sen. Todd Young and Congressman Greg Pence, both Republicans, joined supporters on the steps of the Statehouse in the 30 degree weather, days after the 49th anniversary of Roe v. Wade.

"I believe this will be the last anniversary in which Roe v. Wade is the settled law of the land and this is where the real work starts," Young said.

Organizers also urged those rallying to contact their lawmakers and ask them to push for a special session. Some anti-abortion advocates argue lawmakers should champion change during this legislative session instead of waiting.

"The time to do the right thing is always right now. They should put those laws on the table" said Ben Ramsey, who traveled two hours to attend his third annual march. "Our legislators should pass laws and enforce them because it's human life, and that would send a very strong message to Washington."

The only abortion-related bill that has moved forward so far this legislative session is House Bill 1217, which requires women seeking an abortion to be asked if they are being coerced into doing so.

Planned Parenthood Alliance Advocates argued the bill was just "another attempt in a long line of targeted restrictions intended to eliminate access to abortion in Indiana."

That bill, filed by Middlebury Republican Rep. Joanna King, already passed out of the House Courts and Criminal Code committee and could receive a vote on the House floor as early as this week.

For years Indiana has passed laws slowly chipping away at abortion access. Last year for example, lawmakers passed a bill requiring abortion providers to share information on a so-called abortion "reversal" drug, something opponents of the measure called junk science.