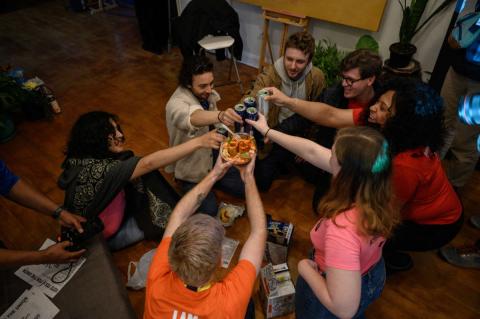 In a stunning win, Amazon warehouse workers in Staten Island, New York, have voted to form the company’s first union in the U.S., overcoming a years-long, multimillion-dollar union-busting campaign.

Workers at the JFK8 warehouse voted 55 percent in favor of the Amazon Labor Union (ALU) with a vote of 2,654 to 2,131, according to Thursday and Friday’s ballot counts from the National Labor Relations Board (NLRB). Roughly 8,300 workers are eligible to be a part of the union, likely making it one of the largest bargaining units in recent history.

The vote is a major victory for the union, and is especially remarkable coming from a fully independent union that was only formed last year. It will send shockwaves across the country as the labor movement experiences a resurgence, demonstrating that workers can overcome huge odds in labor organizing.

Amazon, which has been accused of illegal union busting by the NLRB, had waged a fierce anti-union campaign at JFK8, harassing workers with racist remarks, firing organizers, and employing a wide range of other typical union busting tactics like holding mandatory anti-union meetings and surveilling pro-union workers.

In February, New York police arrested Smalls and two other ALU organizers for bringing food to workers on behalf of the union, which they said was clearly a tactic by the company to intimidate workers against the union. The company claimed that the workers were trespassing. Amazon also fired Smalls in 2020 for organizing a walkout over the company’s COVID-19 safety protocols.

Workers at the Amazon BHM1 warehouse in Bessemer, Alabama, also had their votes counted this week. With a majority of the ballots counted, the union drive, led by the Retail, Wholesale and Department Store Union, was behind with 875 votes in favor and 993 votes against. However, there are still over 400 ballots that have been challenged by either the company or the union that won’t be counted until the NLRB decides whether or not they’re valid.

Bessemer workers have also faced brash anti-union moves from the company. This is their second chance at forming a union after the NLRB determined that Amazon illegally interfered with the first election; though the union is behind so far in this attempt, it is much closer this time around. Last time, the labor board took particular issue with a mailbox that Amazon installed on company grounds to collect ballots that workers said was constantly surveilled by the company to intimidate workers who may be voting “yes.”

Between union busting in Bessemer and Staten Island — including anti-union moves at another Staten Island warehouse that has yet to vote on unionizing — Amazon spent a total of $4.3 million on anti-union lawyers last year, according to financial filings.

JFK8 workers will now face another challenge: negotiating with Amazon to create their first contract. The company will likely continue employing anti-union tactics to stonewall union workers, as countless anti-union employers have done before them.

Sharon Zhang is a news writer at Truthout