A Republican's damning admission offers a dark preview of the future 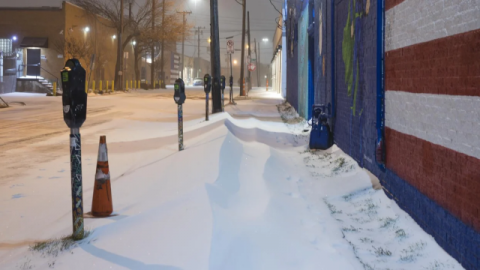 As Texas battles a severe snowstorm and mass power outages this winter, Tim Boyd, the now-former Republican mayor of Colorado City, revealed his party's plan for the deadly extreme temperatures linked to climate change. In a lengthy Facebook post that was deleted soon after it went viral, then-Mayor Boyd told his residents that they were entirely on their own as the brutal winter weather caused mayhem and deaths across the Lone Star state.

His honesty was like catching a glimpse of a rare animal in the wild. "Sink or swim[,] it's your choice!" he wrote, without bothering to couch his words in euphemisms. Boyd added, "The City and County, along with power providers or any other service owes you NOTHING!" For such an exhortation to come from the elected leader of a city—a man literally chosen by his people to ensure that local government works for them—was shocking.

Just as they pay their mayor, Colorado City's residents also pay authorities to provide them with basic necessities like electricity and water. But apparently, Boyd thought an expectation of services was out of line. He conjectured, "If you don't have electricity you step up and come up with a game plan to keep your family warm and safe." Many Texans have tried to do just that, running their car engine in their garage to warm their homes. So far in Harris County, there have been at least 50 cases of carbon monoxide poisoning and several people have died.

"If you have no water you deal without and think outside of the box to survive and supply water to your family," posited Boyd, expecting Texans who were searching for ways to provide their own electricity to also deal with a lack of water as pipes froze in the plummeting temperatures.

Boyd's diatribe veered into familiar Republican territory as he blamed residents for their own plight by saying, "If you are sitting at home in the cold because you have no power and are sitting there waiting for someone to come rescue you because your (sic) lazy [it] is [a] direct result of your raising." It is a long-simmering idea among conservatives that Americans who depend on their government are simply lazy.

Generally, white conservatives have reserved the word "lazy" for people of color who are victims of systemic racial discrimination. Indeed, the weather-related blackouts in Texas impacted the residents of minority neighborhoods disproportionately. Boyd and those who share his views would likely assume this must have been a direct result of their laziness.

Hours after writing his screed, Boyd announced his resignation and apologized. But he qualified his apology by saying that he never meant to imply that the helpless elderly were the lazy ones—just everyone else. "I was only making the statement that those folks that are too lazy to get up and fend for themselves but are capable should not be dealt a handout," he wrote in a manner that suggested he was "sorry, not sorry."

Most Republicans are not as overt as Boyd in their faith in social Darwinism. Take Texas Governor Greg Abbott, who instead of openly blaming Texans for their own suffering instead decided to blame climate-mitigating policies and renewable energy programs like wind power. Speaking on Fox News, Abbott railed against the "Green New Deal," claiming that a reliance on wind turbines was disastrous because the state's wind-generated power "thrust Texas into a situation where it was lacking power on a statewide basis." For good measure, he added, "It just shows that fossil fuel is necessary."

The conservative mindset can be counted on to prioritize private interests over public ones. In a Republican utopia, the rich are noble and deserving of basic necessities, comforts, and life itself. If they have rigged the system to benefit themselves, it means they are smart, not conniving. In the future that Republicans promise, "Only the strong will survive and the weak will parish (sic)," as per Boyd's post. In other words, our lives are expendable, and if we die, it is because we deserve it and were simply not smart enough to survive.

This was utterly predictable. Republicans have used this same approach on health care—think of all the Republican governors who backed lawsuits against the Affordable Care Act and opted their states out of the federal government's Medicaid program even though a majority of Americans support Obamacare. Even more Americans support the government nationalizing health care, but Republicans warn that if the program is expanded from Medicare for those over 65 to all Americans, it will suddenly become "socialism" and thus "evil." Their solution for health care is the status quo of a deregulated "Wild West" private insurance market.

Republicans have offered a similar approach to the coronavirus pandemic where any public safety standards set by the government are anathema to "personal freedoms," even though a majority of Americans support such precautions. It is also how Republicans have approached poverty and rising inequality: by opposing a federal government increase to the minimum wage even though most Americans want a floor of $15 an hour.

Interestingly, Republicans believe strongly in the idea of "big government" when it comes to regulating their pet social issues such as harsh anti-immigrant measures and attacks on abortion. (Meanwhile, most Americans support a pathway to legalization for the undocumented and a majority supports reproductive choice.)