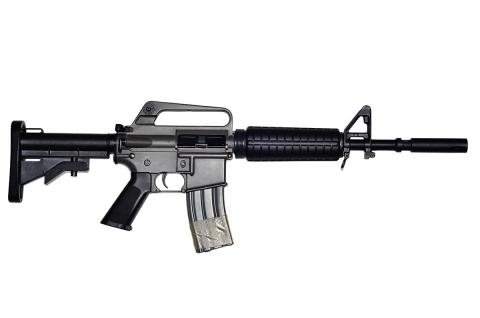 Let’s start with the obvious. President Biden is right. America has to ban the legal sale of rapid-firing military assault weapons capable of murdering hundreds of human beings within minutes. Mass murderers use those weapons every year in our country to kill hundreds of people including precious little children.

We’re the only civilized nation on earth that allows military weapons with high-capacity magazines to be openly sold to civilians. That’s why we lead the world in mass murders and school shootings.

“Guns are the No. 1 killer of children in the United States of America,” Biden said in his televised prime-time address calling for a ban. “Over the last two decades, more school-age children have died from guns than on-duty police officers and active-duty military combined. Think about that . . . For God’s sake, how much more carnage are we willing to accept?”

Couple that revolting statistic with another obvious fact. Our elected representatives in Washington will never succeed in banning assault weapons as long as Senate Republicans refuse to even discuss a ban or allow a vote on the issue. Republicans fraudulently claim owning a military assault rifle is a Constitutional right in America.

Biden has been battling Republicans’ ghoulish support for civilian purchase of military assault weapons ever since 1993 when then-Sen. Biden led the fight for President Clinton’s successful 1994 assault weapons ban. It existed for a decade in America until Republicans regained control of the Senate under President George W. Bush. They allowed the ban to expire in 2004 without even taking a vote.

A year later, Republicans passed an even more fiendish pro-gun law, the Protection of Lawful Commerce in Arms Act shielding gun manufacturers and dealers from liability in civil lawsuits on behalf of victims murdered and injured with their products. Biden also urged repeal of that special protection for the gun industry: “They’re the only industry in this country that has that kind of immunity.”

Biden promised: “I’ll never give up. And if Congress fails, I believe this time, a majority of the American people won’t give up either. I believe the majority of you will act to turn your outrage into making this issue central to your vote.

Voters in Wisconsin and other battleground states in November have a real opportunity to do something meaningful to reduce the rapidly increasing mass murders threatening every community.

There was a time when the deadly gun industry controlled elected politicians in both major parties. Those days are over. In today’s 50-50 Senate, Republicans insist on only the weakest possible gun restrictions, but Democrats are no longer afraid to vote for strong restrictions on guns capable of mass murder. They’re supported by the majority of responsible gun owners, police officers tired of being outgunned and hunters and sportsmen opposed to mass murder.

Two Democratic senators, however, refuse to change a Senate’s filibuster rule that allows a single Republican to block legislation supported by the majority of Americans. Fortunately, strong Democratic senate candidates in multiple swing states are eager to end the anti-democracy filibuster.

“I will never let archaic Senate procedure stand in the way of our basic human rights whether it’s the right to live free from gun violence, abortion access or the right to vote,” Barnes said last week. “People are motivated. They want leaders that will do everything possible and that means getting rid of the filibuster. It has to go.”

There’s stronger support for real action on assault weapons than there’s ever been. But a drastic proposal to try to shame Republicans into banning assault weapons by publishing the horrific photographs of the small children torn apart by an AR-15 in Uvalde won’t work. Republicans have no shame.

If the mass child slaughter in Newtown and Uvalde didn’t convince Republicans to ban assault weapons, obscene pictures of the results of their indifference won’t either.

All we can do is elect national leaders committed to banning the sale of military assault weapons that repeatedly murder hundreds of human beings, including the sweetest little ones in our lives. It’s time to act.