The Biggest, Most Dangerous Divide in Politics 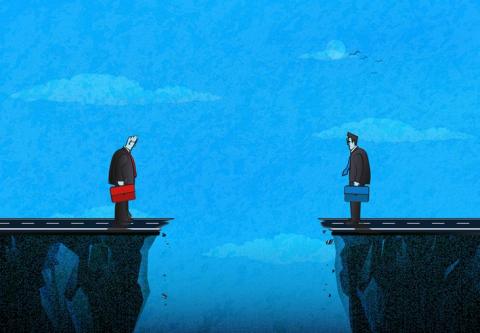 Despite what many people believe, the biggest divide in politics today isn’t between the left and the right. It’s the growing political divide between the honest and the dishonest. It’s an enormous chasm that’s getting bigger all the time.

This is not the normal exaggeration and shading of facts we’ve come to expect from all politicians to put themselves in the best possible light. It’s an alternative reality in which politicians will publicly insist on the truth of clearly provable falsehoods. Up is down. War is peace.

Without any shared set of facts, Democrats can no longer believe anything Republicans say. It didn’t start with Donald Trump, but in his four years as president he lied like he breathed. The final tally by Washington Post fact checkers was 30,573 documented lies, a stunning world record unlikely ever to be surpassed.

Instead, swarms of Republican Mini-Mes ever since seem to be going for Most Creative Absurdity. Wisconsin Sen, Ron Johnson is a strong contender for pretending the hundreds of insurrectionists breaking into the Capitol were peaceful patriots petitioning their government for change. The violent mob was responsible for the deaths of five police officers, one murdered and four by suicide, and injuring 140 other officers, many brutally beaten with flagpoles, metal pipes, baseball bats and hockey sticks.

Texas Gov. Greg Abbott and Georgia Gov. Brian Kemp also deserve special recognition for promoting election perversion laws in their states that would allow Republican legislators to throw out millions of legally cast votes if they don’t like the results as “election integrity laws.”

It is simply amazing what well-educated, articulate, elected Republicans are willing to say right out loud in public. Many of us watching are either highly amused or infuriated. Those people are surely intelligent enough to know what they’re saying is ridiculous, right?

Unfortunately, at this moment in our history, the consequences can turn life-threatening very quickly. As Republican mothers should have told their children, it’s all fun and games until somebody puts an eye out or dies from COVID. With the highly infectious delta variant spreading like climate-change-stoked wildfires through unvaccinated communities, lying Republican governors are becoming a national menace.

The two most dangerous governors in America right now are Florida Gov. Ron DeSantis and Abbott in Texas. Their states quickly shot to top of the list of the most life-threatening places in the nation accounting for more than a third of all new coronavirus infections in a frightening surge of the pandemic.

Both governors have gone beyond their reckless political rhetoric that Floridians and Texans should be free from government mandates requiring life-saving vaccines and the wearing of masks to stop the rapidly spreading disease by cruelly issuing executive orders and passing laws banning local communities and school districts from protecting their own vulnerable citizens and school children.

Republicans have never been very credible proponents of the constitutional freedoms they’re eager to deny racial and religious minorities and anyone other than themselves. They’re even less credible now after defending Trump’s supporters for participating in the most violent attack on democracy in modern history.

You know rightwing Republicans are lying to you when they argue that deciding whether to be vaccinated to protect public health should be a matter of personal choice. It’s your body and your choice and nobody else’s business. Choice is not a concept Republicans have ever recognized in their half century battle to deny women their constitutional right to make their own decisions about their bodies and health care regarding abortion.

DeSantis and Abbott don’t appear to understand the concept of freedom either. They have absolutely no qualms about denying the freedom of parents to send their children to safe schools where vaccines and masks are required for eligible children, teachers and staff. Children under 12 are defenseless in a resurgent pandemic because they’re too young to receive life-protecting vaccines.

Republicans are intentionally trying to politically sabotage President Biden’s effort to protect the nation from a deadly new variant of coronavirus by discouraging vaccinations and protective measures. As a result, they now own all the totally unnecessary deaths and serious illnesses once again filling hospital systems to capacity and beyond.

It didn’t have to be this way. Freely available vaccines that are overwhelmingly effective in preventing serious illness and death under even the new, more virulent variant of COVID were developed during Trump’s presidency. Trump and his Trumpian Republicans could just as easily have publicly promoted the vaccinations he’s always claimed credit for even though he never got around to creating an effective national distribution system for them.

Republicans just can’t seem to bring themselves to do anything that would help Biden successfully protect American lives and possibly finally bring an end to the deadly pandemic Trump was never able to control. The Trump effect on the Republican Party continues. They care only about themselves.