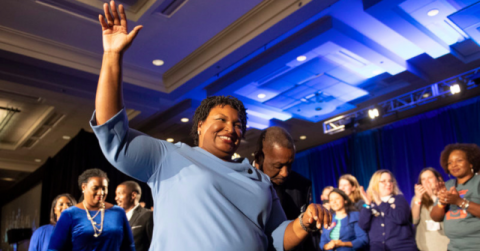 It’s very likely that Stacey Abrams is not governor of Georgia today because in 2018, she and thousands of the state’s voters were victims of voter suppression that propelled then–Georgia Secretary of State Brian Kemp into the governor’s office. She wasn’t quiet about this, not just because the shenanigans probably cost her the election, but because the methods that were overtly employed to suppress the vote were of national significance—and echoed the racist tradition of preventing Blacks from voting in the Jim Crow era.

Today, President Donald Trump is not conceding the state of Georgia to President-Elect Joe Biden, despite having advanced no plausible grounds for disqualifying the 14,000 votes that he trails by in the formal count. It is widely understood that Trump’s declaration that “everyone knows that we won the state” is a temper tantrum rather than a serious, evidence-based challenge to the official results in this electorally important Southern state.

For NPR (11/18/20), though, Abrams’ and Trump’s complaints are more or less the same. “A refusal to concede isn’t a new concept to Georgia,” wrote Emma Hurt of Atlanta NPR affiliate WABE, because Abrams “also refused to concede to her Republican opponent.” The piece does cite a spokesperson for Abrams as arguing that “her situation in 2018 and Trump’s today are nothing alike,” but it also quotes the official who manages Georgia’s voting system as saying that claims of fraud in 2020 and suppression in 2018 are both “false,” and that both charges “undermine confidence in the system.”

Meanwhile, the fact that Abrams criticized the vote is cited by Kemp’s former communications director as justification for Trump’s quest to overturn the election:

Stacey Abrams said that she had questions, and she wanted to count the votes, etc., etc. — so that same opportunity and process should be afforded to the president as well.

Trump’s refusal to concede in several states, including Georgia, is a comedy of absurdities and contradictions. Georgia Secretary of State Brad Raffensperger, a committed Republican, has not only defended the state’s balloting against Trump’s accusations (Yahoo! News, 11/17/20) but also exposed how Sen. Lindsey Graham (R.–S.C.) has pressured him to throw out votes in the president’s favor (CNN, 11/17/20). Raffensperger said he and his wife have received threatening text messages warning of consequences if the state doesn’t ultimately go to Trump (The Hill, 11/18/20; Washington Post, 11/16/20), including one that read: “You better not botch this recount. Your life depends on it.”

These hamhanded efforts to reverse the election results are not the same kind of complaint that Abrams made; they are an example of what she was complaining about, the negation of Black voting power in a state that traditionally disenfranchised African-American citizens. And the record about what Abrams’ protested two years ago is clear. For example, the Guardian (11/10/18) reported that 668,000 voters were purged in the state in 2017:

Of those 2017 numbers, investigative reporter Greg Palast told Salon, 200,000 people left the state, died or moved out their district, making them legitimate cancellations. However, through litigation, he got the entire purge list. “Of the 400,000 who supposedly moved, our experts will tell a court that 340,134 never moved—wrongly purged,” Palast told the Guardian, saying people had been purged for not voting in an election or two.

As Secretary of State since 2010, [Kemp] had eight years to winnow the electorate to his liking before November 2018, and did so by purging 1.4 million voters from the rolls, placing thousands of registrations on hold, and overseeing the closure or relocation of nearly half of the state’s precincts and polling sites. The unstated goal — though it was clear to anyone watching similar efforts by Republicans across the South — was to reduce the voting power of unfavorable constituencies: black people, poor people, students and others.

Georgia’s voter suppression tactics in the 2018 race were even probed by Congress, as reported by the New York Times (3/6/19). House investigators pointed out that voters in largely Black counties waited in voting lines for hours while “hundreds of available voting machines sat unused in government warehouses.”

The problem here is that one could be highly critical of Abrams’ politics and, if one was a Georgia voter, might not want her to be governor, and still acknowledge that her complaints about voter suppression are substantively different than Trump’s public meltdowns. For one thing, she is advocating for a fairer process that would benefit everyone, not just her. Trump just wants to find a way to get around his loss.

And there’s even a hint in the piece that NPR knows this. For example, it quotes Myrna Pérez, the elections and voting rights director at the Brennan Center, who talks about the partisanship of elections. NPR says that complaints about the election process must be based on “providing evidence to back up claims about the voting system” and a “commitment to the system,” but that so far, according to Pérez, “Trump has offered neither.”

NPR doesn’t explicitly say, or quote a nonpartisan source as saying, that Abrams did present substantive evidence of voter suppression. Still, noting the absence of evidence from Trump makes an implicit contrast—one stark enough to raise the question, why make this comparison in the first place?

Despite the piece’s suggestion that the two cases are different, the association takes Abrams down a notch, unfairly giving the impression that she, too, was a sore loser like Trump. This comes at a time when many observers have cited her dogged campaigning as one reason Biden did so well in Georgia this year (AP, 11/8/20). She is also looking for a rematch against Kemp in two years (Daily Beast, 11/12/20).

This headline itself is an egregious false equivalency rooted in toxic both sides–ism that functions to normalize lies and extremism. And the comparison in the headline between an election outcome involving a Black candidate and the rampant, well-documented voter suppression of Black voters in Georgia during the 2018 midterm to a white nationalist president whose political party is still hellbent on throwing out Black votes in the 2020 presidential election — is racist. NPR should apologize for the headline and replace it.

In short, NPR gave readers a variety of viewpoints, giving the readers the choice of which set of facts they want to accept as true. That’s a dangerous gambit for a news organization, who should rather be trying to find the truth in the muck. Enjeti again:

Let’s also take a look at the content of the article itself which, at first blush, might seem more objective and balanced than the headline, when really it’s not. The writer here interviews members of both political parties about the two elections, and reveals their opinions about the outcomes. But the article fails at the first sentence because the entire premise of the article is based in the very same lie suggested in the headline’s question. This is a classic fruit-of-the-poisonous-tree issue in mainstream media. An article based on a falsehood is rooted in fiction, not the truth, and no attempt by the writer to rehabilitate the story will succeed. On the contrary, the article feeds the lie, and gives it a platform, and strongly suggests that the lie was reasonable to begin with, that it was merely a different perspective on the same truth.

NPR makes the fight against racist voter suppression seem like hyperbolic partisanship when placed next to Trump’s refusal — it “minimizes the seriousness of voter suppression,” according to Enjeti. Trump is refusing to concede because he doesn’t like the outcome. Abrams’ protests two years ago were about a systemic wrong committed not just against her, but against the Georgia voting public, especially Black voters.

NPR, in this instance, trivialized the outcry against not just this instance of voter suppression, but the context of historic voter disenfranchisement in the South. NPR might not have meant to do this, but the damage is done.