Kyle Rittenhouse, white supremacy, and the privilege of self-defense 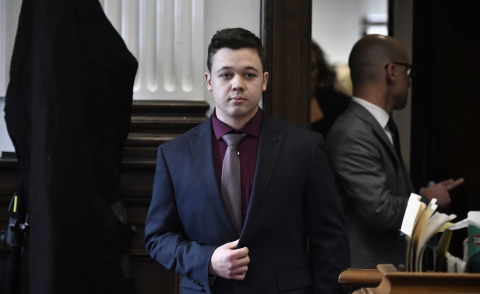 The jury has spoken. Kyle Rittenhouse is not guilty.

President Biden says we must acknowledge and abide by the fact that a Kenosha jury found Rittenhouse not guilty on all accounts. Because, he believes, the jury system works.

Last year, at 17, Rittenhouse traveled some 20 miles to Kenosha, Wis. He killed two men and injured a third. But it was all self-defense. He wasn’t looking for trouble. He meant to be a helping hand.

Armed with an AR-style semiautomatic weapon, he walked the streets of a protest against police brutality to play cop. Or was it to be a medic? Oh, it was about property. That’s the story he landed on. Protecting property.

“Violence and destruction of property have no place in our democracy,” Biden said in a statement about the verdict Friday afternoon.


It’s all about the money. Rittenhouse, after all, was out to secure the car lots.

The National Guard has already been activated by Wisconsin. Biden immediately offered his assistance in assuring public safety. Because the narrative is always that those being crushed by oppression are vicious. The American inclination is to protect the power structure, to uphold the institutional ideal of whiteness, at all times.

You can be a vigilante when your mission is to serve the system. Rittenhouse knew this. It’s why he so smugly posed with Proud Boys, allegedly drinking underage in a bar, flashing white power signs, and rocking a “Free as F---” T-shirt earlier this year shortly after pleading not guilty.

White boyhood is an armor that inspired Judge Bruce Schroeder to ban prosecutors from tying Rittenhouse, a self-proclaimed militia member, to the Proud Boys. A flimsy loophole allowed the judge to toss a weapons charge before closing arguments even began — legally armed Black folk don’t get this grace. Remember Philando Castile?

The judge saw a boy. A white boy whose humanity mattered in a way that did not extend to those protesting for equity and a new way of justice. Attorneys, in a court of law, were banned from referring to the men shot, killed, and injured by Rittenhouse as victims. To call Joseph Rosenbaum, Anthony Huber, and Gaige Grosskreutz, victims, or even alleged victims, would be too loaded.


Rioters. Arsonists. Looters. Refer to them that way, the judge told the lawyers.

Those victims, too, were white like Rittenhouse. But when you are white and perceived to be fighting for Black lives to matter, your life is also up for grabs. There’s a difference between being white and believing in the authority of whiteness.

Two men are dead and they weren’t even allowed to be acknowledged as alleged victims. The judge was not interested in neutrality or justice. His scales are weighted in supremacy.

Biden’s beloved democracy is more of a power structure rooted in violence and injustice than anything else. Had Rittenhouse been Black, Latino, or an immigrant, he’d be dead or serving time.

Had he been white and protecting Black lives in Kenosha instead of purportedly protecting cars, he’d be in prison. Or maybe cops would have pepper-sprayed him instead of giving him gratitude and water. Rittenhouse has the privilege of white power.

“He wants to get on with his life,” his defense attorney Mark Richards told reporters Friday. “He has a huge sense of relief for what the jury did to him today. He wishes none of this ever happened. But as he said when he testified, he did not start this.”

Rittenhouse left Illinois to cross state lines, armed himself, and told a bevy of lies about why he was at the protests that started over the unjust shooting of Jacob Blake. Shot seven times, mostly in his back, Blake was partially paralyzed by police as he tried to get into a car. In front of his children. Officials didn’t see his humanity or theirs. Blake’s children were not kids the way America saw the boyhood of Rittenhouse.

Federal prosecutors won’t file charges against a white police officer who shot Blake. Blake is Black like Julius Jones, who was sentenced to death more than 20 years ago. A death sentence at 19, just a year older than Rittenhouse. He’s spent more than half his life on death row and clings to his innocence.

As Rittenhouse was preparing to move on with his life, Jones was to be executed, on Thursday afternoon. Justice advocates feverishly fought to have his sentence commuted.

Hours before the execution was set to take place, Oklahoma Governor Kevin Stitt spared his life. Kind of. A condition of this American grace is Jones must serve a life sentence without possibility of parole.

And while Jones was praying to live another day, the white men who hunted and killed Ahmaud Arbery sat before a jury of 11 white folk and one Black person. This is the jury system Biden says works.


Yet, it’s the pastors who gather to stand in prayer with Arbery’s family who are called the problem. A defense attorney in the trial called their mere presence a 21st-century “public lynching.”

Arbery, young, Black, unarmed, and jogging, ran from those men. They sped after him in a truck, cut him off, and shot him. Again. And again. And again. How is that not the modern lynching?

They feared for their homes and their safety, deciding he was a burglar, they claim.

The danger isn’t in having 11 white jurors, the defense feels. The violence isn’t in grabbing your guns and chasing a jogger on foot and killing him. Racism isn’t even a topic of discussion in this trial thus far.

It’s part of the defense strategy.

Our system has spoken. The conversation is violent.