A Landmark Win for Domestic Workers Lurks in the Reconciliation Bill 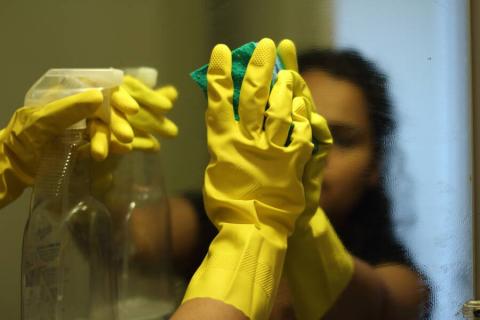 $190 billion for home care has been folded into reconciliation—toward measures aimed at improving pay and job security for domestic workers.

When Thomasine Wilson started her career as a home care worker 20 years ago, she had no fixed work hours. She toiled at the whim of her employer — without overtime, days off or paid sick leave.

“We had no one who advocated for us,” Wilson says.

In recent years, the momentum behind building the power of domestic workers has grown. The National Domestic Workers Alliance started in 2007 in New York City and grew nationally by changing local laws, working with networks of immigrants to build a movement. The group organized in playgrounds and in numerous languages, reaching domestic workers who are often left out of labor organizing discussions. Labor unions, meanwhile, have taken up the baton and organized domestic workers into their ranks.

Yet, the deck of labor law is still stacked against home care workers in the United States, and unchecked exploitation remains the norm.

The pandemic laid bare the precarity of the occupation. ​“A lot of people stepped back from their jobs, but we could not step back from our jobs,” says Wilson, who is president of the Home Care Chapter of the Services Employees International Union in Virginia (SEIU Local 512). ​“Despite the risks of us getting sick with no insurance, no time off, no sick days, nothing.”

Employment protections for domestic workers were explicitly carved out of U.S. labor law in 1935, a legacy of racist Southern lawmakers. Then (as now), these jobs were largely held by women of color. Of the 2.3 million home care workers in the United States, 87% are women, 62% are people of color, and one in three is an immigrant. These workers aren’t universally guaranteed paid sick time or workers compensation’ by federal laws. Nannies and live-in housekeepers are even denied the federal right unionize. On average, domestic workers earn a $12.12 hourly wage, with annual earnings of $17,200; almost one in five lives in poverty.

Now, domestic workers are looking to the ongoing federal budget reconciliation process in hopes of improving wages and job security, and making caregiving more humane for all involved.

The Better Care Better Jobs Act was first introduced in Congress in June by Rep. Debbie Dingell (D‑Mich.) and Sen. Bob Casey (D‑Pa.). It has since been folded into reconciliation — a version was included in the legislation that the House Energy and Commerce Committee recently marked up and passed as a key component of the Build Back Better package. If passed, it would provide federal funds to help eliminate gaps among states in terms of home care coverage, eligibility and standards of care — which should boost home workers’ wages.

“The legislation invests $190 billion to expand access to quality home-based services and care for millions of older adults and people with disabilities,” states a fact sheet on key provisions that made it out of the House Committee on Energy and Commerce markup. The measure allows individual states to make a plan for how that expansion will take place and, while there is no explicit requirement to raise minimum wage for domestic workers, supporters of the legislation are hopeful that this investment will improve domestic workers’ pay and job security. Domestic worker advocates are, however, pressing for full funding: Initially, President Biden had set a target of $400 billion for the legislation, and some want to bring the sum closer to this amount.

According to the fact sheet, the House bill will ​“strengthen the direct care workforce by improving provider payment rates and giving states the resources to improve their care infrastructure.” Under the legislation, states would get money they would use to set reimbursement rates for agencies that provide direct care services. The measure ensures there’s enough funding to raise those rates so that, when agencies are reimbursed by states, they can increase wages for domestic workers. According to supporters of the legislation, there’s a requirement that those dollars pass through to workers; the funds can’t be squirreled away by an agency or state.

The legislation also has key provisions aimed at improving care for elderly and disabled people — whose living conditions are domestic laborers’ working conditions. The fact sheet notes that the proposed legislation ​“makes permanent the Money Follows the Person and the spousal impoverishment program, both successful Medicaid programs that help low-income older adults and individuals with disabilities receive home-based services.” Spousal impoverishment protections mean that if you’re married and your spouse has to start receiving Medicaid, you don’t have to lose all of your assets as a spouse (though you do have to decrease them to a certain extent). Money Follows the Person is a program that helps people move out of institutional settings, like nursing homes, and into home-based services. The program has only been around for about 15 years, but it’s been sporadically funded — this would make it permanent. Supporters of the legislation say it would also help decrease the waiting list for home and community-based services at the state level.

According to a Morning Consult and Politico poll from late August, 81% of people in the United States say they support expanding home care for elderly and disabled people in the reconciliation bill.

There’s also a provision in the bill that would create registries of domestic workers, which would make it easier for workers’ rights groups and unions to actually organize them. Domestic work is often decentralized, but, under the plan, groups like SEIU and the National Domestic Workers Alliance could go through registries and get in touch.

These measures are on the table thanks to the organizing and advocacy of domestic workers with the National Domestic Workers Alliance, as well as SEIU. Groups that advocate for elderly and disabled Americans, like Justice in Aging, have also been heavily involved in the push.

However, neither the initial proposed act, nor the version included in the Build Back Better package, will reform national labor law to undo key exclusions of domestic workers from protections. But supporters say the legislation would play an role in building the collective power of domestic workers by improving their pay and security, and by making it easier to organize them — something that is sorely needed.

Workers are trying to organize an industry where the need is vast, but conditions often poor. According to SEIU’s calculations, with more than 10,000 people turning 65 every day in the United States, the country will require 4.7 million home care workers by 2028. Yet, the industry experiences high turnover rates due to low wages and a lack of benefits.

And the pandemic has brought new urgency for improved standards. ​“Domestic workers are among those worst hit by the consequences [of Covid-19],” states a June report from the International Labour Organization. ​“More domestic workers than other employees have lost their jobs or are seeing a dramatic reduction in working hours and correspondingly lower wages,” it goes on, also noting the risk of contagion for these front-line workers. Despite the widespread availability of vaccines, the delta variant introduces new concerns about breakthrough cases. According to the National Domestic Workers Alliance, 82% of domestic workers do not get paid sick days.

Celeste Faison, campaign director at the National Domestic Workers Alliance, is concerned about workplace conditions. ​“We have not seen sweeping changes in over 40 to 60 years,” she says, regarding wages, benefits and basic standards. If the measures fail, home care workers (already overworked and underpaid) will bear the brunt of this growing demand for home care across the United States.

Voters overwhelmingly support (73%) the content of the Better Care Better Jobs Act across party lines, according to an April poll from Vox and Data for Progress. Another poll from Navigator Research shows 76% support for raising wages for home care workers.

Home care workers have been excluded from labor protections because of ​“racism, sexism and the discrimination entrenched in this country,” Wilson says.

The Better Care Better Jobs Act, meanwhile, isn’t the only legislation domestic workers have their eyes on. The National Domestic Workers Bill of Rights, reintroduced in Congress in July, would give domestic workers paid sick leave and civil rights protections, including protections from workplace harassment. It would also give them the right to take breaks and protect them from lost pay due to cancellations. The National Domestic Workers Alliance helped conceive and advance the bill, but is waiting on the next big push until after the reconciliation process. (As far as that reconciliation process goes, the House will likely put out an overall package next week.)

Wilson notes how difficult the struggle for improved conditions is, particularly while working through a pandemic. ​“Why do we have to fight for everything that, for everyone else, comes naturally?” Wilson says. ​“We have to fight for basic things.”

Verrett connects the movement to the Black sanitation workers’ strike of 1968 in Memphis, credited with boosting demands for economic justice emphasis within the civil rights movement. ​“This absolutely is a civil rights issue,” Verrett says.

“We are creating the 21st-century labor movement, which is going to be led by women of color.”

Maurizio Guerrero is a journalist based in New York City. He covers migration, social justice movements and Latin America.

Sarah Lazare is web editor and reporter for In These Times. She tweets at @sarahlazare.