How Buffalo News Helped Keep a Socialist out of City Hall

Incumbent Buffalo Mayor Byron Brown’s seemingly quixotic write-in campaign for re-election, launched after losing the Democratic primary to democratic socialist activist India Walton, turned out to be successful. He had a lot of help in his corner, such as unions with whom he had long-standing relationships (WIVB, 9/6/21), Republicans who worried about a left-wing mayor (WGRZ, 8/19/21) and high-ranking New York state Democrats who withheld their endorsement of the nominee (City and State, 10/25/21).

Brown, crucially, also had the key support of the hometown paper, the Buffalo News. 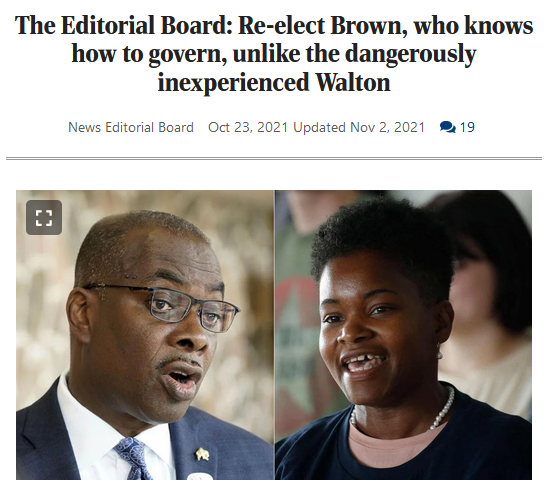 In its endorsement, the Buffalo News (10/23/21) said of Byron Brown, “There have been missteps, as there are with any mayor”—but it didn’t say what any of them were.

In its editorial endorsement (10/23/21) of Brown in the general election, the paper propped up Brown’s power of incumbency against Walton, whom the paper called “dangerously unqualified” and the “municipal version of electing Donald Trump: expecting great things from an inexperienced and unqualified leader who is sometimes driven by grievances.” It added that “many of her proposals would set the city back,” chastising her for going too far in demanding a reduction in the police budget. The paper argued that “although she has toned down her rhetoric since the June primary,” her “approach is divisive” and she is “a political rookie.”

The endorsement cited the News’s coverage (10/19/21) of an affordable plan Walton had championed as a community leader that failed to come to fruition, quoting one person who cited Walton and her partner’s “inexperience with complex housing projects of this scale.” This was a follow-up to another story (10/5/21) in which the News gave Brown the chance to criticize her record on affordable housing.

After having also endorsed Brown (6/12/21) in the primary, the paper (6/29/21) supported his write-in campaign. Enough city voters are “concerned about having an inexperienced and self-proclaimed democratic socialist take over the city’s top job that Brown’s write-in campaign has a chance to succeed,” the paper editorialized; Buffalo should not “undergo such a drastic change based on such a small number of primary voters.”

The Trump comparison is a standard charge corporate media throw against left candidates (FAIR.org, 1/24/20), illustrative of the content-free dismissal of progressive challengers: Anyone who deviates from establishment politics is like Trump, and thus all those connotations of intransigence, dishonesty, bullying and divisiveness stick with the candidate, even if they disagree with Trump on everything from policing to taxation to immigration. 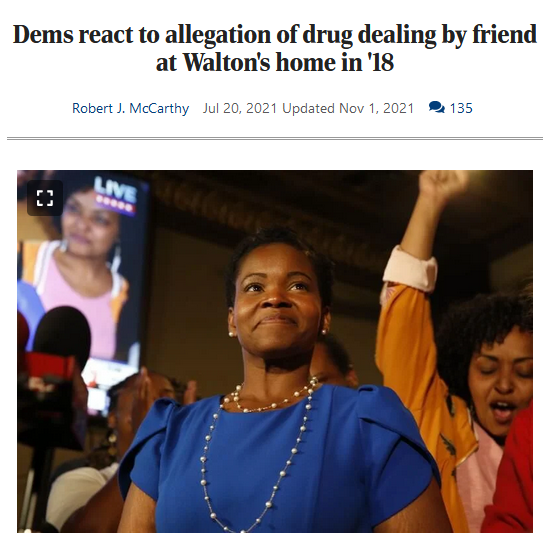 A police investigation into someone else that led to no charges was the focus of repeated Buffalo News articles about India Walton (7/19/21, 7/20/21).

The paper’s attacks on Walton weren’t limited to the editorial pages. The News (7/20/21) reported that “an allegation of drug activity at a house rented by Democratic mayoral nominee India B. Walton three years ago cast new perspectives on her campaign,” although the paper admitted that “nobody was charged in connection with the complaints activity,” adding that the “man suspected of dealing drugs from Walton’s home was Anson Whitted, who served more than 12 years in state prison for selling cocaine, assault and possession of a weapon.” It said, “Walton denied Whitted ever lived at her home, but acknowledged he occasionally stayed there.”

In short, she had nothing to do with any criminal activity whatsoever, but the Buffalo News sullied her name with racialized language about drugs and crime with a flimsy connection. About a dozen activists protested outside the paper’s headquarters for what  they called biased coverage against Walton, with one activist (WGRZ, 7/21/21) saying the News “article was full of ‘half-truths, misstatements and misallegations.’”

The News also played up Walton’s 2014 arrest when she was working as a nurse (8/19/21)—the details of which are murky, even by the News’ own accounting—insinuating that she was too questionable to be in the city’s highest office. The piece said that Walton was arrested “on a charge of second-degree harassment on June 27, 2014, at work at Children’s Hospital,” and that “the arresting officer said a fellow nurse had complained that Walton ‘has continuously threatened to do bodily harm’ to her.” Later on in the piece, the News says “Walton denied that she ever harmed the co-worker,” noting that she was “the victim of bullying on social media by the woman who had her arrested.”

What’s interesting about such lengthy coverage of the incident is that it ended with Walton receiving a slap on the wrist, as WIVB (7/8/21) reported that Walton “took an adjournment in contemplation of dismissal,” which is “a legal mechanism that allows charges to be dropped as long as a defendant stays out of trouble.” 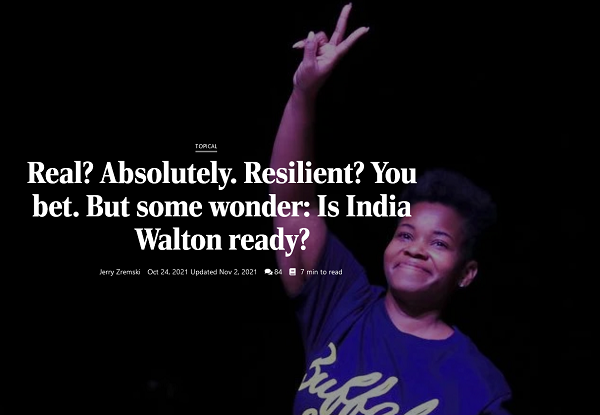 “Is she ready to trade the trash talk of the community activist for the more polite ways of a mayor?” the Buffalo News (10/23/21) asked of Walton. “What would India Walton say to voters who think she’s already proved herself too irresponsible to be mayor?”

And while one lengthy piece (10/23/21) praised her tenacity and commitment to her ideals, it questioned whether she was ready for political life, quoting one activist, “She has an angry temper.” The paper added, “Walton indeed has a history of using raw language in protests and elsewhere,” using “intimately impolite language referring” to a political opponent who had “criticized her call for cutting police funding.”

Another piece (10/17/21), noting that she had softened her “defund the police” rhetoric in her run for mayor, reported that she had been captured on video during a demonstration, chanting: “No justice, no peace. Fuck these racist ass police.”

The newspaper’s coverage of Walton’s colorful language and personal issues falls into tropes about assertive Black women: They are rough, unsophisticated and bullying. Passion about injustice isn’t seen as a natural or even admirable response, but rather unchecked rage that should be kept from official levers of power. 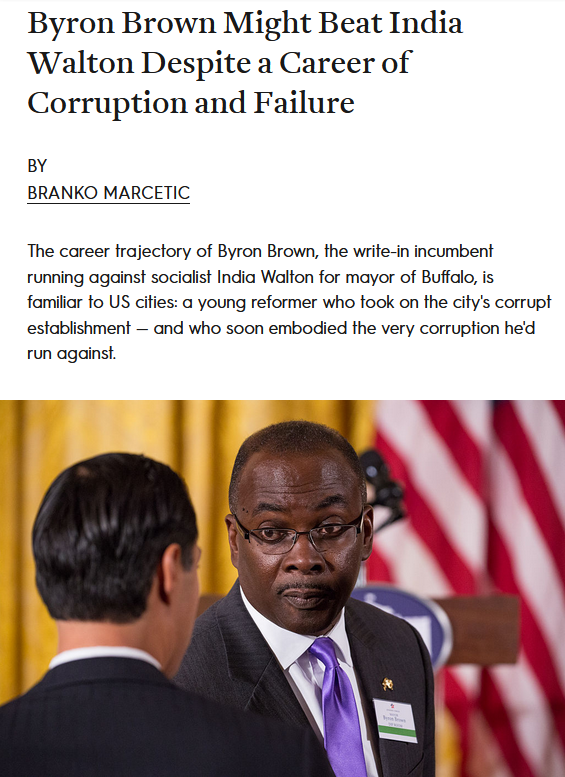 Jacobin (11/1/21) noted that “Brown has successfully turned the conversation away from his own many scandals and misdeeds in elected office to the flaws of his opponent’s private life.”

A newspaper has the responsibility to treat all candidates with scrutiny. Yet, the editorial board’s endorsement of Byron Brown doesn’t acknowledge that he supported former New York Gov. Andrew Cuomo’s pension cuts (Business Council, 2/3/12) and signed a law limiting social services (Buffalo News, 10/4/06), two examples of his role as an austerity mayor. It’s likely that the News just doesn’t see these issues as problems; the editorial board hailed Brown’s tax cuts, for example. As Jacobin (11/1/21) noted, Brown’s tax vision

always favoring bigger cuts for businesses, with commercial property taxes in the city having dropped 28% by 2017. The declining revenue left the city more dependent on federal and state aid to plug constant budget shortfalls, and led to painful spending cuts. By 2020, Brown was denying city workers a 2% raise.
The cuts to Buffalo’s property tax rate could be justified by shifting the tax burden to those who could pay more. But instead, Brown stealthily raised taxes on the working class through hikes on user fees, increasingly aggressive parking and traffic fines, and other aggressive claw-back measures, like late fees on overdue bills—for some, anyway. After six years, Brown’s administration had simply left $22 million of housing fines uncollected for nearly 1,500 property owners who had violated building and health codes, further starving the city of funds while undermining the work of city inspectors.

This didn’t have much impact on the paper’s coverage this fall. 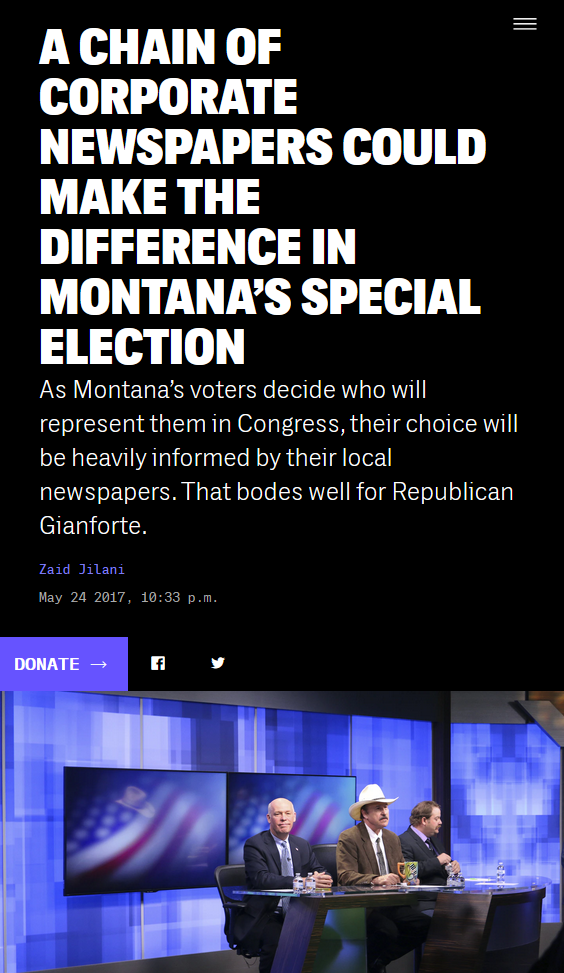 The Intercept (5/24/17) noted that in the race for Montana’s House seat between Republican Greg Gianforte (famous for physically attacking a reporter) and Democrat Rob Quist, Montana’s Lee papers “focused their reporting heavily on Quist’s debt and financial woes.” Gianforte ended up winning the election.

The paper is owned by Iowa-based Lee Enterprises, the fourth-largest newspaper chain in the country; Lee bought the paper from Berkshire Hathaway in 2020 for a reported $140 million (Buffalo News, 1/29/20). The company’s “board is stacked with Republican donors,” the Intercept (5/24/17) reported. The company has clashed with the News union, which went on a byline strike in protest of Lee Enterprises, saying “the company wants the power to lay off any guild workers for any reason,” and “wants to move jobs out of Buffalo” (WIVB, 6/15/21). Historically, according to Open Secrets, the company has backed Republicans, though in 2020 it gave overwhelmingly to Democrats.

Buffalo native Raina Lipsitz, a Nation and New Republic contributor who has covered Buffalo politics and is writing a book about the ascendent left for Verso Books, was interviewed by FAIR about the Buffalo News:

It’s a fundamentally conservative paper that sees itself as embodying an old-school, “voice from nowhere” tone, but actually engages in a lot of fear-mongering about socialism and redistributive policies in general. It is squarely on the side of local developers and corporate interests—it’s both beholden and naturally sympathetic to the business community, and sees business leaders and owners as the backbone of the community. From the News‘ perspective, the last, best hope of moving Buffalo forward is attracting as many big, splashy development deals as possible, which will in turn, the paper thinks, bring more jobs to Buffalo.

It’s the paper of record in the city of Buffalo, and many of its star political reporters are white men in their 60s and 70s. Buffalo is a Democratic town and a union town, and everyday people are often sympathetic to labor. But, as a general rule, the News doesn’t approve of people who go “too far,” and that includes most left-wing candidates and movements. Sure, Black lives matter—all lives matter!—but it’s always wrong, in the News‘ eyes, to make that point too loudly or “divisively.” The News employs a number of traditional Catholics, and has historically been hostile to abortion rights.

November 2021 was not a good month for Democrats (FAIR.org, 11/5/21), as the Republican victory in the Virginia governor’s race indicated they were likely headed for trouble in the 2022 midterms. But it was also a disappointment for progressives and socialists, who had thought that Walton’s election was all but assured. And given the fact that Rupert Murdoch’s New York Post (11/3/21) welcomed Brown’s victory as a “law and order” candidate, Walton’s loss does feel like a win for the right. There were many actors in the political establishment that worked hard to keep Brown in office, and the Buffalo News was definitely one of them.