Corporate Media Harms Not Only Through Omission, But Also by Distortion 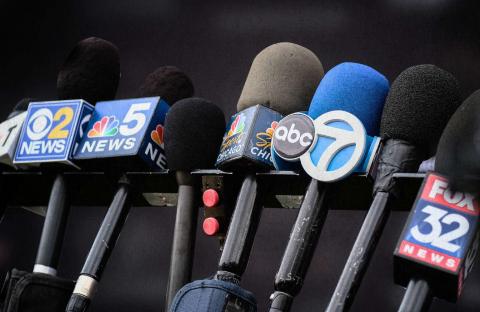 The effects of underreporting or misreporting may ultimately be more harmful than nonreporting.

From The Washington Post’s investigation of the January 6 insurrection to The Wall Street Journal’s series about Facebook and Reuters’ examination of how “qualified immunity” protects police from prosecution for excessive force, establishment news outlets deserve credit for breaking a number of momentous stories in the past year. Yet, the establishment press missed, minimized, or mis-framed at least as many important stories as they covered thoroughly and accurately. That is why our organization, Project Censored, a nonprofit news watch, continues to monitor and identify the top 25 vital, sometimes earth-shaking stories that corporate news media ignore or distort each year.

Past critics have complained that the stories included in Project Censored’s annual lists are not actually “censored” because some of them have been covered by “dozens of publications,” albeit smaller, independent ones. Others point out that stories that appear on our list sometimes receive attention from “at least one major mainstream newspaper, magazine, [or] television news program.” Such criticisms miss the point of Project Censored’s work and gloss over significant gaps, biases and blockades in corporate media coverage that the Project exposes.

The “censored” stories that Project Censored lists in its annual story have not necessarily been completely and irrevocably repressed by the government or some other powerful institution, such as big business or a political party.

Censorship in that specific sense is known in First Amendment law as “prior restraint,” the direct effort to prevent publication or publicization of ideas or expression. That sort of censorship is relatively rare in the United States.

Instead, the independently reported stories that Project Censored highlights as “censored” have typically been subject to partial or incomplete corporate coverage. This indirect censorship is more subtle but no less consequential: The effects of underreporting or misreporting may ultimately be more harmful than nonreporting. Furthermore, an indirect blockade of news coverage need not be total in order for an issue to remain unknown to all but a small segment of the public that actively seeks reporting on that topic. Using stories drawn from Project Censored’s 2020-2021 story list, we identify four recurring patterns of indirect censorship in corporate news coverage where the outlets failed to provide the coverage and context that these stories deserved based on their social significance and relevance to current political and cultural debates.

Consider, for instance, the historic wave of wildcat strikes for workers’ rights since the onset of COVID-19, one story on the Project’s 2020-2021 list. Responding to dangerous working conditions and stagnant wages, tens of thousands of U.S. service workers, drivers, health workers, teachers, and others have taken part in more than a thousand brief, impromptu, unauthorized work stoppages. This recent burst of labor unrest may go down in history as the largest wave of wildcat strikes since the early 1970s. Nevertheless, with the exception of isolated coverage in local and specialized corporate news outlets, for more than a year, until July 2021, establishment news outlets failed to cover these strikes in any depth, much less systematically.

Stories that Project Censored highlights as “censored” have been subject to partial or incomplete corporate coverage. The effects of underreporting or misreporting may ultimately be more harmful than nonreporting.

Without the context of an ongoing, national wave of wildcat strikes, reports of individual work stoppages here and there failed to convey the magnitude of locally organized worker resistance to pandemic working conditions. The only wildcat strike that attracted any sustained commercial media attention up until October 2021 (when reporting by corporate media on the current strike wave began belatedly to pick up) was the August 2020 National Basketball Association players’ refusal to play in the aftermath of the police shooting of Black motorist Jacob Blake; work stoppages following the Blake shooting by WNBA and MLB teams also attracted some corporate media attention.

News that challenges the political and economic status quo is frequently framed as “opinion” or “commentary” by corporate news media. For example, independent outlets such as The Nation, the Guardian and The Intercept have carefully chronicled the efforts of Canary Mission, a scandal-mongering website devoted to demonizing Israel’s critics, and its impact on free speech rights. Dating back to 2019, establishment coverage of Canary Mission and the organization’s McCarthyite tactics has been limited to an editorial in The New York Times by civil rights advocate Michelle Alexander. Similarly, reporting on how factory farming creates a perfect breeding ground for new diseases that can easily spread to humans was covered most thoroughly by small, independent investigative news outfits. Apart from a substantial report published by Vox, the only corporate coverage of note was an op-ed in the Los Angeles Times.

Project Censored’s 2020-2021 story list also includes several topics that were the subject of extensive and well-researched articles in a single major corporate newspaper or magazine but which never got picked up or investigated further by any other major news organization. For instance, Europe’s hunger for biomass fuel made from American forests was the subject of an excellent New York Times article, but no other corporate news outlet so much as ran an op-ed on the topic. The Atlantic reprinted an article from Hakai Magazine, an online journal based in Canada that focuses on ecological issues, about the dire consequences of the darkening of coastal waters, another story on Project’s 2020-2021 list, but no other corporate news outlet paid any attention to the topic whatsoever.

Finally, some of the stories among this year’s Top 25 have, in fact, been completely ignored by the corporate news media. The dangers and legal harassment facing journalists investigating global financial corruption, for instance, has received some attention from the corporate news media outside the United States, but virtually none at all domestically. YouTube’s wholesale demonetizing of progressive channels and video makers has been utterly overlooked by U.S. corporate media, even as they have run several stories about YouTube deplatforming right-wing pundits and politicians.

The Need for Independent Media

Corporate news media are guilty of both “sins of omission” (neglecting significant facts about important issues, failing to follow up on stories that challenge the status quo) and “sins of distortion” (framing news that contradicts conventional wisdom as “opinion,” failing to interpret clearly interrelated events, such as the recent spate of wildcat strikes, as part of an overarching trend). This record of establishment press failure — amply documented by 45 years of Project Censored’s annual story lists — underscores the vital necessity of independent news reporting. In counterpoint to the corporate media’s narrow definitions of who and what count as newsworthy, which often reinforce deep-rooted inequalities, independent news outlets bring to light newsworthy stories that simultaneously expose social injustices and highlight compounding gaps and biases in corporate news coverage.

Andy Lee Roth is associate director of Project Censored, where he coordinates Project Censored’s Campus Affiliates Program along with Steve Macek. He is a contributor to State of the Free Press 2022, the Project’s most recent yearbook.

Steve Macek is professor of communication and chair of the Department of Communication and Media Studies at North Central College. He is a coordinator, along with Andy Lee Roth, of Project Censored’s Campus Affiliates Program and a contributor to State of the Free Press 2022, the Project’s most recent yearbook.