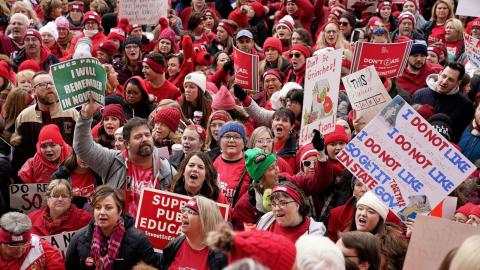 The local unions representing Anderson, Avon and Martinsville school districts and the teachers that lead them filed a lawsuit two weeks ago in Indiana's federal Southern District court challenging Senate Enrolled Act 251. The law would set out a new process for the collection of teachers union dues, requiring teachers to annually complete a three-step process to have union dues deducted from their paychecks.

Previously: Teachers unions are trying to block a new state law they say is 'punishment' for activism

In a statement emailed to IndyStar at the time the lawsuit was filed, Rokita said he would "stand up to protect the individual liberties of hard-working Hoosiers."


Instead of signing a form and turning it into the union officers, the new law would require each teacher to sign a form created by the office of the attorney general. That form would have to be submitted to the school district, and central office staff would have to email each teacher to confirm the receipt of the form. Teachers would then have to reply back, reaffirming their wish to have their dues deducted.

Previously, the union sent a list of all teachers who had signed up to the district.

Call IndyStar education reporter Arika Herron at 317-201-5620 or email her at Arika.Herron@indystar.com. Follow her on Twitter: @ArikaHerron.