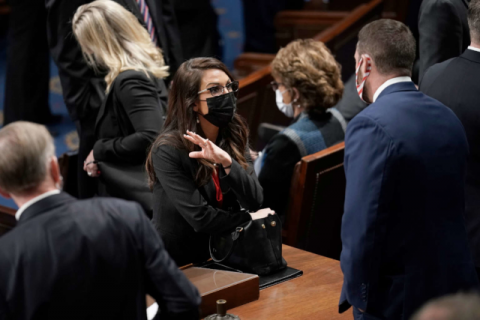 Rep. Pramila Jayapal (D-Washington) has called for investigations by the House Ethics Committee and the Office of Congressional Ethics into Representatives Lauren Boebert (R-Colorado), Mo Brooks (R-Alabama) and Paul Gosar (R-Arizona) for their roles in “instigating and aiding” the attack on the Capitol on January 6.

Jayapal lays out the Republicans’ social media posts, speeches and known ties to extremist right-wing militant groups in letters to both congressional organizations in order to demonstrate the need for and urgency of the investigation.

“It is critical for the functioning of Congress — and therefore the functioning of our democracy — that this investigation is conducted,” she writes. “I urge the House Committee on Ethics and the Office of Congressional Ethics to thoroughly investigate Representatives Boebert, Brooks, and Gosar’s conduct, and refer any appropriate findings to the Department of Justice.”

Boebert, Jayapal points out, tweeted, “Today is 1776” on the day of the attack, and came under fire in the ensuing days for tweeting about the location of House Speaker Nancy Pelosi (D-California) while pro-Trump militants were breaching the Capitol. Jayapal also points to similar tweets about Pelosi’s location from Brooks. The lawmakers at the time were under strict instructions to not post about the locations of members of Congress.

Pelosi was a particular target for some of the militants at the Capitol that day, as the impeachment managers in former President Donald Trump’s Senate impeachment trial stated. Boebert has also been facing backlash this week over an anti-Pelosi ad that features a prominent gunshot noise at the end.

Jayapal lays out Boebert and Gosar’s ties with the far right militant groups the Three Percenters and the Oath Keepers. Members of both groups have been charged by the Department of Justice (DOJ) for their roles in the attack. Boebert has posed for pictures with Three Percenters and has been seen at a political gun rally with them.

Gosar, Jayapal writes, has had an even more direct relationship with inciting far right militants into action. “In September 2020, the leader of an Arizona chapter of the Oath Keepers said that, ‘We asked [Gosar] flat-out, at that time, do you think we’re heading into a civil war? … And his response to the group was just flat-out, We’re in it, we just haven’t started shooting yet.’” In the months leading up to January 6, the DOJ has found that some members and leaders of the Oath Keepers were keeping a close eye on Trump’s words, waiting for his permission to strike.

All three lawmakers have made comments publicly, Jayapal notes, that appear to be encouraging action and violence from groups that had been preparing for the attack for weeks or months. “Today is the day that American patriots start taking down names and kicking ass,” said Brooks at a rally in D.C. on January 6, urging the crowd to go to the Capitol. “Are you willing to do what it takes to fight for America?”

Jayapal’s letters come days after Rep. Zoe Lofgren (D-California) released a nearly 2,000-page report that reviews the social media accounts of Republican House members who voted to overturn the results of the presidential election during the months surrounding the Capitol breach. “Like former President Trump,” Lofgren wrote, “any elected Member of Congress who aided and abetted the insurrection or incited the attack seriously threatened our democratic government.”

The report is thorough and features 123 pages of social media evidence of Brooks and 176 pages of evidence of Gosar making statements denying the results of the election, supporting Trump’s efforts to question vote counts, and calling President Joe Biden an “illegitimate usurper.” The analysis spans less than three months. Gosar and Brooks have also been named by one of the right-wing organizers of the mob as figures who helped him plan the attack.