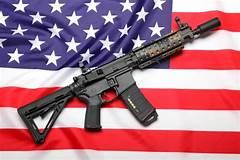 It's a hard sell to call the US the greatest country in the world when politicians are allowing children to be murdered by 18 yr olds with assault weapons!

It's a hard sell to call the US the greatest country in the world when an 18 yr. old with an assault weapon kills mostly African American customers and staff because of his hatred for blacks! I could go on & on.

That's just two mass shootings and massacres in the last two weeks out of over 200 mass shootings in the US so far this year. The US has the highest per capita incidence of gun violence & deaths in the developed world! The Republican politicians are doing absolutely nothing to pass sane gun laws! The people must demand it for the safety of our children & other citizens, and the future of this country! The world is watching!