Opinion: This climate change contrarian gives us an important reminder about science in general 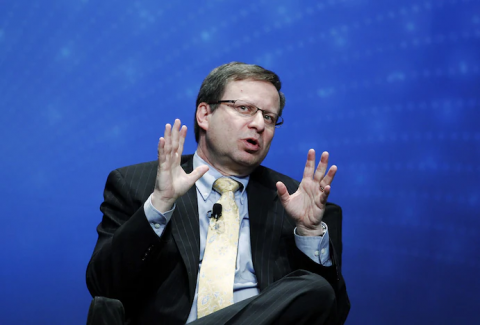 Steven Koonin, then under secretary for science at the U.S. Department of Energy, speaks at the 2011 CERAWEEK conference in Houston. (Aaron M. Sprecher/Bloomberg)

Cliches, however shopworn, can retain their usefulness provided they continue to describe their object with some accuracy. One cliche that has lost almost all value is “speaking truth to power.” These days, it almost invariably is attached not to an act of genuine courage but to its opposite, the spouting of some politically favored bromide. The speaker runs no risk of negative consequences from any power, individual or institutional; on the contrary, lavish praise and short-term celebrity are assured.

Steven E. Koonin is a genuine example of someone daring to challenge a prevailing orthodoxy. Impeccably credentialed both scientifically (New York University physics professor; National Academy of Sciences member; chief scientist for BP, focusing on alternative energy) and politically (undersecretary for science in the Obama Energy Department), Koonin has written probably the year’s most important book.

Not because of its conclusions about climate, about which his contrarian views might be completely wrong. Rather, because “Unsettled” is surfacing the anti-intellectual, burn-the-heretic attitude that has infected too much of the academic and policy worlds.

The ad hominem epithets began flying from the moment the book was published last spring. He is a “crank” and a “denier” who thinks climate change is a “hoax,” according to a dozen scientists writing in Scientific American.

That is false: Koonin stipulates firmly that Earth’s climate is changing and becoming warmer, and that human influence is playing a role. He is eager to identify and advocate actions that will address these changes effectively. But he is deeply troubled — “appalled” is one of his terms — by the misuse of science, his life’s work, to persuade rather than inform, and by the near-hysterical pressure to stifle and vilify any deviation from the dogma of the day.

As detailed in The Post earlier this year, the book uses government and academic reports’ own data to challenge the scientific “consensus” — about rising sea levels, droughts, extreme weather — now repeated endlessly and uncritically.

Doesn’t the world face economic catastrophe, absent wrenching, unimaginably expensive actions to reduce greenhouse emissions? Not according to Koonin, who cites the United Nations’s own report stating plainly that any such effect would be minor at most and decades away.

Koonin also points out how wildly climate computer models disagree with each other. Having written one of the first textbooks on such modeling, he is especially harsh on the “fine-tuning” of models to adjust for unwelcome findings. He says that such manipulation often crosses the line into “cooking the books.”

We have never expected much truthfulness or integrity from our politicians, whose self-interest in publicity and campaign dollars too often outweighs any scruples about scientific precision. Nonprofit “public interest” groups raise fortunes on forecasts of doom, often on the flimsiest evidence. The modern news media, chasing the dollars that titillating, click-catching headlines bring, have been, if anything, worse than the political class in discussing climate change. Koonin serves up multiple examples, with descriptions such as “deliberately misleading” and “blatantly misrepresenting.”

The truth’s last line of defense should be the scientific community, but here Koonin indicts those of his fellows who have discarded a commitment to the truth — the whole truth, and nothing but — in favor of their own view of wise policy. “Distorting science to further a cause is inexcusable,” he says, a violation of scientists’ “overriding ethical obligation.”

Even if such people ultimately prove right, and Koonin wrong, about climate, he is correct to label their willful distortions “dangerous” and “pernicious.”Scientific research has already suffered serious self-inflicted wounds over recent decades. The discovery that as many as half of all published paperscannot pass the basic test of replication has yet to be meaningfully addressed. Researchers’ deep financial ties to foreign funding sources raise the specter of compromised security and integrity of results.

An ethical and responsible scientific community, including those who strongly disagree with Koonin’s findings or conclusions, would welcome his book as the latest contribution to an important debate. As vital as identifying the best climate strategy is, a broader issue involves the willingness of scientists, and the citizens who seek their advice, to tolerate — and maybe even welcome — the dissident who has the courage to speak the truth as he sees it to the powers of his a

The calumny and name-calling that greeted Koonin’s book has helped to make his point. One must hope that his courage and sense of scientific morality, if not his specific viewpoint on climatology, will prevail. Knowledge advances only through the collision of hypotheses and the facts that ultimately prove one theory superior. Galileo, not the high priest Inquisitors who condemned and ostracized him for his heresies, is the person we remember.